Why are Jamaicans so Fast? Interview with Donovan Bailey

You are here: Home / Coaching / Why are Jamaicans so Fast? Interview with Donovan Bailey
47
SHARES
FacebookTwitter

It’s a long read, as he interviews 1996 double gold Olympic Champion Donovan Bailey and asks the old question, “Why are Jamaicans so Fast?”

For the full article, click here.  I’ve copied (with permission) the portion on the Jamaica question.  The rest of the article pertains to Canada, UK, Canadian sprinters and the Canadian Relay Program. (recommended reading)

Also, for a cool infographic, check out Why are Jamaicans so Fast at Running? from last summer. 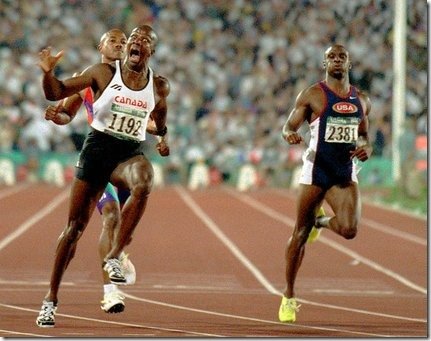 Stuart McMillan: With CHAMPS this year celebrating their 100th anniversary, why is it that we have only seen sustained international success over the last 6 or 7 years?

Both Linford and I learnt at an early age – being born in Jamaica, and moving to first-world countries – that the culture of Jamaica – the infrastructure that was here at the time – and still is – instilled in us the attitude that we would be the very best we could be.  We were exposed to the very best right from day one.  It was expected of us.  Linford dominated because that was his attitude. Because of his upbringing, he understood that he could show up and dominate.  I grew up in the exact same way.  Competing at Champs gives you the confidence that when you compete on the big stage, you are not scared.  From the time you are 12, 13 years old, you are competing in front of 50,000 people inside a pressure cooker.  World Championships and Olympic Finals are just extensions of that.  At 13, 14, 15, 16 years old you have to deliver for your school.  It’s huge pressure…

SM:  Sitting out there last week, that’s what I was thinking….these kids must be feeling comparable pressure as to what you felt back in ’96 in Atlanta…50,000 people going crazy, and they’re just kids

SM:  So do you feel, then, that if you had moved to Canada when you were five – instead of 12, and had your early competitive track and field experiences in Canada, and not Jamaica, do you think you would have enjoyed the same success later on?

See also  Derek Evely: 10 Great Tips to Succeed as a Coach (and Change our Sport)

DB: I think psychologically I still would have been pretty strong.  My parents taught me to be a very strong person mentally. Whatever I pursued, I had to give it my all – whether it was in the classroom, or basketball, or whatever.  However, the kids now – just because of the pressure they are subject to – and the immense depth that now exists in Jamaica means they’re taking it to another level.  We’re just seeing the beginning.  But to answer the question, I personally feel that in my situation, I would have excelled in either country because of the values that my parents instilled in me.  The present culture in Jamaica obviously makes it easier for everyone today though.

These kids are also technically sound – they’re being taught the right things.  Coaching has gotten better in Jamaica.  I know for a fact that some of the people in Jamaica that have not got enough credit are those that went over the the States in the 80s, 90s, and early 2000s on scholarships who were incredible athletes who have now returned to coach  and to teach.  And these guys don’t get enough credit.

The grassroots training in Jamaica is the very best in the world.  The very best.  No other country is even close.  The sport matters here.  From children of 4, 5, 6 years old – training for track and field matters.  It’s like hockey in Canada, or basketball or football in the US.

SM:  If you took Champs away.  Took the Regionals away.  Took away Gibson Relays.  And it just became a participation sport…even though the sport is still huge – it is still loved – say the way the sport is loved in the UK – without that nadir of competition to strive towards, do you think we would see the kind of athletes we saw last week?

DB:  No – not at all.  One of the things we are taught now in first-world countries is that it’s all about participation.  It’s different here.  Intense competition provides an expectation.  Absolutely absurd expectation!  Jhevaughn Matherson, Kimone Shaw – these are kids that are 12 and 13 years old, and they’re doing things now that would make most national teams in the world…

SM:  Talk about swagger!  …we watched these guys finish their races, and the cameras are jammed up into their faces, and it’s natural for them.  Like they’re used to it…  these are grown people…

DB:  …exactly, they are getting into their starting blocks as kids and coming out as adults…dealing with adult-like pressures…and they’re delivering – pointing to the stands when they’re done, acknowledging their audience!  You just cannot replicate this –anywhere.  You just can’t…

These guys now are just doing the same things as Usain was doing a decade ago…it’s nothing new.

SM:  You think some of the things we are seeing now – 30 records were set last week – is a lot of that due to Usain?

DB:  I think because Jamaica is a huge track country, I wouldn’t attribute it all to Bolt.  It was started in the late 60s with Donald Quarrie.  Continued through the 80s with Merlene Ottey.

And then Linford came along – a proud Jamaican-born Brit who competed for England – and then I came through, winning and setting a World Record in 1996, and most definitely Asafa must be given some credit.  But yes – a majority of this has to do with Usain, and his popularity.  He stayed home, and achieved tremendous success under his coach Glenn Mills…

SM: So essentially, Bolt was the tipping point…it wasn’t really until he came through – starting doing some truly freaky stuff, when we began seeing some of the performances like we saw last week.

DB:  …yeh – sort of.  From a home-grown talent perspective, Asafa was out there doing damage – dominating.  It is just that he never got that big title. 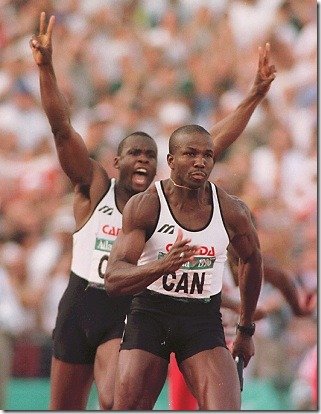 SM: We have spoken of that before…you said that maybe one of the reasons that Asafa has had his troubles in major finals was because he never went through Champs.  He never experienced the pressures that these other kids have…

DB:  Yes – exactly.  you learn very young that there is pressure.  Asafa never went through it, and now on the big stage, he gets scared…while with Bolt now, it’s just another day.

SM:  One of the reasons why a lot of the American sprinters all seem to show up at big meets is because they’re used to being challenged.  They’re used to the pressures of competition.  They have had to compete their entire lives.  From kids right up to college, where they compete almost every weekend…they learn to COMPETE.

DB:  Absolutely.  But unfortunately for them, they’re competing against an island where track and field is the national sport.  This adds an additional level of intensity.  So they’re not afraid.  When I started to compete, my own teammates were scared of American sprinters.  American sprinters walked in with swagger, saying ‘listen – we’re going to kick your ass’…but I was never going to take a backseat to that.  I had a great coach and a great team around me, so whenever I went into competition, I knew I was ready to compete – and to beat – the very best in the world.

And that’s what Jamaica has now – that SWAGGER.  Saying ‘listen – I have trained.  I am ready.  I have a good coach, and I don’t care who is here.  I’m going to do my thing’.

The greatest thing about the kids competing now is that swagger.  I had that, and some of it rubbed off on other members of the relay team.  Individually, they knew that they were never going to be the best in the world, but they knew that with Bruny Surin and I on there, we could beat anyone.  The confidence is contagious…

That’s what Jamaica has now – they’re not even concerned who they are competing against….they couldn’t care less!  I love that!