Q1: Major League Soccer (MLS) is composed of 19 teams — 16 in the U.S. and 3 in Canada including the newest team, the Montreal Impact.  Back in 1996, when you were the Commissioner, it was only 10 teams.  Can you name a few key items that is making the sport so popular?  People claimed the lack of offence or scoring would be factor (baseball and hockey have higher total scores than in the past) .   The cost of entry is low, so soccer is accessible to any child around the world with a flat piece of land (or parking lot!)

Doug Logan: Factors that have contributed to the growth of the sport in the US include the continued success of the US National team, the ubiquity of youth soccer that gives a potential fan at least a rudimentary knowledge of the sport, the globalization of society in general, which makes a growing sector of the population accepting of the “World’s Sport”, the “Latinization” of the US by immigration, the fact that International soccer stars like Messi and Beckham are also US celebrities, and the ever expanding proliferation of soccer coverage on US cable channels. Low scoring and/or scoreless ties are not a barrier to growth.

In 2001, a group of investors contacted you and asked  to draw up a business plan for a possible National Rugby League. You helped finance the potential deal, but after many attempts Rugby just was not a go.  Today, can you shed some light on how to make Rugby or Rugby 7 popular in USA and Canada?  The sport is fast with pressure to score quickly, clearly a great spectator sport?

Doug Logan:  Rugby 7’s is a very cool sport. I am very pleased it will make its Olympic debut in Rio. Rugby was a natural to replace baseball and softball given its global popularity, particularly in the Southern Hemisphere. Sevens should become more popular in the US after Rio because, as you say, it is fast, high scoring and violent. My good friend, A. Jon Prusmack has invested heavily to bring the International Sevens competition to this country.

The collegiate/club development system has made strides. That being said, there is an old saying; “It’s a long way from the cup to the lips”. Founding a professional sports league in this country is a heavy lift. I have personally experienced both success and failure. It will take a group of patient, dedicated investors who understand that they are putting $35M-$50M at risk with a chance that startup costs may be twice that before there is equilibrium of cash flow. I have my doubts that such a cohort can be put together.

Q3. Now to Track and Field!  We talked about Project 30 in a previous article.  While everyone is familiar with the London 2012 medal count, the standings show a different picture when you score 1-8 place with 8-1 points (8pts for 1st, 7pts for 2nd, etc) What do you think countries are doing to encourage Athletics?  to encourage “excellence”?  and to “Own the Podium”? 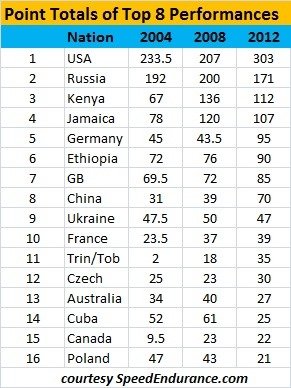 Looking at the numbers (image, left), what is more alarming is the improvement by Germany and China.  They scored more points in 2012 than 2004 and 2008 combined!  Any guesses (or speculation) on their “massive” improvement?

See also  SHIN SPLINTS REDUX: We Have Not Won Anything Yet

Doug Logan:  Let me try to answer your Track and Field question[s] in the following way. We are in a new “quad” with a different administration and, to my knowledge, yet unstated goals and expectations. The last quad, after analyzing the results from Beijing, and doing a review of the developmental side of the sport, I reached the conclusion that American athletes were not coming close to their competitive potential in international competition.

I publicly challenged the federation to reach its potential [arbitrarily measured by 30 medals], reduced barriers to success and developed fiscal resources to reach the goal. I am pleased with the outcome. The current administration will probably not be awarded the Nobel Prize for Accountability and will probably keep their goals, if they have them, to themselves.

The success of the Cross Country teams in Poland last month are very encouraging as was “Doc” Patten’s wind aided 9.75 at the Texas Relays. However, as you accurately point out, the Germans and China are rapidly improving and we are selectively vulnerable to the Russians, Jamaicans in the sprints, and the Cubans in certain technical events. With their massive public funding, you cannot discount the Brits.

I am not going to participate in any conjecture about why others are getting better, mainly because I do not know. I do know that we [T&F fans] should expect our federation to clearly state its objectives and measurements of success.

Q4.  With the 8 year statute of limitations to the Olympics results, we are seeing a rash of positive drug tests from 2 Olympics prior (the 2004 Olympic medalists are now getting busted)  The longer the IOC waits, the more chances of catching them with 7 years of testing technology behind them.  What are your thoughts on “retroactive medals”?  How can an athlete gain financial sponsorship awards when they get bumped from Silver to Gold 7 years later?

Doug Logan:  The real question is whether I approve of retroactive punishment and sanctioning and my answer is a resounding “yes”. The current system of keeping evidence “on ice”, so to speak, should act as a huge deterrent.

Additionally, any sponsorship contract that has bonus provisions for medals should also have an ironclad “claw-back” to be able to get any incentive payments back. I am sympathetic to those who are retroactively awarded medals but even those circumstances can be covered by creative contacts in the inception.

Agents should become more adept at protecting their clients for such a possibility. However, if these transgressions do not stimulate a moral outrage among “clean” athletes and they do not “call out” their brethren when they suspect cheating, this problem will not be substantially resolved. Peer pressure is the ultimate solution to cheating.

This is more of a marketing question… how can we encourage young artists and musicians today?  We can’t expect them to give away their streaming music for free in hopes of ticket sales from live concerts one day?  They can’t live on pennies from iTunes or Spotify?   Lastly, why does music suck today given all this technology?… Because “musicians” aren’t PLAYING anymore, they are too busy Tweeting and Facebooking? (i.e. they’ve become technicians instead of musicians).   Thoughts on this comment?

Doug Logan:  Your fifth question shows respect for one of my passions. Thanks. However, I don’t know what the hell you are bitching about. The state of music is great; different, but great, nonetheless.

Lately I have been listening to Justin Timberlake’s The 20/20 Experience, The Airborne Toxic Event, Frank Ocean, Florence + The Machine, Eric Clapton’s Old Sock, Leonard Cohen’s Old Ideas, LCD Soundsystem, MGMT and have been walking my 5 miles a day listening to dance tracks from Tiesto, Gustavo Santaolalla, and the latest Ultra Dance 14. The old ways of breaking an act are anachronisms, but there are many new ways to get to potential consumers for a relatively low cost of entry.

I should also pitch my son’s [Carter] new band, Bad Rabbit. Recorded music to come but this Dad will be at the Mercury Lounge in Manhattan on May 7th to catch the gig. They have been asked to play at several festivals in Europe this summer.