Beyond the Olympic Medals: Where Do We Go Now?

You are here: Home / Coaching / Beyond the Olympic Medals: Where Do We Go Now?
4
SHARES
FacebookTwitter

I want to elaborate more on Question 3 from Friday’s Interview with Doug Logan.

There’s a famous quote: "No taxation Olympics without representation"

The Olympics should be about representation!  Not just the medals.

But the average TV audience views the Olympics as entertainment, not sports.

So you are probably familiar with this chart, which is what you saw during the TV 2012 Olympic coverage:

Canada sits at 33rd, tied for LAST PLACE for that lone bronze medal (Thank you high jumper Derek Drouin for not embarrassing ourselves).  In fact, that’s what happened in Beijing 2008 with a lone bronze medal from Priscilla Lopes-Schliep’s 100mH.

We spent how much on the OTP program?

You see, most often you care only for the medal count.

But what is also important is scoring the top 8 finalists for some sort of “representation” (some people think it should be top 16, or perhaps it should be all entrants with the IAAF “A” or “B” standard, including the preliminary rounds of the 100 meters.

In a perfect world, like the USA, top 3 from the Trials should go to the Olympics providing you have the minimum IAAF standard (3 with A or 1 with B)

The sprint relays have already started this “elitism”.

The 4×100 and 4x400m relays are already top 16 based on the best aggregate time from 2 permit meets.  There is a good reason for this, and that is for the live TV audience.  2 heats then finals, and that’s it.

A big thank you goes out to Frank Dick at the Global Coaches House for the data below.

But what is more alarming is the improvement by Germany and China.

What are they doing in their National program?

“Buy in” from the federation?

I personally think we need to rethink our grassroots attitude and current coaching system if we are ever going to match the same levels as other countries.  The more athletes you have participating in athletics, the better chance you’ll have in finding the ones with the genetic predisposition to speed, power and strength events (which is 90% of a Decathlon, right?)

If you have better ideas, or know what other countries are going, especially Germany and China, please comment below. 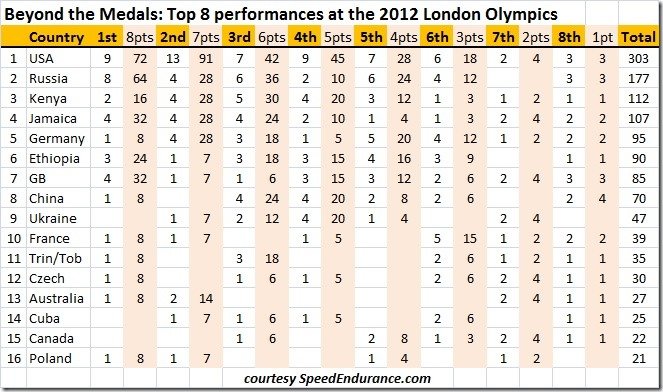 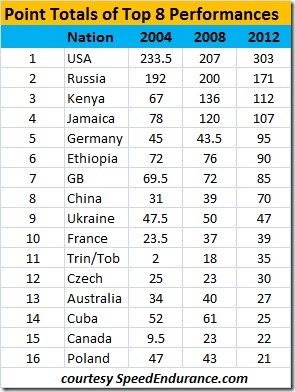