Add Up the Fastest 10 meter Splits and You Get…

You are here: Home / Track & Field / Add Up the Fastest 10 meter Splits and You Get…
0
SHARES
FacebookTwitter

I was inspired to write this article after seeing the erroneous errors from Spikesmag’s infographic titled “The Fastest 100m of all…”.

The errors and misinterpretations are obvious, but nevertheless entertaining. (To me, sports is becoming entertainment, but I’ll save that rant for another day).

For example, they have Kim Collins 0-10 meter split at 1.67 seconds from 2004.  Probably true, but I think that does NOT include reaction time since most elite athletes run the first 10m between 1.83 (Ben Johnson 1988 and Maurice Green 2001) and 1.95 seconds.  (scroll to my chart below and you can how they deduced that number without reaction time)

They also listed Bolt’s last 10 meters from Beijing at 0.86 seconds… and we know he slowed down. 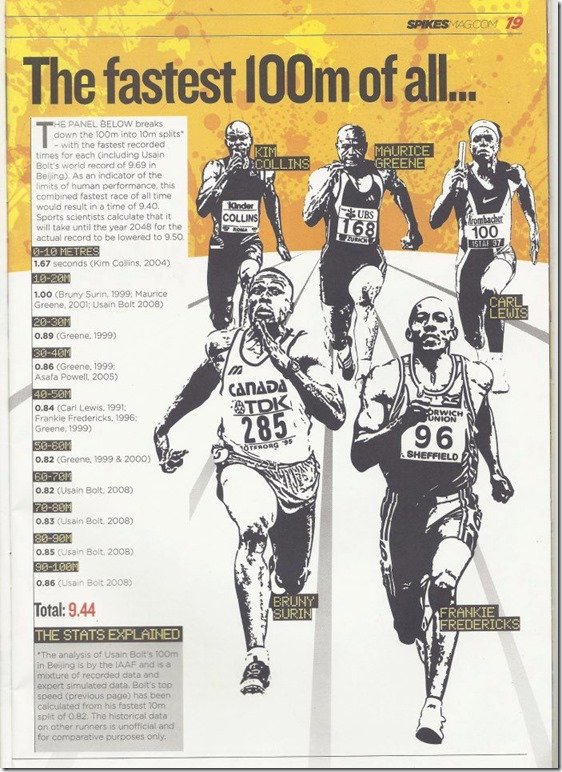 I compared the data from past world records and World Championships, and I even included Tyson Gay’s 9.68 wind aided run from the 2008 Olympic Trials.

Because Tyson actually ran those times.  His body actually covered ground at those splits.  Yes, aided by the wind, but his muscles, joints and soft tissue actually went through the motions to achieve something his body has never done before. (He may have paid the price for it in the 200m heats, where I wrote a detailed article back in 2009)

So let’s get out the scalpel and take a look at my numbers, which differ significantly from Spikemag’s.… Note how I separated the reaction time from the first 10m split.

If you want to remove Tyson’s times, then this fantasy run becomes 9.48 seconds.