This article is guest blogged by Coach and Masters sprinter Chris Lemassif.  Along with Paul Osland, they are the founders of MyRemoteCoach.com

If these names sound familiar to you, it’s because they were part of the Canadian Masters 4x400m M40 relay team (along with Malik Crepsac and Mike Sherar) that set the National record back in 2007 which you can read in my 2007 WMA Riccione experience.

Two years later in Lahti 2009 WMA, they set the 4×400 record again (YouTube video here), this time with Peter Lawson instead of Malik.  Impressive when you consider 3 of them were 2 years older! 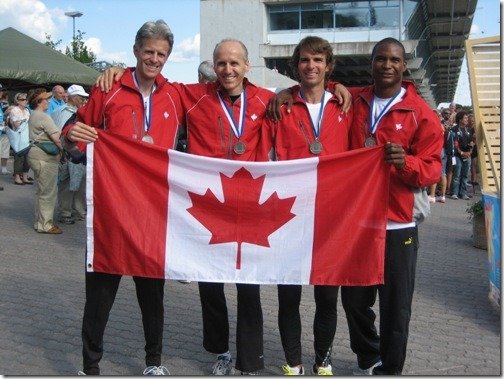 The 400m is a sprint event. As such, most of the training for this race is anaerobic work, speed/power development, and technique. It is very rare for 400m runners to include steady runs in their training. The proportion of anaerobic to aerobic requirement for 400m runners is typically about 75%/25%. A runner’s top speed and ability to run relaxed close to his/her top speed are essential for good 400m performance. However, by definition, the 400m runner does not have to maintain that speed very long, so acquiring a great aerobic capacity is not very important for 400m runners. This is the reason why the 800m runners will usually beat the 400m runners in a 600m race.

800m runners also have to work on their speed, in order to run economically and minimize their level of effort during the first lap. But the 800m is a middle distance event. As such, the training for this event should involve a mix of aerobic and anaerobic work. Contrary to 400m runners, 800m runners have to include a lot of steady runs and VO2max sessions in their training, to develop the aerobic side. This is because the ability to reach the 600m point with the lowest level of lactate is key to winning an 800m race. This is what the 800m training should aim to do: Teach the runner’s cells to metabolize lactate. 400m to 800m repeats with short recovery time are a good way to achieve this. On the other hand, all-out sprinting is included only occasionally in 800m training. The proportion of anaerobic to aerobic requirement for 800m runners is typically about 60%/40%.

To illustrate these differences, let’s compare examples of a May training week for a 47-second 400m and for a 1:48 800m runner (not including warm up and cool down).

Chris Lemassif is a Masters sprinter, Coach and co-founder of MyRemoteCoach.com