Are we following the same outdated style of coaching despite better nutrition, better recovery methods, custom spikes and harder tracks?  You can even add drugs to that equation and we should be seeing a LOT more record shattering performances.  But we aren’t.

It’s time to think outside the box.

So for this Friday Five, it’s time to look at some innovation, and what better person to interview than Movement Specialist and Track & Field coach Adarian Barr of Next Level Athletics and Fitness.  You can read Adarian’s past guest articles here on this Blog.

Whether you agree with him or not is up to you, but feel free to comment below and engage in some discussion.  Like BASF, there is no right or wrong… only better.

Q1.  Back in 2008, I wrote about the Dynamic Warm Up vs. Static Stretching Controversy.  Since then, we have spoken about PALO (which means “STICK” in Spanish) in these three past articles on PALO.  Can you summarize exactly what are the benefits of PALO? 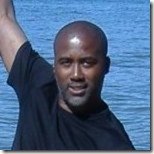 Adarian Barr:  Sure, in three words… Elongation, Rotation and Activation.

PALO is designed to work the whole system (muscles, fascia and joints), not just parts that may isolate one for the sake of the other.

Rotation is needed in order to elongate and elongation is needed to rotate as you activate the muscles in a sequence that teaches the brain a movement pattern.

Humans are torque beings; and torque is rotation or twisting. We are more efficient moving with rotation than we are linearly. Muscle fibers run at angles, not linearly. We have joints that allow us to move the end points of the muscles farther away from each other via rotation. Linear movements keep the distance between the end points fixed which makes it difficult to elongate a muscle.

PALO facilitates a shorter warm up period. With over 1000 stretches and exercises, there isn’t a muscle or joint that can’t be addressed with PALO. Athletes that have used PALO have reported injury free seasons. In addition, individuals have reported an endorphin release that can last up to five hours after just 20 minutes of using PALO.

Q2. Arm action gets a lot of attention these days.  I feel arm action should work together, and not simply pump up and down.    Can you summarize the best way to use the arms, hands and elbows?

Adarian Barr:   In sprinting, rotation of the arms, hands or elbows is the best movement; there are less braking actions, if any, when rotation is used. The best focus point is the elbow as the elbow creates the easiest rotational movement.

An easier, faster and more natural straight line movement could be executed by the following action:

Bring the elbow in towards the midline of the body as it comes forward, try to push it back around on the rearward movement instead on a back and forth linear style.

This helps reduce braking action as rotational movements have natural stopping points; which in turn means energy is not used to brake or slow the movement. Rotational movement also makes the arms move together with fluidly instead of in a different direction which can create a counter balance for force.

See also  What is the Drive Phase in Sprinting? PART 3

Q3.  What’s all this talk about Pelvic Tilt?  Just go to YouTube and you see these Internet Sprint Gurus teaching the importance of Pelvic Tilt. Why is it good?  In addition, I see Long jump coaches try to teach that shorter penultimate stride.  Can pelvic tilt help?

The tilt direction allows for the body to fold up and unfold fast and efficiently.

As you stand up and squat down, the pelvis naturally moves from one tilt to the other.  Pelvic tilt creates internal loading; this is how the body anchors itself for powerful movements. A long jumper having problems at takeoff can be corrected with pelvic tilt angle. A sprinter wanting to create more force at the start can do so with pelvic tilt, in the blocks. Pelvic tilt brings the top and bottom parts of the body together but allows each to move without affecting each other. Pelvic tilt also reduces hamstring strain.

Q4.  In the last podcast with Kenta’ Bell, he talked about foot strike and landing, especially flat footed.  What are benefits of the flat foot?

The manner of which one achieves flat footedness is very important in order for it to have the greatest benefits of rotation or torque. Just as a boxer twists or rotates the fist when throwing a punch to create more power and faster movement, so should we do the same with the feet to achieve the same benefits, power and fast movements. This all comes with flat footed movement. Working from the back end of fifth metatarsal to the front end of the first metatarsal pronation set up via inversion of the foot.

Q5.  (I am running out of questions, as usual).  Let’s go outside the box.  I see on your Facebook feed a lot about your Wacky Insoles.  Tell us about it!

Adarian Barr:   Wacky Insoles allow the feet to move within the shoe as if they are on dirt. Feet have to be able to create strong downward pressure in order to move the body efficiently. Dirt deflects and then compacts, so when the feet are on dirt, the joints of the foot are allowed to operate. When the feet are in shoes or on any other surface, the joints’ movements are interfered with.

The biggest benefit of using Wacky Insoles is the ability to have control of energy usage, direction, and timing. These are the only insoles that are not designed to cushion or absorb energy but instead help reduce energy leakage along with helping one steer the energy in the right direction at the right time. Wacky Insoles allow for an increase in communication between the foot and the brain. Wacky Insoles increase force output by reducing the surface area and may even increase force output through a reduced surface area.

Wacky Insoles take the pressure off of the soft tissue areas of the foot. They reduce strain on the Achilles Tendon by promoting either rotational foot movement or linear foot movements.