If you run Masters Track, chances are you’ve heard the name Bill Collins.

In 2007, Bill Collins was named "World Masters Athletics Masters Athlete of the Year" which was presented at the IAAF gala in Monaco.

In 2011, he suffered paralysis to his legs, rendering him unable to walk, later diagnosed as Guillain–Barré syndrome. As inexplicable as the disease’s cause, was his recovery. After spending the 2011 season in a wheelchair, with the WMA in his “backyard” at Sacramento, in early 2012 he came back to set a new indoor world record in the M60 60m at the USA Indoor Masters Championships.

Bill Collins, along with Rick Riddle, are the authors or the book The Ageless Athletic Spirit (Training With A World Champion) 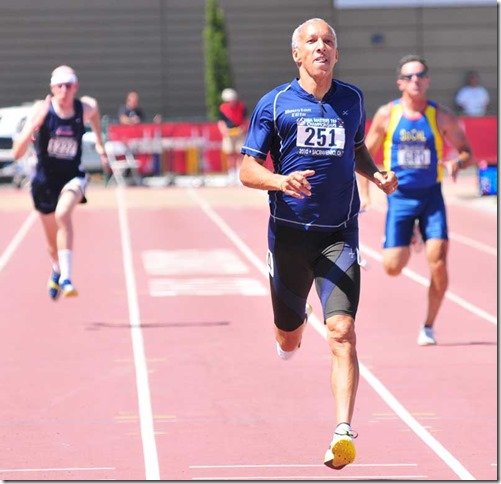 Q1. This question would have been a good question before London 2012, with USA having so many problems in past WC and Olympics.     You were on the 4×100 relay team that won the gold medal at the first ever 1977 IAAF World Cup, along with Steve Williams, Steve Riddick and Cliff Wiley.  Back in those days, how were the relay teams chosen?  How much practice did you have?  Were there as many relay camps?

Bill Collins:  In 1977, we didn’t have a relay camp. The members of the team traveled to different meets in Europe and competed mostly with other runners making up the team. The final team that ran in Dusseldorf Germany was the first time that we ran the relay with Steve Williams on 4th leg.   Steve Simmons the relay coach, was wonderful, the selection came from the USA championship finisher from both the 100 and 200.  Steve looked for the best turn runners first, I was looked at during that time as one of the best starters in the world.  No one could disregard the ability of both Steve Riddick and Steve Williams flat 100 meter speed on the straights. ( a poor hand-off between Cliff Wiley and Steve Williams cost us from running mid 37’s)

Q2. Did you take time off from open to Masters?   Can you give an idea of your training?  (i.e. how much less volume and intensity as compared to an open athlete)  For the 100 meters, how do you balance acceleration (start & drive phase), top end speed, and speed endurance?

Bill Collins:   No, I has been training and competing since 1967.  Many things have changed from those days, the body has aged, the mind has much more knowledge of the sport, tracks and training equipment has improved in every aspect.  As you age things change, the volume of work drops off and your intensity level in workouts are cut back, this is mainly to avoid injury and hopefully save the legs for race day.  Nothing much else has changed, as for the 100 meters you still do all the same things just at a little slower rate, you still work on having a good drive phase which set up the body for acceleration phase that leads into the run.

Bill Collins:   You are correct as it comes to your calculation on the attrition rate, but you do have a few athletes that break those rules.  It’s a great standard for the majority of athletes running today.

Q4. Are starting blocks overrated for Masters?  Masters athletes don’t have the same amount of strength and power as open athletes, and maybe they should be using a 3 point or 2 point start?   You’ve set records using a standing start!

Bill Collins:   Started blocks are okay up to a point, for those 70 plus athletes I would look at going without blocks. Many of the 70 plus athletes that I work with have all gone to a standing start.  Even here you will find a few athletes that will be the exception.  I was able to developed a good standing start, that was due to the fact that I had pulled stomach muscle at the time and could not get down in the blocks.  Without blocks for most of the younger runners, it shortens your drive phase.

Looking forward to getting my health back to 100% after my battle with GBS and just have fun running.  We have a lot of great masters athletes running today.   The 100 record in my age group as well as the 200 and 400 are very good records, by some great runners so nothing is going to be easy if those records are broken.