Thank you Ian Dube and Mike Goss from USATF-GA (Georgia) for this Vince Anderson podcast. 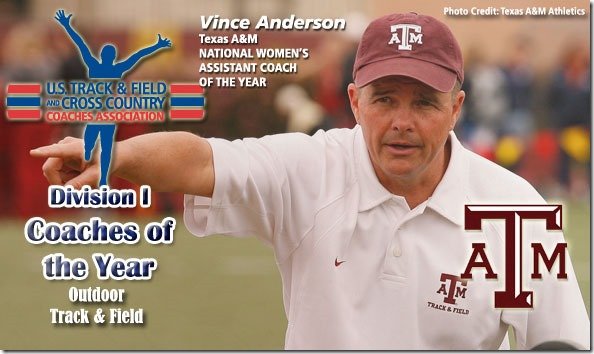 Vince Anderson, the assistant coach at Texas A&M University, is a world class sprint, hurdle and relay coach. He has coached a number of athletes to NCAA and US national titles, including Leonard Scott, Jabari Greer, Justin Gatlin, Gary Kikaya and most recently, Muna Lee, the 2008 US Olympic trials champion in the women’s 100m.

Prior to his current position at Texas A&M, Anderson established an outstanding coaching record across 16 years at the University of Tennessee. Vince has also coached a number of world class combined event specialists, including 4-time US national champion Tom Pappas.

Previous article on SpeedEndurance includes Vince Anderson’s Sprint Acceleration and Maximum Velocity as well as a 2008 Vince Anderson Podcast with Derek Evely (prior to his UKA stint).  Both the article and podcast are long reads (the ‘08 Podcast is over 80 minutes long) and highly recommended!

This podcast is over 70 minutes long, and since I’m not a fan of multi-part articles, it is presented as a whole.

Grab a drink and enjoy!