Part 13 was Jothy Rosenberg, of Who Says I Can’t? 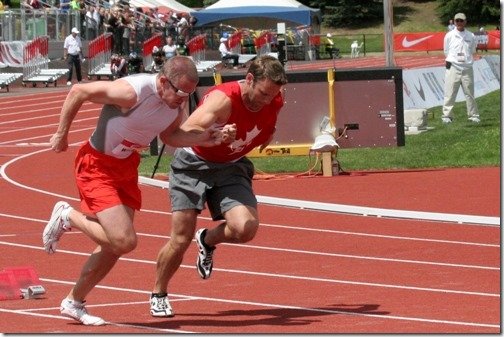 It was with great pleasure to interview one of my former coaches, Kevin Tyler.  Now I get a chance to interview a former teammate and friend, Steve Walters.

Between the years 1997-1999 when I was running Masters, a very young Steve was just getting started on his open career.  His best 400m was 47.5 at age 21, but eventually tore his hamstring 3 times in 4 years. It’s hard to make progress when you are constantly injured.

In our group, Steve was also a training partner for Shane Niemi, which helped Shane to six straight national championships in the 400m and a Canadian record of 45.52 seconds that stood for four years until Tyler Christopher came along (also coached by Kevin Tyler, with a Canadian record of 44.44 which still stands today)

In Oct 2004, Don Steen, a national team coach and father of decathlete Dave Steen (1988 Decathlon Olympic bronze medalist), approached Steve to be a guide for Dustin Walsh, who had placed fifth at the Paralympics that summer in Athens.  Thus begins an 8 year friendship and bondage that is held literally by a piece of lace between two hands.

Q1:  I want to talk about one of the top headlines from the London 2012 Paralympic Games.  Terezinha Guilhermina of Brazil was a DNF as her guide Guilherme Soares de Santana *fell* in the Women’s 400m – T12.  The good news is she came back a few days later and won the 100m final.  This is probably one of the biggest nightmares for any guide, no?  What were your thoughts on this?  Has it ever crossed your mind, for example, pulling a hamstring and your athlete gets a DNF? 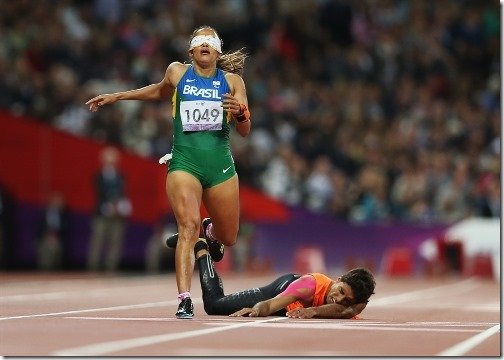 Steve Walters:  Unfortunately due to injury I was not able to participate in the 2012 Paralympic games and was not present to see the race you refer however, I did hear of the disqualification in question. This is not uncommon at major events for these incidents to happen. I found speaking with other guides from other countries that sometimes they do not have the repetitions necessary to be a cohesive unit and overcome the stress of running at high level competitions. It is extremely unfortunate for Guilhermina and unfortunate for her guide as well but they must remember that they enter the event as a team and they fail and succeed as a team. Guilhermina is an exceptional runner and will have other opportunity and as you stated she was successful in the 100m a few days later. With concerns to Dustin and I it was imperative that I was at my best for him at the start of every race and training session. Saying that no matter how well you take care of yourself injuries happen. The truly unfortunate part is that a guide can’t help but feel bad as any injury affects the visually impaired athlete as well. There were a few occasions that Dustin and I had to scramble to get another guide to help us out when I was on the shelf with an injury.

Q2:  You’ve had a DQ once with Dustin Walsh. Can you give us a quick summary of the rules for being a guide, and give us some tips for not getting DQ in the process?

Steve Walters:   Dustin and I were originally disqualified in the 200 meter final of the 2007 Canadian Championships, however, we challenged the ruling and it was overruled. The official who called it was at the 70 meter mark of the homestretch and called the infraction on the curve which was not her area of responsibility. So Dustin and I had a clean sheet for the 8 years that I ran with him. There are rules in place which guide and athlete must abide by. Guides are not allowed to lead their athlete and should not be in front at any time. That said there is obvious room for error as it is two different bodies trying to run in symmetry at very high levels of speed. Guides can run on the inside or outside of the athlete and half to stay within a half meter of the athlete. We are given two lanes however we are judged off the inside of the two lanes given to us. Dustin often ran 4 or 5 extra meters as he was on my outside however if I stepped on the line Dustin is DQ’d even though he is not even close to the line.

[JIMSON’S NOTE: Thanks for clarifying the DQ situation, as I never heard the full story]

Q3:  As far as training and racing, obviously you must be in better shape than your athlete.  Do you feel like you are a team?  (Guides are now eligible for a medal too as of 2012) Or, do you purposely rest a bit more and save yourself for the rounds (and to some extent, multi-events in multiple days)?

Steve Walters:   Obviously being in shape is very important, I prided myself on being prepared to run with Dustin at every practice or competition. Saying that on occasion Dustin would have a better day than I and I would have to drop the tether and let Dustin finish the rep on his own (last twenty or thirty meters). It’s true that a guide has to be faster than the athlete, teams that are similarly paced often struggle toward the finish as the guide is struggling and unable to give verbal commands etc. because of the strain they are under. Dustin and I always thought of ourselves as a team, I was there to help him through the race, give the necessary feedback but at the end of the day it was Dustin’s race. I am happy they are handing out medals to guides now. They have been doing it for cycling guides for quite some time and I feel as though we are on an even playing field. 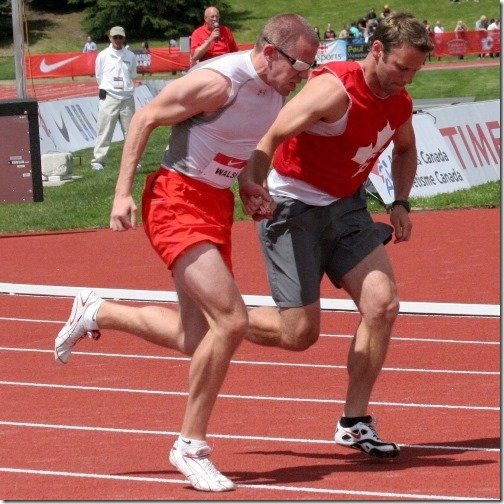 Q4:  Another dilemma (of being both the coach and guide) of getting your athlete too good is, he may out-run you one day and the paralympian may need a faster guide, thus you lose your job in the process.  At what point do you find a new guide?   (NOTE: Women can use male guides)

Steve Walters:   I tried to keep myself in two to three second faster shape than Dustin so that even if I had a bad day I would not inhibit Dustin’s chances. It should be noted that I knew there would be a time when Dustin and I would reach that point where he would regularly outrun me. During the 2012 season this happened regularly in practice, Dustin was extremely fit and in amazing shape. We needed two guides to be able to maximize Dustin’s workout because I would of held him back if it was only me.

I was 36 and Dustin was 28, I was dealing with the stresses of raising a family and switching careers from fitness training to law enforcement. I was now unable to give Dustin the necessary time needed to complete his vigorous workout schedule. We brought Dylan Williamson into our training group in early 2011 and he has transitioned nicely into the lead guiding role with Dustin. In May of 2012 I suffered a season ending foot injury but thankfully Dylan was there to pick up the slack and he and Dustin went on to have an extremely successful 2012 season. Moving away from the sport has been difficult, I thought I would be guiding Dustin until he decided to retire. I miss the traveling, competing and camaraderie of the entire team. I personally wasn’t ready to leave but my body told me otherwise, you can’t out run father time!

Q5: On training strength and weakness.  How do you teach MaxV when the athlete can’t see?   Or, do you focus more on speed endurance?  How do you teach something that is literally hard or impossible to explain? (i.e. what does a tomato taste like?)

Steve Walters:   This is a very good question and thus very difficult to answer because I believe every blind athlete learns differently. Dustin has essentially been blind since birth, he had some sight up until the age of 5 but after that his world was black. This made teaching the A, B’s and C’s of running difficult as we all rely so heavily on our sight for feedback. We constantly watch the best in the world at their respective sport and attempt to emulate what they do when we do ours. With visually impaired runners you are forced to be extremely patient while you break down all components of anything you are attempting to teach. I always tried break it down and explain it properly and I would physically grab Dustin’s foot and put it through the running motion so he had some clarity as to what was trying to be explained. Dustin is very sharp always asking the right question and almost analytical to a fault. He was taught how to do Olympic lifts and because our coach at the time explained it to him properly he is one of the best Olympic lifters I’ve seen. It is truly incredible. Dustin’s visual impairment has not inhibited his ability to learn, it has however helped coaches develop new strategies to teach. As far as the breakdown of Dustin’s training season, it was handled the same as if he were a sighted 400 meter runner. Components of speed, speed endurance and specific endurance did not change because of his visual impairment.