It is a well known fact that according to the rules of the International Association of Athletics Federations (IAAF), in certain sprinting and jumping events, for a record to be deemed valid, the assisting wind (if it exists) must not exceed a speed of 2m/s. More specifically, this rule refers to the 100m, 200m, 100m and 110m hurdles, the long jump and the triple jump. One can see the logic as several studies have shown that wind assistance can have an effect on performances both in sprinting and in jumping. But how significant is this effect and more importantly, should it be taken into account for other track field events?

Several researchers have looked into the advantage gained by tailwind. The majority of studies concern the most popular event in track athletics, the 100m dash. It has been estimated that an assisting wind of 2m/s improves a performance by approximately 0.1s compared to that achieved in still conditions. In [1], it is calculated that if Usain Bolt had been assisted by the maximum legal wind of 2m/s rather that the 0.9m/s registered on the day, he would have clocked a world record of 9.53s, 0.05s under his actual time. We can use this information to quantify the effect of wind on the 100m event. A maximum legal wind of 2m/s will improve performances by roughly 0.1/10 = 1%. 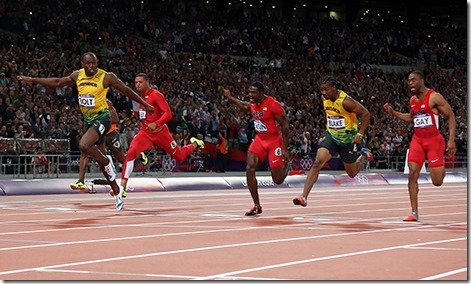 Similar studies (see for example [2]), have shown that the increase in the range of a long jump for a maximum allowable wind, is of the order of 0.12m to 0.16m. Assuming a jump of 8m, we can estimate the percentage increase in range as approximately 0.14/8 = 1.6%. In fact other studies show that the actual increase may be three times less, in which case we would obtain an increase of just 0.5%.

So for the 100m sprint and for the long jump, probably the two most talked about events when discussing wind assistance, the actual improvement is not more than 1-1.6%. Let us now have a look at two of the most popular throwing events, the javelin and the discus throw. A freely available tool for analyzing a javelin trajectory has been developed by Les Hatton, former Chair in Forensic Software Engineering at Kingston University, UK, (now retired) and is available at [3]. With this easy to use software, based on a complex mathematical model, one can simulate the trajectory of a javelin for various conditions, including the presence of a tailwind. I used the tool to obtain the range under still wind and with a tailwind of 2m/s. In both cases I set the same initial conditions (such as the release speed and angles) typical for a javelin throw. In reality of course the athlete would adjust those conditions for the change in wind but nevertheless, this simplified method can provide us with a rough idea of the wind effect. For the case of no wind, I obtained a range of 80.58m and for the tailwind case, 89.8m. The distance gained is therefore 89.8-80.58 = 9.22m, which as a percentage gain will be 9.22/80.58 = 11.4%! Yet, this acquired increase is deemed 100% legal by the IAAF.

For the discus throw, an interesting phenomenon is observed. One would think that throwing into a headwind would degrade the overall performance. In fact, if thrown correctly, the discus will fly a few meters longer. The reason for this is that although the air resistance (more scientifically known as drag) will oppose the motion, another force perpendicular to the motion will also increase in the presence of a headwind. This force is lift, which by constantly having an upward direction actually makes flight possible; a higher value of lift produced by the headwind, means that the discus will spend more time in the air thus travelling further. Experienced athletes will take advantage of this in order to increase the range of their throws. One study [4] has shown that for a headwind of 17m/s the range will increase from 74.08 to 84.29m, i.e an advantage of 10.21m. As a percentage this will be 10.21/74.08 = 13.8%. Admittedly, 17m/s is a pretty strong headwind, but even a headwind of 2m/s will offer an advantage of 1-2m, i.e at least of the same order of magnitude to that offered to sprinters and long jump athletes.

So, the next time you are watching track and field events, just think about it. A 2.1m/s wind on his side offering an advantage of approximately 1% could deprive Usain Bolt of his next world record. Nearby a javelin that is thrown in the same direction is carried forward by an additional 10% of distance and a world record is broken! Who said that life is fair?

Note: For a more detailed analysis of the effect of external conditions on sports, see Chapter 7 of my book, An Introduction to the Physics of Sports