The Effect of Wind on Curve Running

You are here: Home / Coaching / The Effect of Wind on Curve Running
19
SHARES
FacebookTwitter

May 20, 2013 by Vassilios McInnes Spathopoulos 3 Comments

He also wrote Windy Records in Track & Field and I wrote Curve Running – The Ultimate Guide so this is a great article on WIND and CURVE.

The Effect of Wind on Curve Running

The effect of wind on the performance in the 100m dash has been discussed in a previous article of mine. From a physics point of view the analysis is quite straightforward, assuming that the athlete experiences an almost constant component of wind when running in a straight line. A tailwind component will have the effect of reducing the air resistance (drag) and therefore making the run slightly easier for the athlete. So at zero altitude a maximum legal wind will approximately shave off 0.1s from the overall time. 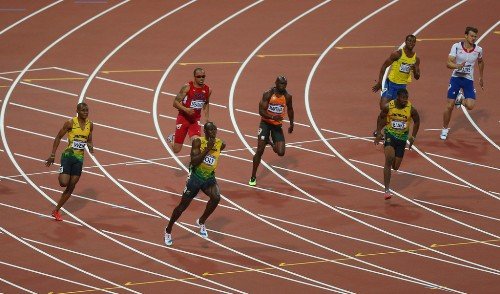 When running in a curve, as in the 200m event, things become a little more complicated. Let us see what actually happens. The IAAF rules state that it is only the component of wind along the final straight that is measured (from the moment that the first athlete enters it, for 10s) and this must not exceed a maximum tailwind of 2m/s. Nothing is stated or known about the wind experienced by athletes during the first half of the race. As the angle of their run relative to the wind direction is constantly changing, so will the value of air resistance that they experience during the first 100m.

See also  The Importance of the Standing Triple Jump

Furthermore, different wind conditions will register as being the same when measured by the wind gauge positioned on the final straight. So for example, a straight 2m/s tailwind, will register the same as a 4m/s crosswind coming at an angle of 60 degrees. It is pretty obvious, that the resistance experienced by the athlete during the first half of the race will be different for both cases.

Finally, due to the curvature, the effect of the wind will also depend on the lane at which one is running, something not seen for the 100m dash case. It turns out that runners in the outside lane actually have an advantage, as the overall wind resistance is reduced.

Has anyone been able to put numbers to all of this? It turns out that compared to the 100m case, there have been fewer studies performed for the 200m. In one such research effort [1], it has been estimated that for a wind blowing down the straight at the maximum legal limit of 2m/s, the actual overall average tailwind experienced over the 200m is approximately 0.95m/s. Also, as different wind conditions can produce the same readings from the wind gauge in the final straight, athletes running in theory under the same conditions can experience time differences due to wind of up to 0.5s. A good combination would be for a 4m/s wind coming from behind at an angle of 60 degrees. This would give a time advantage of about 0.3s, certainly not at all negligible! Finally, both this study and one described in [2] predict an advantage for those running in the outside lane. In terms of exact time, this will depend on the prevailing conditions, but in any case can be quite considerable.

See also  How Much Weight Do You Push w/ Push-ups?

Overall then, it seems as if a strict rule has been imposed on the conditions of a race, conditions for which in the best case, we only have knowledge of for half the race duration. With all the technology nowadays available, it might be time to reconsider offering athletes a more objective deal.

An Introduction to the Physics of Sports (Kindle ebook)

is also available in paperback.