Should Sprinters Do Long Runs?

You are here: Home / Coaching / Should Sprinters Do Long Runs?
215
SHARES
FacebookTwitter

I know I am digging up skeletons from the closet, but a recent article in Spikes Mag brought up a few bad memories.

You’ve heard the myths out there.

One camp says sprinter should NOT do long runs as it would develop the slow twitch fibers and make you slower.  There is no direct transfer of training. If you want to run fast, you have to train fast.  Running at 8 or 9 m/s does not help if you want to run 12 m/s.  Anything over 400 meters, take a taxi.

On the other hand, there is a camp that believes there IS an aerobic component to sprinting, especially 400 meters,  and that you should employ a long to short approach, including running cross country in the Fall.  Clyde Hart and Bud Winter are examples  who believe in this long-to-short approach.

The article in Spikes Mag quotes:

Michael approached winter training with a new-found intensity working with his coach Darryl Woodson and with input from Brooks Johnson. A new plan was put in place, which allowed him to complete all his workouts and still put in maximum effort in the gym. Yet besides the physical, he added crucial mental gains.

“I did a lot of over-distance work: like 30-minute long runs and 800m repeats. I believe, though, that I was finally ready mentally to go out and compete against these guys.

“A lot of people put in the hard work but I had to be prepared to go out there with the lights on and race against these guys with a strong mind and put my best foot forward to compete at the highest level when it mattered.”

See also  Why Usain Bolt is so Dominant (and Tyson Gay, too)

For those who remember, Michael Tinsley went on to win a silver medal at London in the 400m hurdles behind Felix Sanchez.

Like Derek Evely said in this interview, you can’t be 100% absolutely sure that his success was a direct result of the 30 minute long runs, or over distance work.  Maybe he just needed the 10,000 rule of hard training (READ: Outliers: The Story of Success

) to mature who he is today?

I am a firm believer now that you have to be an athlete first before you can be a sprinter.  That means no excess fat or weight, decent range of motion with no mobility or joint issues, and well rounded in all aspects of strength training on the force-velocity curve.

Oh, one more thing.  Don’t show up in October broken.

Even my days training under Kevin Tyler along with Steve Walters and Laurier Primeau , we would have 30 min runs on Saturday followed by 6x100m strides.  At one point, that 30 min became 40 minutes which wasn’t that bad considering we ran trough a trail forest, set my beeper to 20 min, ran until the beep and turned back.

Did I like them?  Hell, no, I hated them.  I would start breathing hard (i.e. Oxygen debt) at the 10 minute mark and just tried to float along while my teammates were busy chatting. 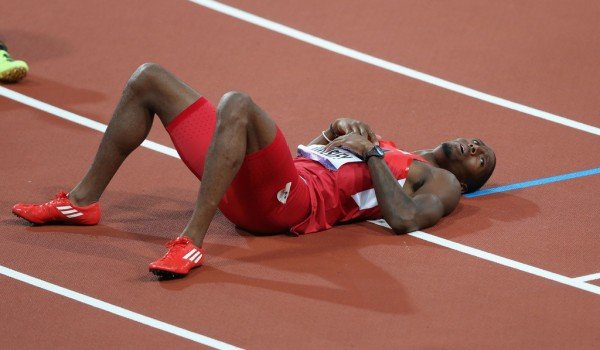 And then there are the rounds.

Most coaches know the importance of fitness when it comes to “running the rounds”.

In the 2007 WMA, for the M45 400 meters, 3 rounds were scheduled on 3 consecutive days. With 86 declared athletes, a fourth “bonus” round was also required. With all the age groups and the number of participants, plus each race requiring 5 minutes for block setup and photo finish results, it would be impossible to schedule the Quarter-Finals right after the Heats on Day 1, so the Quarter-Finals and Semi-Final were scheduled on the same day, 6 hours apart, with the Finals on the third day.

Just like the old Olympic days when the semis and finals were on the same day!!!  You don’t see that anymore.

I am posting this video this because it brings back my great memories from London 2012. I was there!