The Birmingham Diamond League meet is at a critical time of the season for athletes as many of them are coming off their National Championships and Trials the weekend before (namely, USA, Canada and Jamaica). Some are also chasing “A” standards, and others are just making a living.

This year’s Birmingham Diamond League meet has 122 Olympians from London 2012 Olympics, and 31 medalist from the same Games! If you want to sell out your meet, you have to invite the stars. Both Women’s 100mH and Men’s 400mH had all 3 medal winners from London, so it will be a great rematch.

It’s has also been an injury riddled season (i.e. Sally Pearson, Aries Merritt, etc) so this meet is the march towards Moscow, which is only 6 weeks away!

And the weather?  It co-operated in terms of sunshine, but the tricky winds made it a challenge, especially for the jumpers and 400m sprinters.

All eyes were on 17 year old Yoshihide Kiryu and his hot pink shorts in his quest to break 10 seconds. Incidentally, Kim Collins is 37 years old making this a race a 20 year differential!

Of course, we were all hoping for a sub 10 or 10 flat performance from the young laddie, but jetlag and nerves probably took over with his 10.56 performance in the heats against real men.  Apparently, this was his first visit outside of Japan.   If there is a lesson to be had, then the moral of the story is not to rush young sprinters.   We’ve seen this happen time and time again.  Just google “Obea Moore 400m” and that is the classic example I point to when the media puts pressure on young talent.

After all, the success of track is talent identification, right?

Thus it was good to see a hope and glimmer of the “return of British sprinting” with James Dasaolu and James Ellington.

Lastly, with the withdrawal of Yohan Blake for the rest of the season, Nesta Carter showed good form in winning with a sub 10 performance today in 9.99 seconds.

And as a special bonus to the fans, there were fireworks when the winners crossed the line (final events only). 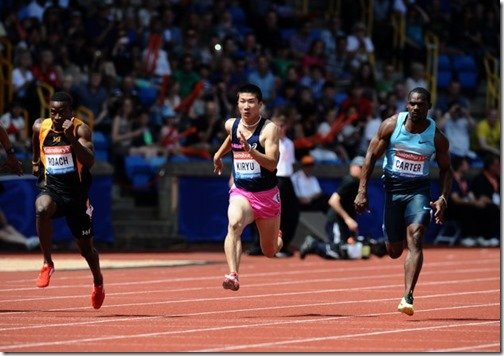 Here is the video from my YouTube TV channel:

Here is the other section of the semi final video on YouTube:

The men’s triple jump was one of my favorites to watch with the return of Teddy Tamgho and a healthy Christian Taylor using a full approach run (unlike Rome where he used a shorter approach run).

The winds were tricky, just like London 2012 and the men’s long jump final, but at least it didn’t rain!

The press area was situated right in front of the pit and it was clear that Teddy had the potential to jump 18+ meters, but unfortunately they were foul jumps.   Thus Christian prevailed over Teddy (17.66m vs 17.47m) in one of the better duals in the triple jump.

All I can say is the Moscow World Championships will be very interesting!  And if a healthy Teddy can nail his approach run, we might even see a world record.

Amantle Montsho was probably the pre-race favorite, but like any playoffs, throw out the stats and don’t count anyone out, especially Christine Ohurogu, which has proven to be a “big meet” contender. Her big 3 meets were all under 50 seconds (2007 WC Gold, 2008 OG Gold, and 2012 OG Silver)

See also  Can You Guess this High Jump Technique?

The race was a photo finish (50.63 vs 50.64) with Christine Ohurogu winning by 0.01 seconds in a photo finish.  Amantle Montsho was so shell shocked she didn’t grant any interviews in the mixed zone.

From my experience, you can’t count anyone out in the 400 meters.  Any sprinter in lanes 1 through 9 has a chance of winning, especially “big meet” performers.