Usain Bolt and the Swedish Relay

You are here: Home / Coaching / Usain Bolt and the Swedish Relay
15
SHARES
FacebookTwitter

With the IAAF Youth Championships around the corner, I thought it would be a good time to talk about the Swedish Relay. 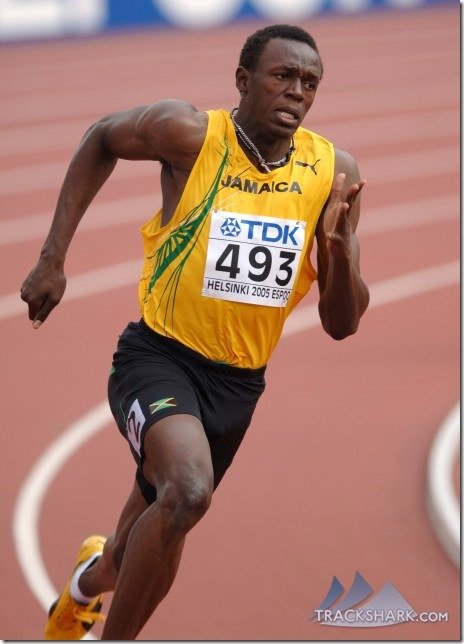 This is more common in International meets, where the 200m legs run in their lanes the entire distance. (Note you run the 200 as a straight-curve, and not curve-straight (See How to Race the 200 meters). Only the 300m legs break for the pole.

The Swedish Relay is a great event as it combines both 4x100m and 4x400m runners. I wish Masters races had this.  Sigh.

The first exchange is critical as it is occurring at near top speed (100 to 200) using the push pass exchange unless you are France.

The 2nd exchange (200 to 300) uses a visual upsweep pass, which is safe and conservative when you consider the incoming runner is tiring.

Thanks to Jason Stayanchi for pointing this out.

In 2001, Michael Johnson was doing his farewell tour by only running relays.  Why not?  With your teammates giving you a lead, it would be very hard to beat as you would have to make up the gap, and then deal with the speed of MJ.

He wanted to set a World Record in the process, but he insisted on running anchor in a 400m where he crossed the line in a WR.

So he needed a “soft” WR from an unusual race distance.  The 4x400m would be impossible.

Can you imagine that team now with a healthy Yohan Blake, Usain Bolt, Warren Weir and Jermaine Gonzales?  What could they run? 1:45?