The Sad State of the 100 meter Sprints

You are here: Home / Coaching / The Sad State of the 100 meter Sprints
14
SHARES
FacebookTwitter

If you are a sprinter, I don’t need to explain the latest news that rocked the Track world, unless you have been living in a cave.

As always, it’s time to move forward, but it makes you think the damage it has done to the aspiring sprinters and athletes out there.  People are already saying stuff like “Tyson Gay killed T&F in America”.

Whoa… nobody killed anyone, thank God, but it does make you wonder at what cost people will do to win.  And the fine line between drugs and supplements. (save that for another story)

For the men’s 100 meters, I took the top 28 performances by athlete, with a 9.88 as the cut off point, and came up with an alarming stat that shows 13 of the 28 now has drug implications to their name.  (yes, I even added Tim Montgomery, Ben Johnson and Dwain Chambers to the list, even though their results have been nullified because they actually ran those times)

Make that 14 if you want to add Maurice Greene to that list (i.e. why do you pay for steroids for your friends?).

Some people even question the marks of the pre-Sydney 2000 results since drug testing wasn’t as extensive back then, and the 8 year statute of limitations is now over.  (For those who cheated back then, and weren’t caught, I can assure you are breathing a sigh of relief… you know who I am talking about)

Why are people questioning the earlier Men’s marks?

For Women events, when you look at the speed, power and strength events (and I’m including the multi events, as well as the 800m) the only WR that was broken since the 1980’s was the 400mH (see my article from 2010 titled Women’s Track and Field – Underpaid and No Respect ).  The PV, HT, TJ and steeplechase are relatively new events which explains the excitement of a chance of breaking a WR.  That’s why women’s pole vault sells.  The Javelin was shortened so that doesn’t count.

So by looking at the chart, the obvious winner is Usain Bolt, which makes Olusoji Fasuba 9.85 (coached by PJ Vazel) the 2nd best last clean sprinter if you believe the results from the 1990’s were tainted but never caught.

It also shows a lot of praise for current active sprinters Richard Thompson and Keston Bledman, who is also coached by Lance Brauman.

And then we have all those 9.88 second guys and above… 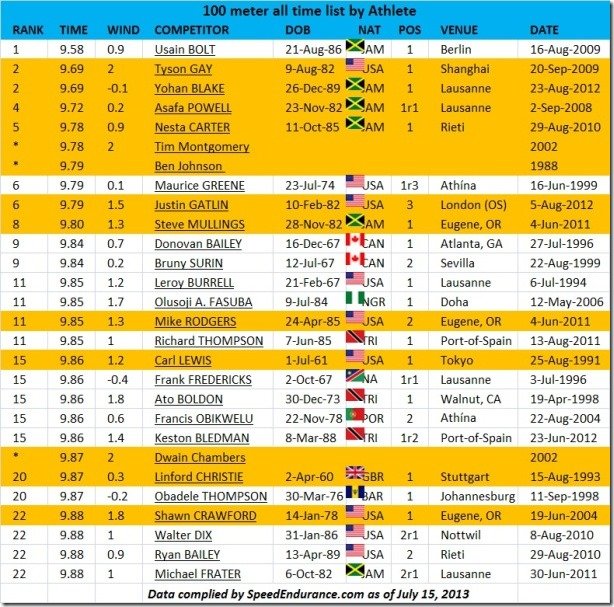