This is his 9th article. Click here for his entire series. 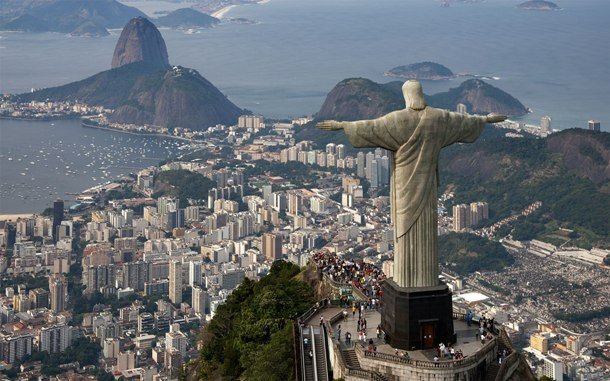 Overlooking the 2016 Olympic city of Rio de Janeiro, on the summit of Mount Corcovado, the largest Art Deco sculpture in the world spreads its arms out to 90 feet. The 130 foot high depiction of Cristo Redentor, Christ the Redeemer, has become the iconic symbol of this energetic and romantic urban center.

Tyson Gay would do well to start praying to Christ the Redeemer.

In what has been a very bad month for the sport of Track and Field, Gay, the second fastest man in history, has tested positive for a banned substance, and he is awaiting confirmation of the results of his “B” sample. In addition, Asafa Powell of Jamaica, the third fastest of all time has apparently tested positive for the banned stimulant, Oxilofrint. The distaff side has not escaped untarnished as the Jamaican sprinters Sherone Simpson and Veronica Campbell-Brown have both tested positive, the latter for a banned diuretic that can be used as a masking agent. In March, the international governing body, the IAAF, said it was investigating 17 possible doping cases uncovered by their biological passport program.

I am not going to rehash my contrarian and controversial views on the topic of banned substances and testing. These latest announcements, and they will not be the last of them, only reinforce my opinion that we should begin the conversation to change the paradigm regarding this tragic issue. Today I read a tweet by Kara Goucher, a marathoner who I respect immensely, urging USADA [US Anti Doping Agency] to work harder because “there are many more cheats out there”. The athletes know. This is a war we are losing and maybe have already lost.

My interest today is to talk about redemption. What is it, how do you achieve it, why are some redeemed and others not? Life has become a three act play where not all are given the chance for their third act. Why has Bill Clinton been forgiven while Richard Nixon was not? One could argue that Clinton’s recklessness was far more serious than Nixon’s penny ante burglary. Both lied and covered up shamelessly. Why can we forgive the style-maven, Martha Stewart, while Pete Rose remains banished from baseball and the Hall of Fame? Why did the voters of South Carolina recently elect former Governor and serial liar, Mark Sanford, to Congress? Why are the voters of New York seriously considering the candidacies of Eliot [I keep my socks on during sex with hookers] Spitzer and Anthony “Candid Camera” Weiner, and both are favored in their races?

Some institutional rubrics exist as an avenue to redemption. The Catholic Church has its confessional; Alcoholics Anonymous has its Fourth Step; celebrities have Oprah. These days there is a rehab for most everything; alcoholism, anger issues, gambling, sexual addiction, drug abuse, narcissism, obesity, etc. Reflexively, those who are looking for forgiveness and redemption seek out these havens to lick their wounds.

See also  What is the Drive Phase in Sprinting? PART 3

I know Tyson Gay and I know him to be a good and decent man. I have no idea how he got himself into this horrible position but I hope he can rise from the shame to compete again. I read where he was dropped by his shoe sponsor, Adidas, mere hours after his transgression was announced. If his punishment is the usual two year suspension, he will be eligible to train and compete in the 2016 Olympics in Sao Paulo. I hope he and his management team develop a plan for him to get there.

It seems that one necessary element for rehabilitation is “to go away for awhile”. It would serve Tyson well if he uses his time wisely and devotes some of it to community service of some form. The public spotlight generally magnifies the quality of the act of contrition. Gay’s initial pronouncements have been honest, candid and devoid of the usual external finger pointing. He should take a cue from the cheerful Clintonian optimistic demeanor and avoid Nixon’s terminal bitterness. Finally, he should take a good, hard look at the people he has surrounded himself with. An intelligent, diligent and ethical support team would not have allowed him to be in this predicament.

Our Judeo/Christian culture accepts that Original Sin is an incident of birth and we are tolerant of human failings and frailties. We are a redemptive society that genuinely approves of pathways to a “return to life” much as the Christ created for Lazarus of Bethany. I suggest we should not be too harsh on our errant brothers and sisters.

See also  Speed Training: How to Time Yourself

But, if they want to compete again in the summer of 2016, it wouldn’t hurt for them to invoke the Cristo Redentor from time to time.