Emotions… how was I going to feel returning to the London Olympic stadium one year later?  The track is the same but with no Olympic flame and some advertising billboards, it actually was well done.   I was afraid the corporate sponsors would plaster the Diamond League meet.  And there isn’t a bad seat in the house.

But I am more impressed with the London crowd, despite the usual UK flag waving patriotism, especially when you consider the meet moving from a 1 day meet at the 22,000 seat Crystal Palace venue to a 3 day meet seating over 60,000 fans!

It’s obvious the stadium was packed due to Usain Bolt, but the stadium did sell out for Day 3 which was all Paralympics.

As much as I love the American’s Nick Symmonds & Duane Solomon, the Men’s 800 meters without David Rudisha was boring, considering last year on this very track.   Good to see Matt Scherer get some paid gigs in Europe this year!  It’s always good to see Rudisha run, even with a Rabbit, because his runs show so much control, so much composure and relaxation, and you never know if a WR will be broken.  Did you expect 1:40 last year?  People want to see world records, plain and simple…

Which leads me to…

The Men’ HJ was exciting with the Russian Bohdan Bondarenko going after the WR at 2.47! (he still won in 2.38, and he barely missed at 2.43)  It’s been a long long time since we’ve seen that height.  Even on Saturday, as soon as the Frenchman Renaud Lavillenie jumped 6.02m, it started to pour rain, but that still didn’t stop him from attempting 6.16 three times!  After his 6.02, he still had the energy to sprint across the apron, hurdle the billboard barrier, and climb into the stands to give his coach a hug (I think that was his coach).  Two vertical jumps, two attempts at the WR.  Great for the fans.  But with the swirling winds, and the rain on the Saturday, I really have to give Renaud a lot of credit for trying and keeping the fans on their feet.  6 meters is a long way up.

See also  Backside Action is the Key to Force Application 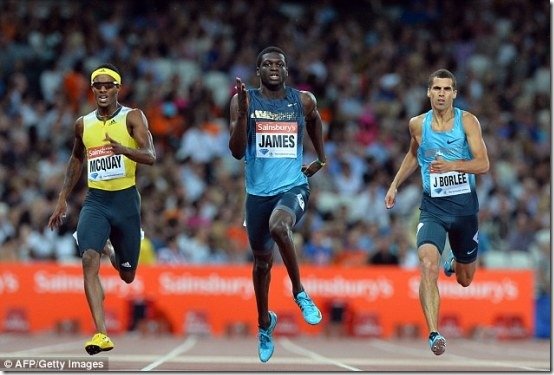 The Men’s 400 was a walk in the park for Kirani James without Lashawn Merritt… it would have been nice to see a 43 point on that fast track. But with Worlds just two weeks away, I can’t blame anyone just going for the win.  And that’s what he did.

Men’s 200 was exciting.. Warren Weir is looking good for Rio 2016 if he gets stronger and injury free… Barring injury, we might seven see a Jamaican sweep again in the Men’s 200 two Olympics in a row, but maybe in a different order?  We’ll know in 3 years.  I know as I write this, Churandy Martina and Wallace Spearmon has steam coming out of their ears!  Don’t count them out!

For the women’s distance events, the meet resembled a North American meet with loads of Americans and Canadians .  And no rabbits, too.  The 6th best Kenyan, Mary Kuria, won the women’s 1500 anyways.

I was disappointed not to see James Dasaolu run, as I think he was able to break Linford Christie’s British record with the right wind conditions and the lighting bolt fast track.  A hip flexor problem was the problem, but let’s see how his body will hold up through 3 rounds on Moscow.  I am sure everyone has that on their mind, especially the British press!

Due to a FUBAR with my accreditation on Saturday, I ended up at the London Anniversary Games late.  By the time I got to the mixed zone, all I saw was Sally Pearson with a big smile walk by.  I had no idea what she ran, or if she won, but based on her smile, I knew she won.  She was probably saying to herself, “I am back”.

We had the Jessica Ennis and Mo Farah show on this “super” Saturday.  I really commend Jessica for attempting all 6 of her long jumps, despite just finishing the 100m hurdles minutes before, and with an bad Achilles to boot!  But the Long Jump show really belonged to Katarina Johnson-Thompson… her landing was awful, and I can just imagine with some better technical work, she will jump 7m on a regular basis!   The competition was “tied” at 6.44 after 4 jumps with Johnson-Thompson and Lorraine Ugen (also from GBR) but then Johnson-Thompson and Bianca Stuart both jumped 6.46 on their 6th and final jump.  The decisive moment came from Stuart’s 2nd best jump was 6.40, so Johnson-Thompson won on the “count back”.  Rule number 1 in the jumps… get a good series of jumps!

With Mo Farah, I swear the race organizers un-stacked the field for an easy win.  My opinion anyways…

Good to see David Oliver with a win, with the unfortunate DNF of Aires Merritt.  I really respect the men’s hurdlers (as well as other athletes) as they don’t “duck each other” for the pay cheque.  Or possible diminishing value on losses.  No matter, all roads lead to Moscow.

It’s really a small world.. well, at least Europe is.  I ended up being on the same early morning flight to Frankfurt the next day with Michael Tinsley, who won the 400mH in 47.98.  He is looking good for Moscow, with Javier Culson as his main competition.

Relays… I feel bad for Adam Gemilli as he was involved in the bad pass in the 2012 Olympic semi-finals, and now as the 2ng leg, not anchor, he was involved in another bad pass.  Since he is a young laddie, I always felt he should run first so that all he has to worry about is only one exchange (and a great start).  I am sure the British press had a field day ostracizing him!

Canada’s squad didn’t do so bad in the 4x100m relay, but they ran better in Monaco one week earlier.  They could easily have run sub 38, just like they did one year ago on the same track but the passes weren’t crisp with the baton speed slowing down slightly.  Coaches, it doesn’t matter how fast your two fastest runner’s season bests are… if your baton speed crawls in the relay zone.

But at the end, the fans of Day 2 really came to see Usain Bolt win the relay, and close out the show, just like he did one year ago on the same track.  Emotional?  A bit…

With next year being a non-major year (at least for the Americans; Canadians, Jamaican’s and UK still have Commonwealth Games in Glasgow to look forward to) I wonder how the turnout will be?  Will the awe and honeymoon still be there?  Will they exempt Usain Bolt from UK tax to allow him to run again?