At the London Sainsbury’s Anniversary Games last Sunday, Alan Oliveira ran a 10.57 100m WR on the fast London MondoTrack.  (I missed this race as I was at the airport, coincidently on the same flight to Frankfurt with Michael Tinsley).

Take a look at the video below, and note how he uses a 40 yard dash style crouch start!

But the start sets you up for the entire race…

Before we begin the discussion, let’s talk about Golf

In golf, there are several ways to hit a longer shot:

(yes, I am oversimplifying this, but I’ll get to the point)

Of course, the remaining component is accuracy!

Once you figured out the sweetspot of the golf club (or any club for that matter), I am sure you were hitting the ball further.  But it was a learned skill. 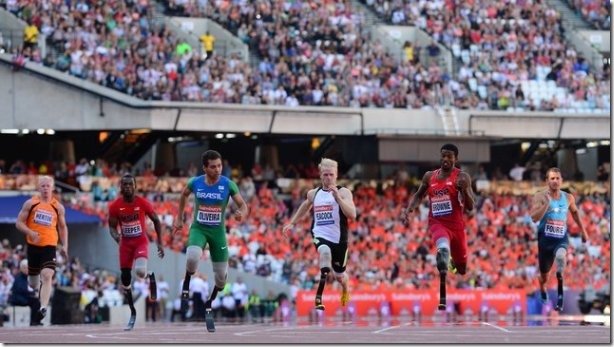 Back to Alan Oliveira

10.57 and 20.66 is nothing to be alarmed for elite athletes, but it is getting close to the Olympic and IAAF A/B standards.  And Alan Oliveira is from Brazil, and Brazil is hosting the 2016 Olympic and Paralympics!  Do you see a connection here?

But when a paralympian takes a spot in the finals over an able bodied athlete, then you will hear the complaining.

So, going back to sprinting, there are 4 ways to get faster:

Why is Alan Oliveira so fast?

A lot of people complain about his unfair stride length due to his unfair blade length, because the maximum allowable length is based on anthropometric estimates.

In fact, Oliveira is allowed to race at 185.4cm, but chooses blades to become 181cm.  Like the Big Bertha club theory, longer is not necessarily better.  Having a longer club (or lever) does not mean you can run faster to hit longer shots in golf.  Try using a Big Bertha, or even a 3 iron (2 iron?)?  My 3 iron sucks, but my 7 iron is deadly accurate within 130 yards, good enough to play the Senior Tour in Golf.  (Okay, I am just kidding about the Senior Tour, but one can dream, right?)

But he wins based on 3 things:

Again, I hate to say this, but he is only going to get better in the next 3 years.  And the way he is running, he WILL run in BOTH Olympic and Paralympics on his home turf.  Brazil will “demand” that request, and it won’t get denied.

The best way to prove my speed endurance theory (along with his long acceleration time to reach MaxV) is to take 10m splits, which has proven why Bolt is superior regardless of stride length (longer accelerations to MaxV, higher top end speed @ 0.81 sec/10m, and better speed endurance which makes him appear he is still speeding up when everyone is actually slowing down)

I don’t have any high speed video of Alan’s races, so if the IPC or IAAF want to contribute to this project, I am open to it.

Until then, I will focus on my own training, my own athletes and 100m-400m sprinters around the world.