This is his 11th article. Click here for his entire series.

A Ball and Two Gloves

In my professional travels, despite numerous opportunities, I have refrained from becoming an obsessive collector of sports memorabilia. I do possess a few nuggets: autographed Joe DiMaggio, Willie Mays, Joe Torre and Tom Seaver baseballs, one of my business cards with a nice sentiment signed by Diego Maradona, signed photographs of me with Bill Clinton, Pele and Henry Kissinger, a Super Bowl program signed by Wayne Gretzky, a Puma shoe signed by Usain Bolt after he set the 100m record, a concert program signed by all the Rolling Stones. I think I have a unique group of signatures by sports Commissioners; a basketball by David Stern, a football by Paul Tagliabue, a puck by Gary Bettman and a baseball by Bud Selig. All of these items remind me of my personal connection with the signatory and I do not ascribe monetary value to them.

Memorabilia has become a big business. There are auctions and markets for a plethora of items whose value, like many other assets, is frequently driven by scarcity. There are two items that rank high in the pantheon of sports and social memory that have gone completely missing. If they were to be recovered and their provenance validated, their monetary value would be almost priceless. 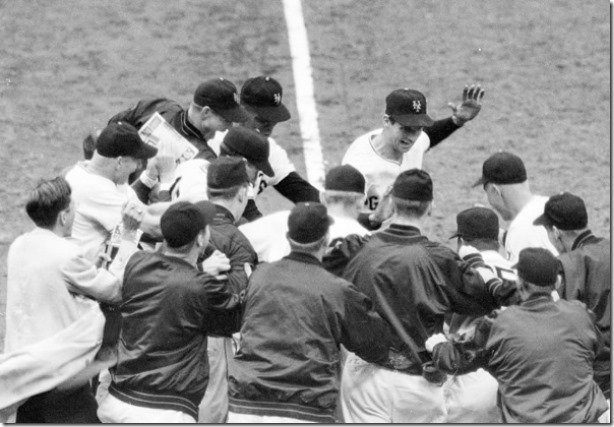 On October 3, 1951, at 3:58 pm, Bobby Thompson, the angular left fielder of the New York Giants, hit the “Shot Heard Round the World”, a home run into Section 35 of the Polo Grounds. There were two outs in the bottom of the 9th inning during the deciding game of the playoffs with the Brooklyn Dodgers. The three run homer resulted in a 5-4 victory for the Giants, and a slot in the World Series against the Yankees. It is probably the most hyped hit in the history of baseball.

I had skin in the game. I was a Giant fan in a household of Dodger fanatics. My idol, Willie Mays, was in the on-deck circle when Thompson produced this miracle. I had been allowed to skip school on this day and watched the game on our barely-visible TV, sitting in a red leather chair. I can remember the feeling of exultation as I whooped around our modest home in Montclair, NJ. I can’t remember if I was fed dinner that night.

The bat used by Thompson is on display at the Hall-of-Fame in Cooperstown, NY. The uniform worn by Thompson is reportedly in the collection of Dan Scheinman, a part owner of the San Francisco Giants. And, the ball is missing! It disappeared somewhere in the melee of arms and hands reaching for it that day after ricocheting off a pillar. The ball has been romanticized by the great author, Don DeLillo, in the Prologue of his opus, Underworld. It has been the subject of many a scientific search, including a 2 ½ year quest by Brian Biegel. It still remains missing despite a million dollar reward placed on its recovery. 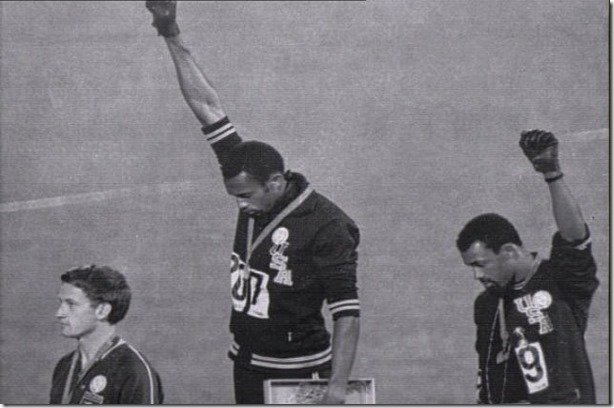 The disappearance of two gloves is also a fascinating story. On October 16, 1968, in Mexico City, two athletes made a symbolic gesture that rocked the world. Tommie Smith had just won the Olympic 200m dash in world record 19.83 sec. time and his training partner, John Carlos had finished third. They went to the podium shoeless, in black socks, to show solidarity with the poor. Tommie raised his right fist in a black glove as a sign of black power. John did the same with his left fist. [They had to share Tommie’s pair because John had forgotten his gloves in the athlete’s village]. The photographs of their protest were wired around the world.

The two were banished from the Olympic Village and felt fear for their lives. They holed up in a cheap Mexican motel, where members of Cuba’s track team acted as bodyguards. Once they returned to California, they were hounded by their opponents and blacklisted. John suffered terribly and had to endure the suicide of his wife. Tommie played football for awhile for the NFL Bengals and ultimately wound up teaching at Oberlin College, the alma mater of my son Philip.

In 2008, a series of events took place to honor Tommie and John for their courage on the 40th anniversary of this iconic event. After one of these events, I had the opportunity to share a leisurely lunch with Tommie and his lovely wife, Delois Jordan Smith. I could not resist the temptation to ask the question.

“So, Tommie,” I asked “where are the gloves?” He then told me the following story:

When he was leaving the US for the Games, he parked his car at the airport and grabbed a pair of black fabric gloves off the dashboard. They were the gloves he generally used on weekends to help pick cotton on his father’s farm. He thought he might work the gloves into a statement he wanted to make on the podium if he won. When he finally got back to this country he took the gloves and shoved them into the glove compartment.

Six months later his nephew was accepted to college and needed a car. Tommie gave his old car to him with the gloves, as far as he knew, still in the glove box. He never saw or heard about them again.

A ball and two gloves still missing. And, I have to be honest, I feel kind of glad. To those of us who treasure the nostalgia of their existence, the memories are enough. They have escaped the crass commercialism of our contemporary society.