As we approach the IAAF 14th  World Athletics Championships in Moscow, be sure to download or view their bi-annual statistics book as a trendy magazine style tabloid, or you can download the entire PDF here. (32MB file)

What was interesting was the section on performance trends.

As far as the sport as a whole goes, I usually “ignore” the winning time as it could be a freak win, or unusual weather conditions, but what is important is the other athletes in the field and how they rank.  This is how they base qualifying standards for the next championships. 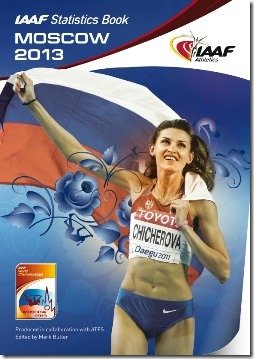 For example, what was the slowest time in the Final, assuming they don’t pull a Derek Redmond in 1992?  (Did they DQ him because he had assistance from his father?  Did they DQ him for running out of his lane?)

What was the fastest time in a semi-final WITHOUT making the finals?

Or fastest time in quarter-finals WITHOUT making the semi-finals?

This is valuable information for all coaches as you may have a top 32 ranked athlete (or top 100), and wonder how far he or she will go at the Championships.  Of course, many countries will not send athletes unless they can guarantee a top 16 or top 8 finish.

I don’t know why they bother tracking the 8th place finisher for 100m and 110mH since we get a lot of DNFs.

See also  Justin Gatlin and VertiMax: Does it Work?

Let’s look at some sample times.

In 2009, 10.04 is the fastest loser in the semi-final that didn’t advance to the finals!  And you wonder why the semi-finals are more nerve racking to watch, at least for the coaches!

The message?  For most of you in the early rounds, it’s go hard or go home.