We are only one-third into the IAAF World Championships in Moscow, and as I watch the races, I see so many great performances and a few “a-ha moments” where some fresh reminders to coaches and athletes could be reiterated!

I am not taking anything away from these athletes.. the pressure is immense, and the stakes are high.

In the Heats, Run Through the Line

In the qualifying round of the Men’s 100m, we saw James Dasaolu slow down and literally stop before the line, thinking he guaranteed the 3rd qualifying spot based on placing.  Luckily for him, he made it on the 3 fastest losers with his 10.20.

The Lesson?  Make absolutely 100% sure you qualify for the next round based on placing.  Running a good time also gives you a preferential lane in the next round (Lanes 3-4-5-6) so that’s a good reason t go hard or go home.

The quality of the men’s 100m is so deep these days, you need to be able to run sub 10.00 in the semis just to make the Finals 2 hours later.  You cannot have any weak stages in your race, or else you are going home.

When you consider the 4 fastest losers in the men’s 100 meters, and only 2 advance based on time:

With a 9 lane track, they could have put Zhang of China in the race, but rules are rules.  Still, it’s a NR for China, but note neither China nor Japan has not broken the 10.00 barrier yet.  Just give it time.

In Finals, Always Lean or Dip at the Finish

You should be practicing the last 10 meters of your race where you push, push, push and dip for the line.  3 hard strides then lean.  I wish I could coach Amantle Montshou and teach her this. (Actually, I got this tip from Lee Evans, so give credit where credit is due) 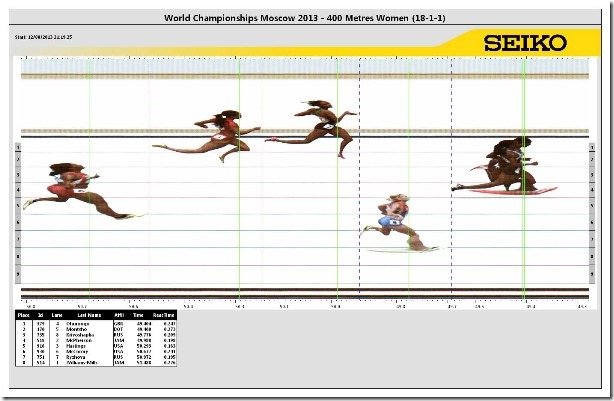 I give a lot of credit to Hitomi Niiya (women’s 10K) and Valeria Straneo (women’s Marathon) for taking out the pace for an honest effort.  We see too many races where they jog for 24 laps and make it a one lap sprint.

I am surprised we didn’t see the Men’s 10K with more surges and trying to “take the sting out of the legs” by running a hard 24 laps then “we’ll see what’s left in the tank” for that final lap.  By running the race conservatively, you leave the race to the great kickers (or sprinters) and therefore you give Mo Farah a chance to win Gold.  And he did.

In the Jumps and Throws, Always have a Good Series

If you think your second best jump or throw isn’t important, look at the women’s long jump.

Brittney Reese made the last of the 12 qualifying spots  tied for 12th & 13th, but she had a better second-best jump.  Then she went on to win the Finals!  How close was that?

In the Finals, 3rd and 4th was tied at 6.82m (Ivana Spanovic of Serbia & Volha Sudarava of Belarus) so that reverted to a “countback”.