Runners in 400m and 800m races are often urged to attempt to run the second half of the race at the same pace as the ?rst (even splits) on the grounds that this is the most economical distribution of energy, as no doubt it is.

However, almost no successful runners in 400m and 800m races actually do this, and the burden of this research paper mentioned below has been to try to understand why.  A simple model of entropy accumulation suggests that for any reasonable relation between entropy generation and speed, the optimal race strategy is to run the ?rst half of the race faster than the second.

Jimson’s Note: The last even-split 800m to win was probably Dave Wottle from the 1972 Olympics!  You can read more about 800m splits and differentials in this past article. 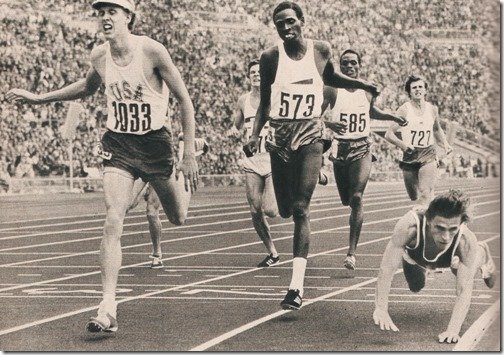 Such a strategy causes the entropy density gradient across the boundary of the working muscle to take on a large value early in the race, which increases the entropy ef?ux.

That this is in fact the optimal race strategy is proven by the overwhelming preponderance of positive-split races in the set of world records for one-lap and two-lap races.

While there are many other factors that athletes encounter in races, such as the race tactics of other athletes, as well as psychological variables, taking into account entropy arguments suggests that even-split pacing is not optimal, even in principle, for 400m and 800m races.