This is his 16th article. Click here for his entire series. 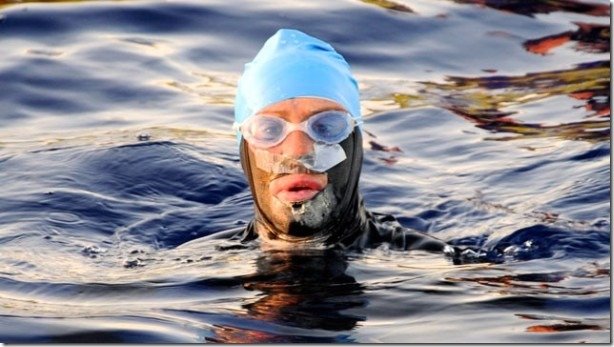 Twenty years later, we heard it again. “Don’t ever give up!” In his iconic 1993 speech at the ESPY Awards, a dying dynamo by the name of Jim Valvano galvanized the audience with his optimistic words of defiance. Last Sunday the same cry came from the swollen lips of the indomitable Diana Nyad as she staggered up the beach in Key West, Florida.

At age 64, this alumna of Lake Forest College in Illinois has reached the apex of her career. “You’re never too old to live your dreams”, she told an interviewer from CBS. Thirty-five years ago she established a personal goal of being the first person to swim the Florida Straits without a protective shark cage. A distance of 110 miles, this treacherous body of water is full of toxic jelly-fish, predatory sharks and is subject to quick-forming storms. I have crossed it dozens of times by plane and on three occasions by overnight car-ferry. It is anything but placid.

She made her first attempt in 1978 at the age of 28. That and three other attempts ended in failure. As she stated, she knew that “none of it was going to be pleasant”. This past week, however, the stars were aligned with her persistence and after 53 hours in the water she succeeded. What a testimonial for human will and perseverance! I believe she joins a pantheon occupied by Sir Edmund Hillary, Dr. Roger Bannister, Neal Armstrong, Amelia Earhart and only a few others. And, what a great example she sets for those of us who are in the “autumn” of our lives.

Nyad was very firm in her statements about her age. “Life is not over at this age by any means”, she said. “You can dream; you can be vital; you can be in your prime”.

What is ironic is that Nyad, in following the familiar rafting route of Cuban balseros, arrived from the south, while most of those who arrive in Florida come from up north.

The decision to finally sell holdings up north and make the trek down I-95 or I-75 used to symbolize the chance to live the “good life” during the “golden years”. Societal changes during the past 30 years have made this Hajj a very different experience. Elongated life expectancies have made what was once a decade long voyage “into the good night” an ordeal of many years. The breaking of the social/economic compact between employers and employees means no more pensions to lean on. Recessions have taken their toll on privately held and controlled 401K accounts. Very few arrive happy and secure.

Observing new arrivals to the Sunshine State is an interesting experience. Women seem to fare much better than men. They immediately start painting their toenails the same shade as their granddaughters, buy a slew of age-inappropriate frocks at Chico’s, and make their first visit to the plastic surgeon. Men arrive in a confused state because they can’t tell anyone what they do. They throw away all vestiges of a civilized wardrobe, buy some cargo shorts and Topsiders, and start gaining weight.

Nobody dreams, very few are vital, and nobody thinks they are in their prime.

I was a reader and a fan of John Updike and read his four novels and one novella depicting the life of Harry “Rabbit” Angstrom. The final book, Rabbit at Rest, described the end of Harry’s life. He and his wife move to Florida where Harry becomes bored, depressed and overweight. Harry ultimately dies of a heart attack that hits him playing one-on-one basketball, his favorite game in his youth.

My good friend, George, decided about 20 years ago to beat the rush and buy a condo in Florida. He and his wife settled in the Boca Raton area [I am sure not far from the fictional Del Boca Vista, home to Morty and Helen Seinfeld]. He spent the winter months there for a few years, went half crazy looking for something to do, saw he had nothing in common with the deflated, detumescent souls around him, and high-tailed it back to Long Island. I accused him of suffering from premature evacuation. He loves the town he lives in, the proximity to NYC, the people in his neighborhood and the feeling that he is a part of civilization rather than a spectator. He has throttled back on his work but is still vital and alive.

Diana Nyad has taught us a great lesson. She arrived in glory to the beaches of Florida with a message of optimism and hope. She has shown that those of us of a certain age can still achieve, be productive, overcome obstacles and shine. Her grotesquely swollen face as she waded ashore was a thing of beauty. I don’t think she is looking in the Yellow Pages today for a clinic to have a little work done on it.