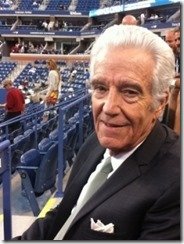 This is his 17th article. Click here for his entire series.

Barack Obama is in trouble because he never had a little brother.

When we were growing up my late brother, Bobby, and I shared a bedroom in the attic of our home in Montclair, NJ. I was older [by 15 months], bigger, and decidedly more bossy. He was smaller, mouthier, and very sneaky. We spent our entire pre-adolescent years in a state of armed belligerence. There was nothing we did not fight over. In this atmosphere of hostilities, however, he always held the trump card. He was my mother’s favorite, and he knew it.

Several times during this war I drew a line at the mid-point of the bedroom and told him there would be dire consequences if he ever crossed it. Of course this stimulated devious plots to trespass upon my self-declared realm. On some occasions he would say he had crossed the line when he had not. On others, he would dart across and then retreat. When I went to retaliate he would holler out to his maternal protector that he was being bullied. I learned the hard way that you don’t draw lines and advertise them. If you are going to use power, take action and explain afterwards. After wising up, I never drew a line again.

The minute I heard Obama use the term “red line” when discussing chemical warfare in Syria I knew he had boxed himself in. I immediately thought of the New Jersey attic bedroom. Sure enough, the sneaky Bashar al-Assad has periodically used his supply of Sarin gas to test the will of the Great Satan. And, this British trained dentist apparently knows more about the current American war fatigue than our president. A clear majority of Americans oppose any intervention in Syria. We were sold a WMD bill of goods by George W Bush, Colin Powell and the NeoCons in Iraq, and the credibility of our spooks is at an all-time low..Additionally, no one believes that our actions would be limited. Military adventurism is like eating potato chips; you can’t have just one.

The sectarian quagmire that is the Middle East is full of other conundrums. Benjamin Netanyahu, the Israeli Prime Minister, has drawn a line of his own with Iran. He came to New York last year flaunting a puerile chart at the UN showing the Persian advance towards becoming a nuclear power. He drew a squiggled red line on the chart showing “the point of no return” and made bellicose threats of retaliation. To date, his planes sit on the runway and the mullahs, I am sure, are tittering in their robes.

In Korea, Dennis Rodman’s BFF, Kim Sung-Un, thumbs his nose at our insistence on a nuclear-free Korean Peninsula. As negotiations commence and then repeatedly break down, his mad scientists, with Pakistani assistance, move forward constructing additional bombs and enlarging fissile stockpiles.

There is a global reality that we need to face. There are a lot of crazed people out there who lead countries and movements that have some very ugly weapons. And, as in the case of Assad, they are disposed to use them if it is in their enlightened self-interest to do so. For us to threaten military sanctions for mere possession of these newer technologies of warfare is folly and sure to lead to loss of face and confidence. We should orient our strategies to containment and deterrence.

As a combat veteran, I am frequently amused at civilian mores regarding permissible and impermissible modalities of warfare. The most horrible casualties I have ever witnessed were injuries by fire. The excruciating cry of pain by burn victims is seared in my memory. Yet we find no moral problem in dropping fire bombs on cities like Dresden, in using napalm or flamethrowers, and in firing salvos of white phosphorous shells, all permitted by the “laws of warfare”. It is not for nothing that architects of religion designed hell to be a conflagration by fire rather than other punishments. I don’t think that Hades reeks of Sarin gas.

To a soldier, war is war. All horrific and life-changing. Civilians normally start drawing lines when they sense that weapons may ultimately be used on them. And, they are the very ones who send their armies of young men and women to do their dangerous work for them. We have spent a generation waging cost-free wars. The all-volunteer army meant that only a small percentage of families felt the fear and pain of having a loved one in harm’s way. George W Bush, with the help of a Democratic Congress, went to war “off-the-books”, so to speak. He engaged in two wars, Iraq and Afghanistan, without raising the taxes to pay the two trillion dollar cost. And, by the use of drones and airstrikes, we have reached a point where killing is antiseptic and resembles a video game.

Maybe it’s a good thing that we now know that the other guys have nukes and gas and other vile means to get to our civilian populations. Maybe it will get us to think twice before we draw lines and threaten people.

Think of how differently the headlines would read if Obama had a little brother.