.   You can read my review in Introduction to the Physics of Sports.  He also wrote Windy Records in Track & Field and The Effect of Wind on Curve Running.

Did you ever wonder what happens of you do the Standing Long Jump, and the sand pit is below the level of the take-off board?

How much distance do you gain?

The Standing Long Jump and Some Basic Physics

It used to be a popular Olympic event until 1912. In the standing long jump the athlete must start from a static position and by hauling himself/herself forward attain maximum horizontal displacement. Nowadays it is mainly used to asses leg power. Like in other events, such as the conventional long jump, the high jump, the pole vault, etc., an athlete performing the standing long jump, for most of his/her attempt, essentially becomes a human projectile.

The physical laws governing projectiles are well understood and are studied as part of any course in fundamental physics. We can use these laws to obtain a better understanding of the athletes’ performance.

A fundamental question that must be addressed is the following: Assuming that the projectile starts off with a speed (V), what should the initial inclination be, in order to maximise the horizontal distance covered? To answer this, we must carefully consider what is happening during the motion of the body.

The strict proof requires knowledge of advanced mathematics but we can also use common sense to reach the right conclusion. The range is dependent on two factors: on how fast the projectile is travelling horizontally and on how long it can stay in the air. The former requires a large horizontal speed, and the latter, a large vertical one. For a fixed total speed V, we must make a compromise, since increasing one of the two, implies a decrease in the other. The best combination we can have is to make both speed components equal. Basic mathematics and common sense tell us that this will happen at an inclination of 45 degrees.

So for an ideal projectile the optimum takeoff angle is 45 degrees. Most of you probably still remember this from your school years. Why is it then that athletes performing the standing long jump choose angles that are significantly smaller?

Analysis has shown that in most cases launch angles of between 30-40 degrees are chosen. There are a few reasons that a standing long jump athlete does not behave like an ideal projectile. I will concentrate on the one that probably has the greatest influence. In the above analysis we assumed that the launch speed V is fixed. In fact, it depends greatly on the launch angle itself. For larger angles the athlete is having to use more of the push force against his/her weight and thus the speed attained will be smaller. So lower takeoff angles produce greater speeds and this will shift the value of optimum takeoff angles towards the lower end and thus under the “theoretical” 45 degrees.

As a final thought, let us imagine what would happen if the sand pit in which the athlete lands was placed at a lower vertical level than the takeoff board. How much horizontal distance would the athlete gain by this?

As the athlete drops further, he/she will also move forward. The relationship between the horizontal and vertical distances depends on the angle of the velocity relative to the horizontal. Simple projectile analysis can prove that for takeoff angles of between 30-40 degrees, the approach angle, if the sand is below the takeoff board by about 10-20cm, will be near the 45 degree mark. For this angle, the horizontal and vertical distances covered will be the same. So as a very rough approximation we can say that if the sand is 20cm below the takeoff board the horizontal distance gained will also be about 20cm. I emphasise that this is a very rough approximation and will certainly not hold for large differences in height.

To be honest, for accurate results to be achieved, a full analysis would be required that is beyond the scope of this article. For a detailed presentation of various sports projectiles one can refer to Chapter 5 of my book, “An Introduction to the Physics of Sports

”. Sports and physics combine in a wonderful way! 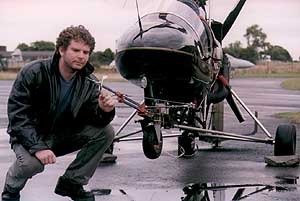