This is his 26th article. Click here for his entire series.

What’s in a name?

Usain Bolt runs like one. Red Adair was so daring fighting oilfield fires that they made a movie [“Hellfighters”, 1968] about him starring John Wayne. Bernie Madoff made-off with his clients’ money. Anthony Weiner sexted his to women from his phone.

And now we have Richie Incognito. As it turns out, Richie is incognito no more.

Richie is smack in the middle of the controversy over conduct by players competing for the NFL’s Miami Dolphins. This offensive, Offensive Lineman purportedly harassed, bullied and hazed his teammate, Jonathon Martin, causing Martin to seek emotional counseling and ultimately abandon his team and return to his home in California. A deplorable voice message left for Martin by Incognito is rife with racist rants and apparent threats of physical violence. The Dolphins have suspended Incognito and the NFL has appointed an outside investigator to garner the facts. Last weekend Incognito gave an interview to Fox Sports where he apologized for some of his language, admitting it was inappropriate, but averred he had records showing Martin used similar rhetoric. He also stated that his treatment of Martin was encouraged by Dolphins’ coaches in an effort to “toughen up” the Stanford grad. 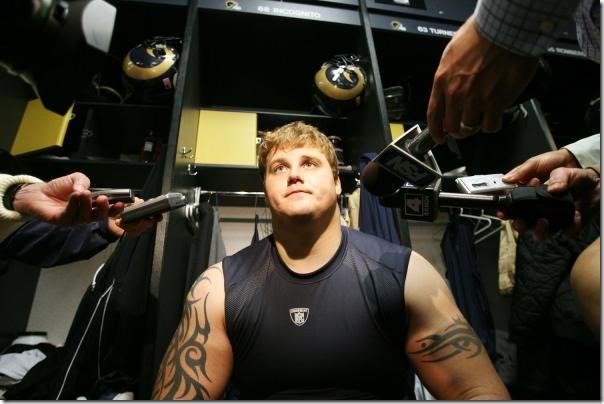 This story has legs. It is full of violence, celebrity, race [Incognito is white, Martin is bi-racial], sex [supposedly Incognito convened meetings with his fellow linemen in a strip club], class, technology [cell phones, texting] and huge sums of money. The NFL brand is threatened, the reputation of a storied franchise is questioned, and two well-compensated athletes have their careers in limbo. Athletes, commentators, pundits and even editorial pages are weighing in with opinions and taking sides.

At the heart of this controversy is the culture of the football locker-room. This window into the dynamics of this male haven has exposed some of the rubrics and protocols of this barbaric sport. Many seem dismayed at the revelations although they should come as no surprise. When we put 22 armor clad gladiators on a field of battle and the principal objective is to inflict pain on an opponent, we should accept that the preparations antecedent to this mayhem are equally barbaric and uncivilized. I suggest that there are several other similar situations where behavior of this type is promulgated. Besides football locker-rooms, military barracks and construction sites are places where codes of harassment and insulting language are the order of the day. I have been a denizen of all three; I have been the subject of harassment; I have been a harasser. And, in my experience, there is value to these practices.

All three “professions” contend with the presence of extreme physical danger. In all cases, participants need to have the assurances that comrades are prepared to share the risk of injury to achieve an objective and that they come to their assistance while “under fire”. The requirements of trust are paramount. The harassment rituals are merely “tests”; dry runs, so to speak. They are attempts to model behavior that when the time for “fight-or-flight” comes, there will be a conditioned response to fight. Without thinking about it. Newcomers, trainees and rookies are put to distasteful tests to see how they react to the stress of danger. I can tell you it works. This is a selection process that, while inelegant and coarse, weeds out the unreliable and weak.

I know many find the language and rhetoric deplorable. It is pretty indefensible. However, it is “ritual” language rather than literal. No topic is sacred. Those who spit out those offensive terms and names do so for emphasis and as a general display of aggression rather than what the words actually say. Contemporary music lyrics that are misogynist or racist or violent serve the same purpose and in many cases are far more disgusting.

Some will say that football is a sport of skill and that it has civilized rules. Bull! My high school football coach, Bob Mason, was a devout Daily Mass attendee. There was a phrase he used at every practice and at every team meeting and at every game. “Make it hurt!” When we were running wind-sprints he wanted us to extend ourselves until we hurt. And, when we were blocking and tackling, he wanted us to make our adversary hurt. There was no doubt in our minds what the objective of the sport was.

For as long as we maintain standing armies that are trained to kill or hurt others we will need to tolerate the time-proven rituals of combatants. While we extol the bravery of Seal Team 6 in their mission to assassinate Osama Bin-Laden, we should be ready to accept their ruthless training methods, including the near-drowning of potential recruits. For as long as we build sky-scrapers and bridges and tunnels we should know that the mostly-men who construct them harass apprentices unmercifully and speak coarsely and in a politically incorrect manner. And, for as long as 20 million of us park ourselves in front of a television set on Sunday to watch modern day gladiators attempt to maim each other, we should understand that these boorish behemoths have spent the preceding week conducting themselves in a manner inconsistent with contemporary work-place laws.

Last week I was asked the following thoughtful question: “Would you go to into combat with someone who had not gone through the hazing and harassment you went through?” After a short pause my firm answer was “No”.