This is his 29th article. Click here for his entire series. 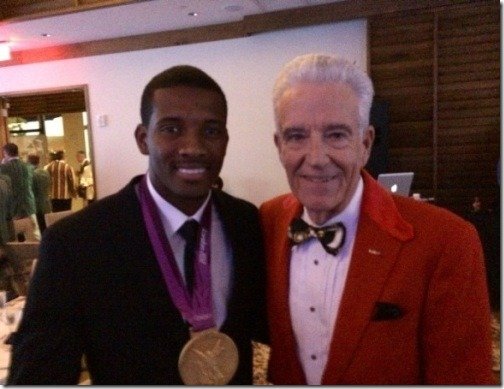 Demetrius and the Gladiators

This week I was invited to the 20th Annual Gala Dinner hosted by the Sarasota International Cricket Club. Once there, I found myself seated next to Demetrius Pinder, the talented and charming young 400m Olympian from the Bahamas, and his lovely fiancée, Bianca.

We had a delightful evening talking about track and life. For those who cannot remember, Pinder ran the second leg on the gold medal winning Bahamian 4×400 team in London. And, after going out in blazing speed in lane 8 [shades of Sanya Ross-Richardson in Beijing], ran out of gas in the individual final and finished seventh. He had his gold medal with him, probably a reaction to what happened last September 11th [ironic?] when his medal was stolen from his truck and later recovered by Bradenton, FL police officers.

At 24, Pinder is approaching his peak years. He has been the beneficiary of outstanding coaching, first in the hands of the brilliant Pat Henry at Texas A&M, and now under the tutelage of that maestro of speed, Loren Seagrave, at IMG Academy. Pinder has a personal best of 44.77 outdoors and 45.33 indoor on the boards. He is focusing his training for the indoor season and hopes to be heard from at the World Indoor Championships on March 7-9, 2014, in Sopot, Poland.

Our discussion dealt not with the physical aspects of competition, but rather with the mental component. I am convinced that the mind and the ability to will victory is the decisive margin that differentiates the mediocre from the elite. As in other aspects of life, I believe athletic competitors go through three zones of willing their bodies to peak performance. The first zone is what I call the “I hope I can” phase. Most athletes, who have trained well, have natural talent and good coaching, readily enter this plateau.

A select few then go on to the “I think I can” level. They have developed the confidence to believe they can succeed and do not shy from it. They embrace the fray; are able to push through pain; are able to focus their faculties, and explore their limits.

Finally, there is the very few each generation who reach the pinnacle of competition. Those are the elite who say “I know I can”. It is a state they achieve that is well beyond confidence. They become convinced that they own the final score, the podium, the tape, the cup. And, there is a special look they get in their eye. I saw it multiple times in Michael Jordan when he demanded the ball with the game on the line. I saw that look, close up, in Atlanta, when I witnessed Michael Johnson run a 43.49. I saw that look this year in the eye of David “Big Papi” Ortiz as he annihilated Cardinal pitching in the World Series. Carl Lewis, Tiger Woods, Larry Bird, Joan Benoit, Mariano Rivera, Wayne Gretzky, Martina Navratilova, Peyton Manning; all have had that look in their eye in their prime.

I suggest, under effective coaching and motivation, whole teams can enter this zone. I saw it last season in the NBA’s Miami Heat when they were on a 27 game winning streak. I have seen it in the eye of the Brasilian National Soccer Team. The New York Yankees, the Boston Celtics, the John Wooden UCLA teams and the New York Islanders have gone through periods when they knew they were going to win. I enjoyed watching an underdog NCAA football team this weekend, the Auburn Tigers, become convinced they were going to win against the top rated Alabama Crimson Tide. Their improbable last second victory, secured by Chris Davis Jr’s 109 yard return of a missed field goal, was their sixth win this season coming from behind. Their fine coach, Gus Malzahn, who as recently as 2005 was coaching at Springdale HS in Arkansas, has them convinced they will win if they can keep the score close.

Demetrius Pinder shared with me the story of his final in London. He candidly spoke of his exultation as he went to the front and honestly described the horrible emotions as he realized he was going to be caught by the field. We talked about the discipline he is learning and the training he is going to have to do north of his neck.

In the 1950’s there was an epic film, Demetrius and the Gladiators, which starred the hammy Victor Mature. It was a sequel to The Robe, and depicted epic battles in the Coliseum between Mature’s character and hordes of seasoned gladiators. The charming Bahamian Demetrius, like the protagonist in the film, is about to enter the arena against a bunch of tough competitors. There is his former training partner and World Champion, LaShawn Merritt, who ran a 43.74 in Moscow. Other gladiators he should expect to see include Luguelin Santos, Kirani James, Tony McQuay, Jonathon Borlee and Yousef Ahmed Masrahi. Jeremy Wariner, past World and Olympic Champion and 2013 US Indoor Champion is reportedly training again

Even Usain Bolt, the reigning king at 100m and 200m, might take up Michael Johnson’s offer to train him in the 400m. This year he ran a playful heat at the Camperdown Classic in 46.74.

Young Demetrius better get his “A game” ready. Speed, endurance and a head that convinces him he can win. I’ll be rooting for him.