What is the Drive Phase in Sprinting? PART 2

You are here: Home / 400 meters / What is the Drive Phase in Sprinting? PART 2
170
SHARES
FacebookTwitter

To read Adarian’s past articles, click here as well as my Freelap Friday Five with him.

Make sure you read Part 1 in What is the Drive Phase in Sprinting? before reading this article.

What is the Drive Phase in Sprinting?  PART 2

In this Part 2, I discuss How to work on shin angles.

If you want to develop a more effective push then you have to work on getting better which means lower shin angles and going from one angle to the next faster. This will increase the duration of your push without increasing your ground contact time. It is all about the quality of the push.

The most important angle is the shin push angle. This is when the body is in the best position to push effectively. As seen above the weight is on the toes, the knee has stopped traveling downward, the hip is over the knee. The rear leg knee is either side by side or slightly to the rear of the push leg and the one arm is hanging down. This is a balance and stable position to push from. The push involves maximum glute activation for the longest possible duration which drive the hips horizontally down the track.

Why it is critical to develop this phase? It will have the biggest influence on your sprint mechanics and top end speed.

This is where your top end speed is truly developed. You have some athletes that run great 60m but not so great 100m. You also have those athletes that get out fast in a race because they are getting early acceleration from leg speed or turnover which is not sustainable for 100m and does not create very good impulse. You often see these athlete get passed in the latter part of the race as you see their leg speed slows down. That athlete fits the model of you can’t accelerate past so many meters theory.

So how do we work on this push during the this drive or initial acceleration phase of sprinting?

The issue is getting into optimal body position to push effectively. 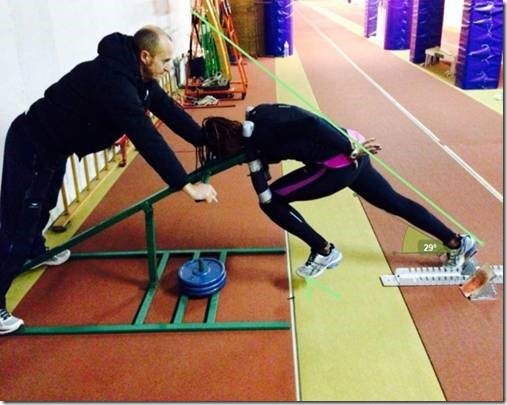 To create high Impulse, some people use sleds and get the low shin angles such as illustrated. This photo demonstrate the low shin angles at full extension. The one where we draw the line from heel to to head and go cool and then determine that is pushing.

[1] the glutes are not activated, which is highly critical for driving the hips horizontally.

[2], the drive leg’s foot is still on the pad, at this point and time you shroud be on your toes and the tip of it as it leaves the foot pad. As shown below [3] The stride length will be short as the front leg is ready to touch down again as a result of the athlete falling. Not only will the first step by short but it will also set a poor push on the second step. Which creates a more stepping out the blocks action especially for low skill sprinters. Even if he punches the ground with the lead foot it won’t be very effective because of the short distance the foot will travel you wouldn’t be able to create a strong punch to the ground. A strong punch also doesn’t create an effective push. You really want to wait until you contact the ground again to really push and maintain high impulses. Some coaches want that foot to land behind the hips and center of mass. But your center of mass would be moving forward. As shown below… if your foot lands behind your CMS you would create stumbling effect. So if you have an athlete that appears to stumble or stall out on the 1st  or 3rd step the foot did not land in the optimal position to maintain high impulse.

Others use bullet belts, pulling sleds, pushing walls and many other drills and equipment and exercises to develop this phase of the race. The reason I am not a fan of those methods as it doesn’t allow for the system to work in the sequence needed for an effective push. Such as the movement from one shin angle. (The set shin shin angle). Which allows you to reach the balance and stable body position to have maximum glute activation to drive the hips horizontally down the track . (Impulse). As you see happening in the above photos.

Last issue is It also doesn’t take into account the role arm movement plays in developing an effective push.

What am I in favor of?

Anything that allows you to work through those two shin angle and the timing of the arm movement as seen above. You have to give your legs a chance to work first with assistance from the arms. You want to set up optimal synchronization of movement between the legs and arms as a part of the working on developing an effective drive phase.

Positions and sequence of movement for an effective push that you want to concentrate on is be on the toes, phalanges then your knee must come over the toes and then your hip must be over the knee. This allows for the glutes to drive the hips horizontally down the track creating a high impulse. The arms must move with the legs as not to shorten the duration of the push or cause a person to push prematurely. The arms during their movement must not get the person out of balance which is what cause the duration of the push to be shorten.

How to work on push mechanics and make the actions voluntary?

Once again this is not a discussion about how to use arms,, which way to move them, this is just how to use the arms to help develop an effective push. Instead of teaching an athlete to hold their breath, swing arms, drive a knee, push off the leg , drive the foot back down and so forth is way to much to think about.

The brain is a sequential machine in other words it can’t multitask. So how do we get the brain to perform the right sequence of movement at a high rate of speed?

The timing of when to use arms to set up reflexes is how to develop an effective push, how to work on low shin angles and how to get from one angle to the next as fast as possible and accomplish the number one goal, high impulse! This will get you from the set shin angle to the push shin angle quickly. Along with causing the front leg to extend as the back leg flexes or folds up rapidly all the while synchronizing the movement between the rams and legs creating an effective high velocity push. 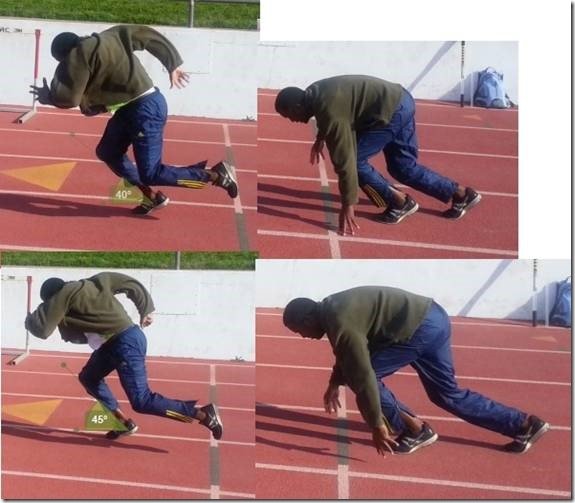 So you get a whole sequence of movement without having to think about it. The type of movement seen from Tianna Madison , Shelly–Ann Fraser-Pryce and Diodre Batson. Also from Kelly–Ann Baptiste on some of her more easier sub 11 runs. Mo Greene also did this when he ran 6.39 60m world record.

In short to practice pushing and develop your push mechanics, practice cross extensors reflex and setting up low shin angles.