This is his 35th article. Click here for his entire series. 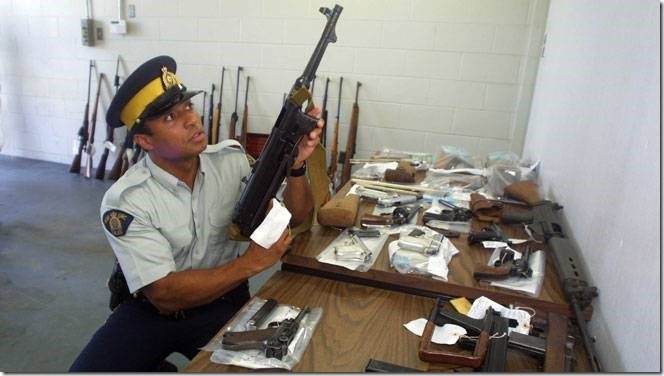 I had promised myself not to write about guns in this space. The issue is too complex; it has become a battlefield in the cultural wars; everyone has a deeply held position; there are few solutions to the problem that have a scintilla of a chance to be adopted.

However, I have just read and printed Joe Nocera’s blog from today’s New York Times. Titled “Weekend Gun Report: MLK Edition”, this piece chronicles shooting incidents in this supposedly civilized country over the three day weekend. Nocera, who usually writes about business, and occasionally college sports, just lays out the facts (who fired, who got hit, the apparent reason) over the 15 pages of copy. It has staggered me.

So, I have changed my mind. I am going to write about it. I can’t help myself.

I live in Florida; a veritable armed camp. We have fewer than 20 million residents but if the rebels in Syria had Florida’s weaponry, Assad would be dancing the tango in exile in Uruguay. Now, the nutjob proponents of guns in this state will tell you I have just made their argument for them. That they have to exercise their Second Amendment rights so if Florida is ever invaded by someone other than the infirm, or Argentinean polo players , or retirees, or the Mafia, or Russian oligarchs, or land swindlers, or pain-pill dispensers, or LeBron, or plastic surgeons, we can then go rushing out to the streets and take back the state. Comforting thought.

There are over 1.5 million Floridians who are licensed to carry a concealed weapon! For what reason? I can accept that someone who carries large sums of money might have a reason. Or, perhaps someone who has been threatened. Or, a legitimate bodyguard. But how many of those licensed gun-toters got angry today? How many of them felt frightened over something? How many of them were holding a grudge?

Two weeks ago, a shooting took place at a close-by movie theater. A 74 year old retired police captain took a concealed firearm into the show. He got into an argument with the man seated in front of him. The other gentleman was texting his daughter before the show started to make sure she was safe. The argument got pretty heated and someone wound up throwing popcorn. Popcorn! The former cop pulled his sidearm and shot and killed the other man, wounding the man’s wife in the process.

As a society we have done a pretty crumby job of keeping guns away from criminals and the insane. But I suggest that there is a much larger class of people who should be nowhere near a firearm. And, we have no tools available to prevent those individuals obtaining guns. Little children regularly access their parent’s weaponry with deadly accidental results. The despondent account for over 30,000 gun-inflicted suicides annually (nearly the same number as those killed each year in car accidents). George Zimmerman continues to flaunt multiple legal weapons. And you wonder why the rest of the word considers our gun culture barbaric?

Despite my rhetoric, I am not an “absolutist” when it comes to this topic. In my military career I fired weapons on others, in some instances accurately. When I returned from war, I made a conscious decision not to touch another firearm. However, about thirty years ago I was threatened, in writing, and stalked for seven months by a deranged woman. Representatives of local law enforcement assured me they would do everything they could to protect me, but suggested I carry a firearm for my own, and my family’s, protection. I did as they suggested after I was granted a permit by the state. Fortunately, the threat abated after the woman was arrested and I have not touched a firearm since.

Today my weapon of choice is a Louisville Slugger that I keep next to my bed. If I cannot handle an untoward situation with 34” of ash, then it’s not going to be handled.

The problem with guns is that they project aggression and violence at a distance. Knives don’t, fists don’t, even baseball bats don’t. So, the protagonist does not have to face the up-close consequences of his/her actions. Therefore, one can act with a greater sense of impunity. Concealment of a gun creates even greater complications. I believe that I should have the right to know whether or not someone has a firearm because that will dictate the nature of my interaction with them.

I have been spit at multiple times by car drivers on my daily walks. I have been hit and knocked off my bicycle twice by mirrors on pickup trucks. I have been cut off and given the finger by aggressive drivers on the highways. In all cases, the first thought I had was, “I wonder if they have a gun?” In this, the Sunshine State, they probably did.

I promise not to write about this depressing topic again.