With the Sochi 2014 Winter Olympics underway, I think it’s fitting I write a story on the Winter Games.

In my past articles on scheduling and qualifying rounds, I was trying to think of an extraordinary example of someone qualifying through the rounds, squeezing in by a hair, and eventually succeed.

Canada almost had a similar story with Charles Allen and the 110mH at the Summer Olympics, where he was initially chosen for the 4×100 relay, and eventually made the finals in an event he was not automatically selected. 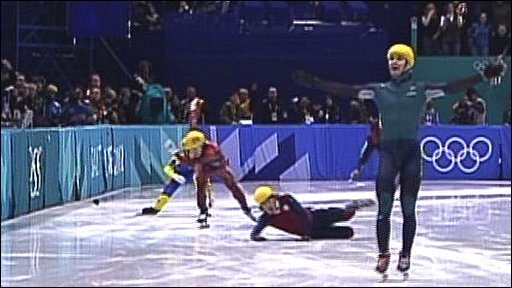 Since this blog is called speed endurance, the primary focus is on running, specifically the sprints. However, the winner of this award goes out to a speedskater.

(TRIVIA: Did you know Irina Privalova, the Russian sprinter, was formerly a speedskater?)

Steven Bradbury of Australia is most well-known for his unexpected gold medal at the Salt Lake City 2002 Winter Olympic Games in the men’s short track 1000 metres event, due to three unlikely events occurring. The stars and moons have to line up correctly in order for this to happen, but it did.

This was my favourite moment of the Olympics, next to the Canada-USA Hockey Final, of course! (Or, will it be Canada-Russia in 2014?)

In an interview after winning his gold, he said:

Obviously I wasn’t the fastest skater. I don’t think I’ll take the medal as the minute-and-a-half of the race I actually won. I’ll take it as the last decade of the hard slog I put in.

It’s amazing how we forget the decades of training and commitment in order to run or skate for less than 45 or 90 seconds! Plus, don’t forget your support staff!

In any case, a Gold is a Gold…

So what’s the lesson for this true and remarkable story?

Never Give Up! Never Surrender!