[JIMSON’S PREAMBLE – Last year I asked Dean Starkey about the PV World Record, and he replied “There are only a few guys capable of breaking that world record right now. Nothing needs to change technologically for them. For the record to be broken it will take great preparation in the off-season and good conditions at the right time. If everything lines up it will go down. It is definitely not out of reach.”  Dean was right.] 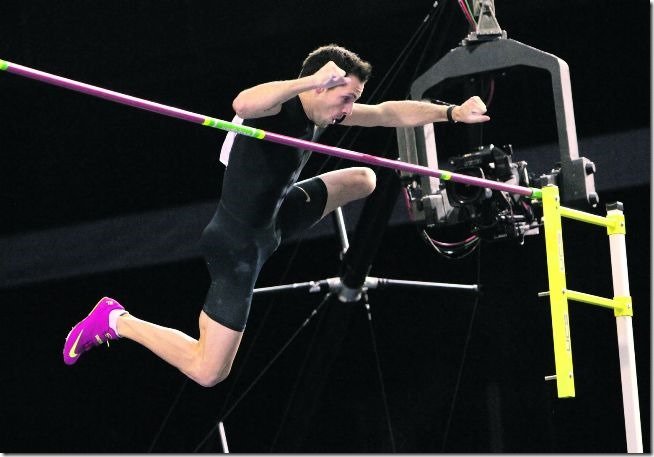 His last post titled Misconceptions: Training the Air and Bridging the Gap Between Strength and Speed were a huge hit on the social media circles, and here is my Freelap Friday Five Interview with him.

6.16! Pole Vault World Record has been reset! Was it a case of the multis?

If you are a Track and Field enthusiast then you are probably aware at this point that the Indoor World Record in Pole Vault was broken recently. Renaud Lavillenie cleared 6.16 (20’2.5”) meters at Donetsk in Ukraine to break Sergey Bubka’s 21 year old record. Renaud has done very well over the course of his career but I was certainly surprised when I had heard that the record went down. I immediately ran to my computer and watched the vault and it was a thing of beauty. Not only was it a first attempt clearance but he also had some room to go and didn’t just squeak by the bar. Of course if you watch some of Bubka’s clearances at similar heights you will see the same thing.

Overall, this indoor season has been quite a thrill thus far. This year is always the most exciting indoor season that will be seen for 4 years because of the fact that there are no Outdoor World Championships. Everyone is gearing up for Indoor Worlds and adjusting their training accordingly and it has definitely shown. Already this year we have seen a few American and World Records broken in a few distance events and now a world record in the pole vault! It will be exciting to see what happens at Indoor Worlds and during the outdoor season this year.

One thing that I thought was very interesting when I looked back at Renaud’s recent performances was that in the fall of 2013 he competed in the Decathlon. He also has a Heptathlon under his belt back in 2008. It is not super uncommon to see guys who are good at the multis end up specializing or guys who are specialists early on end up turning in to multis, but I was pretty shocked to see this at this point in his career. Coming from a heavily biased view towards the multis, I have always been a huge advocate for the multi-events and I really think it brings out the best of athletes.

If we look at athletes like Derek Drouin, we similar results. Derek has notched Bronze medals in the 2012 Summer Olympics and 2013 World Championships as well as a slew of NCAA National Championships all in the High Jump. Some people were scratching their heads last year when they saw him competing in the heptathlon indoors or when he ran the 110 hurdles prior to High Jumping at regionals during his senior year. I personally think it was a very smart decision on his coaching staff’s part and here is why.

When we see youth athletes now a days who are specializing very early on and reaching their peak in middle and high school, we can see that we have a problem on our hands. There is a lot of research out there that says kids need to be generalists and should not specialize until much later on down the road. This will lead to much better long-term athletic development. When an athlete trains for 7-10 events as a multi he/she is essentially doing the same thing.

When you are a generalist you become very well rounded and don’t have too many weaknesses. Then when it comes time to specialize and commit yourself to one area of training as seen in the pole vault or the high jump, you are more likely to understand the event better, your overall fitness level and biomotor abilities are likely to be much higher or have a higher ceiling of potential, and you are likely to not be as much of a headcase. I say that last part because I have seen many high jump and pole vault specialists who are so focused on their events that they become major headcases and end up psyching themselves out a lot of the time. If you are a track coach then you know exactly what I am talking about. Training for the multis forces you to be forgetful and narrow your focus and become very strong psychologically. Couple that with some of the physiological advantages I mentioned above, and you have a recipe for success.

Whether Renaud Lavillenie’s World Record has anything to do with him competing in a multi a few months prior is surely debatable, but I do think it is worth noting. It will be exciting to see what the future holds for this 27 year old.