This is his 40th article. Click here for his entire series.

Any sport whose results are not measured by a stopwatch, number of goals, a tape measure, tries, runs, baskets or other objective criteria qualifies as a “beauty contest”. If a sport contest is determined subjectively by the scorecard of a judge, the cynic in me always figures “the fix” is in. Maybe I just hate all beauty contests.

Take the Miss Universe Pageant, for example. Every year the prohibitive favorite is Miss Venezuela. For some reason Venezuela has accumulated more international beauty titles than any other country, including seven Miss Universe winners, six Miss World, six Miss International winners and two Miss Earth. In an unprecedented stretch from 1991 to 2003, Miss Venezuela was in the top six of Miss Universe every Year. In 2008 and 2009, Dayana Mendoza and Stefania Fernandez won back-to-back titles. Last year, 2013, Venezuela’s Gabriela Isler was Miss Universe at the same time as Alyz Henrich held the Miss World crown.

So, unless Miss Venezuela trips during her bathing suit jaunt, or is caught picking her nose during the talent contests, or mistakenly glues a false eyelash to her ear, we know who is going to win.

Or, take the Westminster Dog Show. In this year’s contest, featuring 2,845 dogs, Best in Show was won by Sky, the Wire Fox Terrier. Not to be mistaken for a Skye Terrier. To me, the breed is one of nervous, shaking little creatures who look like they have been foraging in the garbage cans behind the local methamphetamine lab. Westminster has been in existence for 138 years and a terrier has won Best in Show 46 times; 14 of those by a Wire Fox Terrier. Sky was a “wired” terrier. Now, it might be that his handler looked like he could play right tackle for the Oakland Raiders and intimidated the elegant judge. There are no soothing words that loquacious announcer Michael La Fave could use to convince me the show was not rigged. Plain and simple, Nathan, the Bloodhound, was the best.

This brings me to judged sports.

I don’t like gymnastics because I don’t understand the criteria. I cannot tell the difference between a good dive and a great dive, either on springboard or from the platform. Any time a television announcer says “technical merit” or “artistic impression” I cringe a little and turn my attention to reading material. I just don’t trust those sports “lifers” who present themselves as experts and tell us what is good, bad or great. The biggest problem, for me, with the proliferation of new acrobatic, X-Game derived winter sports is that most of them are scored by human judgments. And, the skeptic in me says they are now in the same category as the BCS rankings in college football and the results of a WWE wrestling match.

The result of the Ice Dancing competition in the Sochi Winter Olympics was another example. The American pair of Meryl Davis and Charlie White won Gold over the Canadian Olympic defending Gold medalists, Tessa Virtue and Scott Mole. Incredibly, both pairs are coached by the same woman, Marina Zoueva, a Russian. The Canadians were quoted as saying, “We sometimes felt [Zoueva] was not in our corner”. The coach responded, “I kept both couples in my heart”. In horseracing, if a trainer has two horses in the same race, the horses are paired as a betting “entry”, so the trainer cannot be accused of fixing the contest. Skating could learn something from the Sport of Kings.

CBS News, in their on-line reporting, made some strong comments. “Performances are evaluated for subtleties not visible to normal people. We are left to wonder if results are predetermined…because the winner’s style was currently in favor.” The Canadians have a style which is smooth, subtle and artistic. The Americans, on the other hand, are fast, athletic and exciting, which are modalities currently in vogue. I am convinced the Canadian pair should have won. Like Nathan, the Bloodhound, they got screwed. 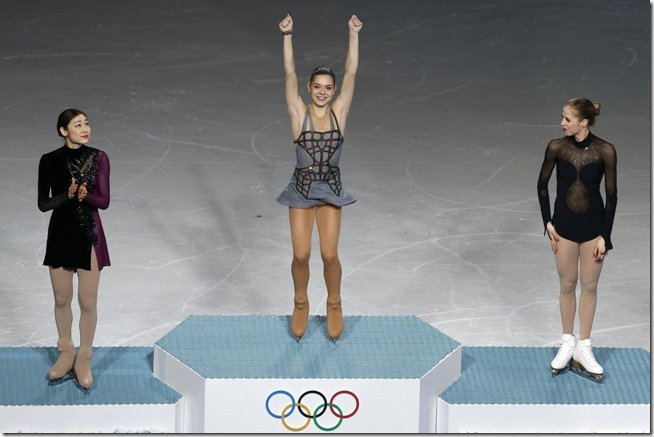 In my opinion, the defending Women’s Gold Medalist, Yu Na Kim, was also treated unfairly. A young [17] Russian skater, Adelina Sotnikova, defeated her for the Gold on the back of an athletic performance full of jumps and spins. The elegance, line and artistry of the incumbent were passed over by the judges. Sotnikova’s final skate looked like “a kind of Easter Egg hunt on ice”, according to Jere Longman of The New York Times. Longman went on to say, “Some have questioned whether Sotnikova’s rising artistic marks this season were overly generous. Collectively they are known as the program component score and consist of skating skills, transitions and linking footwork, performance, choreography and musical interpretation. Sotnikova’s component score improved dramatically, from 60.31 points early on the Grand Prix circuit to 74.41 [at the Sochi Final].”

I disagree with Longman’s opinion that, despite the controversy, she won anyway. The South Korean, to me, was a clear winner. As Longman also admitted, “…her victory has become less a coronation than an autopsy.”

Maybe what we need is Venezuelan skaters.