This is his 41st article. Click here for his entire series. 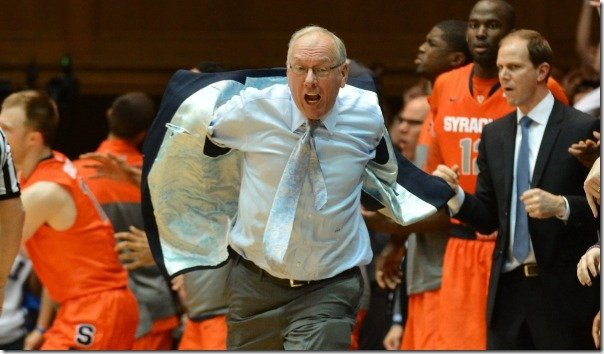 It has not been a good month for civility by college basketball coaches.

Several weeks ago, the University of Syracuse basketball coach, Jim Boeheim, was ejected in the closing 10 seconds of their game with Duke University, played at Cameron Indoor Stadium. The usually taciturn Boeheim had a complete meltdown after his star swingman, C.J. Fair, was called for a charge on the baseline as he attempted to score on the Devils’ Rodney Hood. He stormed onto the court, clumsily attempted to rip off his blazer, cursed repeatedly at two referees and did more pointing than a beagle at a duck hunt. For his trouble, and histrionics, Boeheim received two technical fouls and was thrown out of a game for the first time in his 38-year illustrious career. Syracuse lost the game and its number one national ranking.

Later in the week, during an interview on “The Herd” on ESPN Radio, the coach admitted, “There’s no question I went too far”.

Last Saturday night, the $5.2M a year head coach of the University of Kentucky, John Calipari, intentionally goaded the refereeing crew into granting him an early exit in the contest with the Gamecocks of South Carolina. The Kentucky squad was the pre-season number one ranked school in the NCAA, but has played lethargically this season. They have accumulated 8 losses, and will probably drop out of the top 25. South Carolina, on the other hand, was ranked number 178 in recent Yahoo Sports rankings. At the time of Calipari’s cheesy exit, the Gamecocks were blowing the Wildcats out of their home gym. Instead of competently attempting to motivate and rally his troops during the game to play to their potential, Coach “Cal” spent the entire evening openly berating the officiating crew.

After the game, won by the underdogs, Calipari refused to answer press questions or even attend the post-game conference. Instead, he sent out his Assistant Coach, John Robic, and two freshmen players. “Profile in Courage”?

The close game on Saturday between the University of Cincinnati and UConn also had some ugly scenes. A verbal altercation between the referee and Cincy coach, Mick Cronin, almost escalated to a brawl. Cronin was disputing a call in such an animated way that he had to be restrained by his players and his assistants. After the game, the diminutive and combative coach whined about not getting respect from the referees.

Churlish behavior by coaches is not limited to “big time” schools. In a University Athletic Association [UAA] regular season finale on Sunday, March 2nd between NYU [where I teach] and Brandeis, a school named for an eminent jurist and ironically nicknamed “The Judges”, the Brandeis coach, Brian Meehan, also got himself ejected in the first half. Brandeis went on to win by a whopping 39 points. What a wonderful display of sportsmanship; at the Homecoming Game, no less.

Petulance by coaches used to almost be the exclusive province of salty-tongued baseball managers. Leo Durocher, Earl Weaver and Lou Pinella were expert practitioners of the art of bad, on-field behavior. It now seems that the virus of incivility has invaded the college hardwood sidelines. I am a voracious consumer of the sport. I do not necessarily have a single rooting interest but do favor certain programs. I love the scrappy teams that seem to appear every year at the University of Wisconsin. I have cheered regularly for Duke and am a huge admirer of Coach “K”. I really like the balanced teams that have been put together by Larry Brown at SMU and Jim Crews at St. Louis University. I am partial to Billy Donovan’s Gators at the University of Florida. I also find myself pulling for Tom Izzo’s Michigan State Spartans.

Notice my focus on coaches. College basketball is a “Coach’s Sport”. More than any other sporting event, it is a universe where the influence of a coach is pervasive. Whether by recruiting the right players; or establishing the right “system”; or training athletes correctly; or making the right in-game adjustments; college coaches can take a big piece of the credit for a team’s success and a big share of the blame for their failure.

I am still “old school” in the belief that coaches also are obliged to participate in the shaping of the character of these young men. And that is what gives me pause when watching some of these diva coaches prowl the sidelines. They are constantly “working the referees” to gain advantage. They continually use offensive and obscene language, within earshot of spectators and available for lip-reading on television. You would think that these were life-and-death encounters instead of scholastic athletic contests.

Jay Bilas, the former Duke player and present ESPN analyst, had an interesting take on this recent spate of incidents. He was one of the commentators on the Duke-Syracuse broadcast and raised the following question several days later:

“I think there’s a lack of humility with the way referees are addressed; the way they’re dealt with within games. We’ve got a unique problem. Coaches in the NBA behave better than coaches in college, who claim to be molders of young men. How can that possibly be?”

This season, I have been asking myself the same question, Jay.