This article is guest blogged by Ryan Banta, an assistant coach at the Ladue/St. Louis Lightning Track & Feld club.

To view all his articles on this Blog, click here.

Acceleration is a skill and should be trained as such. Maximum Velocity can be trained and improved. I believe it is important at times to blend both elements of elite sprinting in practice simultaneously. Roberto Bonomi in his lecture at Sundsvall in 2011 he discussed how in the most elite sprinting requires great stride frequency. That is why I feel it is important to set your training to improve those qualities in specific training modules.

Enclosed below is a training module used by the great Gary Winkler that I believe helps shake up that stereotype leading to better stride frequency at the same time allowing for acceleration speed traps to improve the drive phase. As a coach it is very important to have these areas marked off with cones to giving the athletes landmarks. In addition you can use these cones as holders for the free lap timing system pods that give you hyper accurate timing break downs of each stage of our intervals.

See also  SpeedEndurance TV - Back to the Basics of Speed

Recently because of bad weather one of the great coaches in our area was forced to restructure his training. He has been blessed with a young talented female high school athlete who has run great times in the 24.75 in 200m and 57.26 400m. In addition she is a great PR in the long jump over 18 feet.

Unfortunately, the weather has keep coach from being able to do traditional 400 centered training. However, coach had a great plan in place to make his athlete the most powerful starter and explosive athlete he could build. Now after a winter of acceleration, sled pulling, and plyometric work she has a much improved block start that will allow her to carry more speed reserve in the second 100 of a 200 dash. If she stays health I believe a couple individual state titles are in her future.

In one of our recent practices I have been pleasantly surprised how nicely these modules work to teach the skills of high speed sprinting. 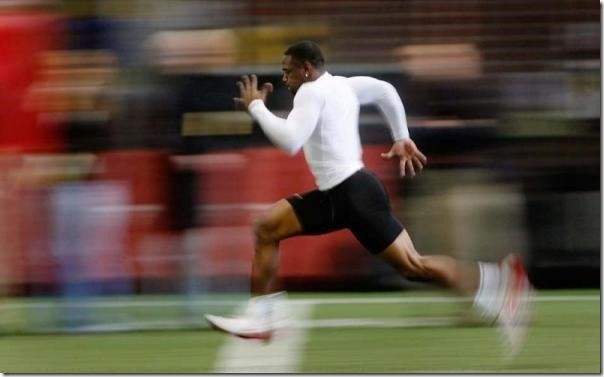 Note Build stands for your acceleration phase. This acceleration can be done out of blocks or whatever your athletes are comfortable doing.

Float according to Gary Winckler uses this cue to describe the Bud Winters relaxation runs. Run as fast as you can while being as relaxed as you can. The point is to maintain your speed with less effort. The athlete should feel as if they are floating OVER the track.

Hit is basically opposite of floating. Hitting is a concentrated period of aggressive/intense efforts. I like to see a piston like action of the legs. Vince Anderson used to talk about how old coaches evaluated fast sprinters by saying “he/she can really pick em up and put em back down.” That description is what we want to see here with an aggressive piston like action into the track. Lots of force into the track and force return from the track.

Ryan Banta is an assistant coach at the Ladue/St. Louis Lightning Track & Feld club, where the club has assisted athletes in achieving 6 national titles, 31 All American performances, and 61 national qualifiers.   He has earned a USATF level II certification in sprints, hurdles, relays, and endurance as well as a USTFCCCA track and field technical coaching certification.

He has a new book coming out (Summer 2013) titled Sprinter’s Compendium, a “one stop shop” for theory and practical information for any coach looking for real world strategies to improve sprint training for any type of athlete.