This is part 13 of the Freelap Friday Five Series, Season Three. To review the past 41 interviews, click here.

Part 7 was Dr Jess Greaux, on Rehab and Biomechanics

Part 8 was Merlene Ottey – Queen of the Track

Part 9 was So You Want to Be a Decathlete? w/ Eric Broadbent

Part 10 was Jay DeMayo, U of Richmond’s S&C Coach.

Part 12 was James Smith, aka “The Thinker” 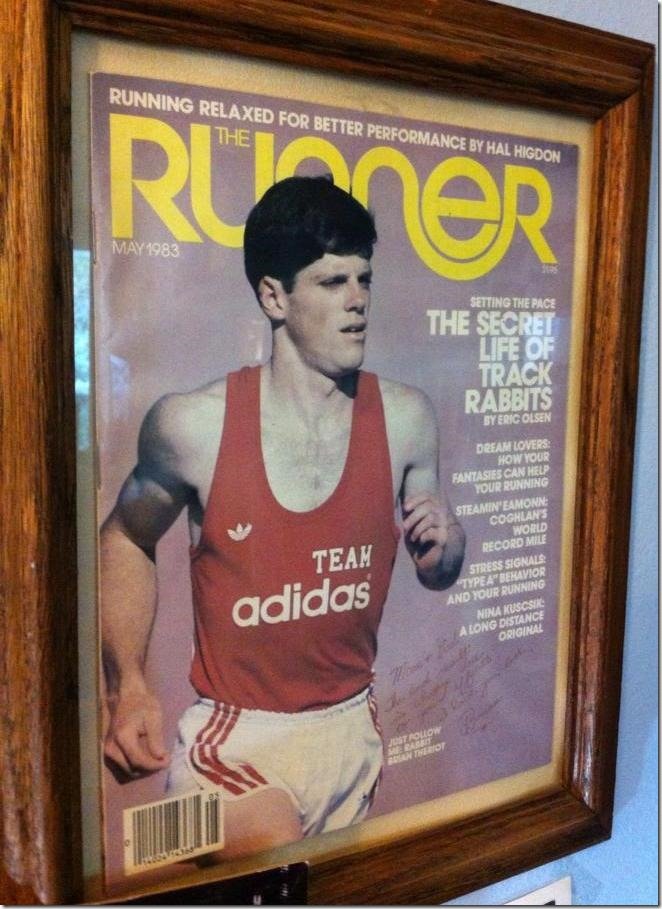 Way before Matt Scherer was a famous runner-turned-rabbit, we had another famous rabbit from the 1980’s.

But this rabbit was special.  He was actually a good sprinter who moved up to the 800m and Mile.  Good enough to turn Pro, get a shoe contract, make money in Europe, and even do a few rabbit gigs.

Interview with Brian Theriot – From Sprinter to 800/Mile

Question 1) Most sprinters dread the idea of running middle and long distance.  You were initially a sprinter with a 46.9 400m in high school.  You eventually moved up to the 800m and 1500m, and even broke the 4 minute mile 6 years later.  Who initiated the idea, and why did you move up in distance?  As a refresher, can you tell me your PRs from 200m up to 10K?

The idea to move up from the 400 meters took place after my freshman year at UCLA where I was stuck in the high 46 seconds for 400 meters.  Coach Jim Bush and I met along with then distance coach a future head Coach Bob Larsen and with Coach Hal Harkness who all agreed that I might move up to the 800 meters for my sophomore year 1977.  I moved up personally because I wanted to maintain a quest to be world class in running and I did not see myself ever going below the high 45 second range in the 400 meters.  I did not have 10.4 100 meters speed or 21 seconds low 200 meters speed which is a requirement to run in the 44 second range for 400 meters.  We all felt that I could best benefit UCLA track by moving to the 800 and still being able to double on the 1600 meters relay.

Question 2) Your UCLA years were 1975-1980.  Can you mention some of the middle distance training you did back then?  How much “mileage” did you do?  Did you worry about competing too often?  How many races (including heats & relays) did you run every year at UCLA?  And when you turned pro?  Today, we worry about over-racing!

Brian Theriot:  At UCLA I trained twice a day once moving to the 800 and 1500 meters.  My mileage would range from as high as 100 miles per week to as low as 40 miles per week in season.  Post Europe in the Fall I would hit heavy miles and heavy hill training with runners like Steve Ortiz pushing me along with Conrad Suhr and Brian Russell.  Under Coach Harkness and Coach Larsen in the Fall I would run in the morning 4-5 miles.  Afternoons 8-10.  Twice a week in the Fall repeat grass runs of 1000 yards or more and also heavy interval training on golf courses running fairways hard and jogging hole to tee for the next repeat.  Heavy track training would commence from February to June including repeats of 1300 meters and 800 meters.  Speed training would include 200’s in the 23-24 seconds range with 300’s down as low as the 34 to 35 second range.  We also incorporated heavy hills training.  At UCLA at most 20 races to 25 per year.  Once leaving UCLA my races would be up to 35 a year including the European tour.  I never worried about over racing as long as my base training was strong.  I trained with Steve Scott, John Walker and even lived with John Walker in New Zealand along with great Irish Miler Ray Flynn.  The school of thought was hard training then race as much as possible.  Racing kept us in shape during the Summer Euro Tours.  Over racing is a fallacy if you have a strong base.  The more you race the more money you make in Europe.

See also  (The making of) Usain Bolt Coming to Rome 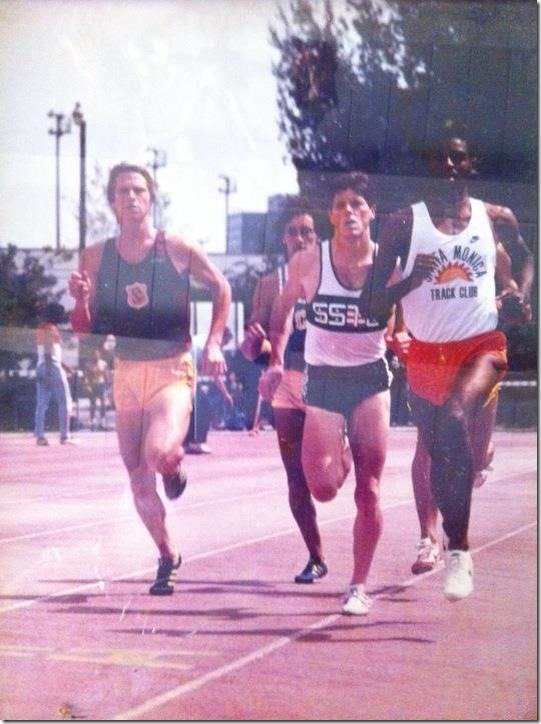 Question 3) Do you believe “speed rules” in all events (i.e. your natural speed made you competitive in the 800/1500) especially knowing you can outkick someone if your legs were fresh enough on the homestretch?  How do you convince an aging 400m runner to move up to 800m?

Question 4) Let’s talk Professional track and field (your years from 1980-1988).  Today we see athletes struggling to make even $10K a year from a shoe company.  Getting into the big Diamond League meets require a good agent and the numbers to prove it.  You were easily making 6 figures a year.  What is the difference between now and then?  What advice can you give to young T&F athletes today (other than to go into Football!)

Brian Theriot:  Race as much as you can in Europe.  Small meets are disappearing.  In the USA the track meet circuit is dead.  Completely dead other than Pre and Penn.  Making money now, the way we did in the 80’s as distance runners is dead.  There are just not enough meets.  My advice is to hook up with a good team with great runners giving your coach or agent leverage to get you in great A races and invitational races.  I would often double in meets.  Set pace say for the mile and also run the 800 meaning a double pay day.  Not many track athletes are capable of playing football.  I was recruited by over 50 div. 1 schools as a running back out of high school.  Football is a way of life and a mentality that few track men have.  The only way to make money now is to be truly the best in your event at the USA level.  The difference between now and my era is that the number of meets is down to near zero in the USA and that includes indoors.  The days of the great meet promoters in Europe like Andy Norman of England are gone.  Shoe contracts for athletes today are near nothing.  I took my track skills and signed a great shoe deal with Adidas.  I also turned to Hollywood an modeled, did commercials, and acted as well.  Track today I am afraid is dead.  There is no fan interest.  No meets.  No media interest.  College dual meets disappearing and little fan attendance on the college circuit.  My best advice.  Get your full ride to college and get your degree.

Question 5)  How do we save T&F, the sport as a whole, especially in the USA.  We don’t need any help 16 days every 4 years, but it’s those 4 long years (minus 16 days) where the sport needs desperate help.

Brian Theriot:  You save track and field in the United States by disbanding the current staff at USATF in Indy.  Fire them all.  You move the USA track and field governing headquarters to Los Angeles months prior to the USA Olympic Marathon Trials.  You hire a retain the best sports marketing talent to run USA Track and Field.  You mandate 12 major outdoor meets each year domestic USA and 8 major indoor meets domestic USA each year.  You groom the track and field running base that is huge in high school to ready for consumer retained interest after they leave high school.  Track and Field cannot exist with a headquarters in a minor media market like Indianapolis, Indiana.  And the sport cannot flourish with the type of executives it continues to retain to run the enterprise.  The major shoe suppliers need to diversify their product lines to include more products that are sold at retail that support the sport.  Even to the extent of jersey sales with great USA athletes branded.  The entire sport needs to be re thought.  This includes promoting the sport to boys and girls clubs, bussing in youth to meets sponsored paid, festivals that surround meets to draw greater fan base with an example being the great Pepsi track meet held at UCLA each year with a fabulous Mardis Gras festival next door.  Track is boring to the consumer of today.  The NFL, NBA, MLB have all gone to fanfest environs at games.  Shows, displays, athlete interaction and more.

The core of track remains high school and its booming.  Yet the erosion started in California when men and women champs were combined at the CIF champs level.  What did they do?  They wipe out the coveted frosh-soph championship division at all levels leaving only Varsity champs at the division level then the Masters Championship meet.  So in number of races lost by a frosh soph athlete that is not good enough to run varsity you lose division level prelims.  Division level finals.  Masters prelims.  Masters finals.  That’s 4 races if you are only in one event and maybe up 16 competitions if you are a frosh soph good enough to compete in 4 events all the way to Masters finals.  Now from a fan perspective.  By cutting out the frosh soph level think of how many tickets go unsold to families that would be coming to watch the frosh soph competitor.  Now and just brought to my attention.  I am going to the UCLA dual meet vs. Washington this Saturday at UCLA, PAC 12 meet.  UCLA is lucky and loaded with athletes at 60 men and 60 women.  Fun.  Great.  Huge dual meet.  Oh no.  Guess what?  Some PAC 12 dual meet rule that each team can only have 36 competitors per team per dual.  So what happens.  UCLA has to notify many athletes that they cannot compete at all in the dual even as non scorers.  In my day or when “red shirting”, you could compete as a non score athlete in the event.  Great to keep the tickets selling to as many friends and family want to see you compete despite not being able to score.  It gets worse.  The athletes told they cannot compete are not even afforded the chance to compete say in a second race or second flight of non score athletes in track or field events.  And there are no plans for these athletes to compete say right after the 1600 meters final relay of the dual.  Or say, right before the official meet starts.  The sport is bent on being killed by administrators, non marketing people, and sets of rules designed for chess and not sport.