See Part 1 of The Complete Guide of Long Jump Statistics.

This article was guest posted by Ian Graham.

Ian also wrote Michael Johnson Deep Dive, an in depth look at his performances and splits, and the Complete Guide to 4x100m Relay Statistics.

In Part One,  I primarily looked at the men’s event and relevant statistics. Here in Part two I am going to look at the women’s event, championship performances (Olympics, Worlds, Europeans) in both the men’s and women’s events, and take a closer look at Carl Lewis and Heike Dressler’s performances. 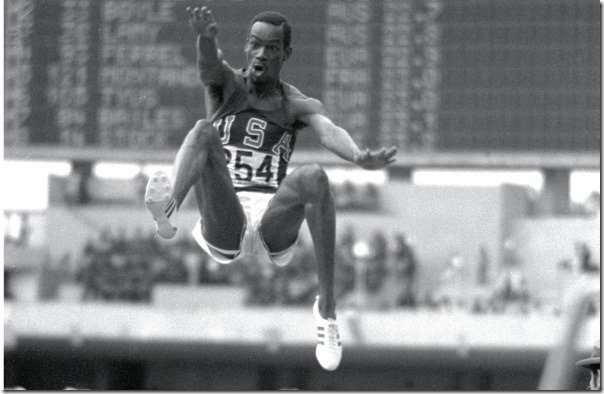 NOTE: All of the above records are also the European Records

European 7.00m Plus Jumpers By Nation

The Most 7.25m or Better Wind-Legal Jumps…

The USA clearly dominates the mens all time lists for the long jump, with 11 jumpers over 8.50m out of a total of 23 jumpers all-time over 8.50m. In the womens event, it’s the EUROPEAN athletes who dominate. There’s been 68 women over 7.00m, 9 of them come from the USA, while 53 come from Europe. Of the all-time top ten female jumpers, only two of them have taken place since the year 2000, and both jumps were by Russian athletes (2002 and 2004).

The Longest JUMPS of All Time – Men’s & Women’s Events…

*** All Time Number of Wind-Legal and Wind-Aided Jumps *** 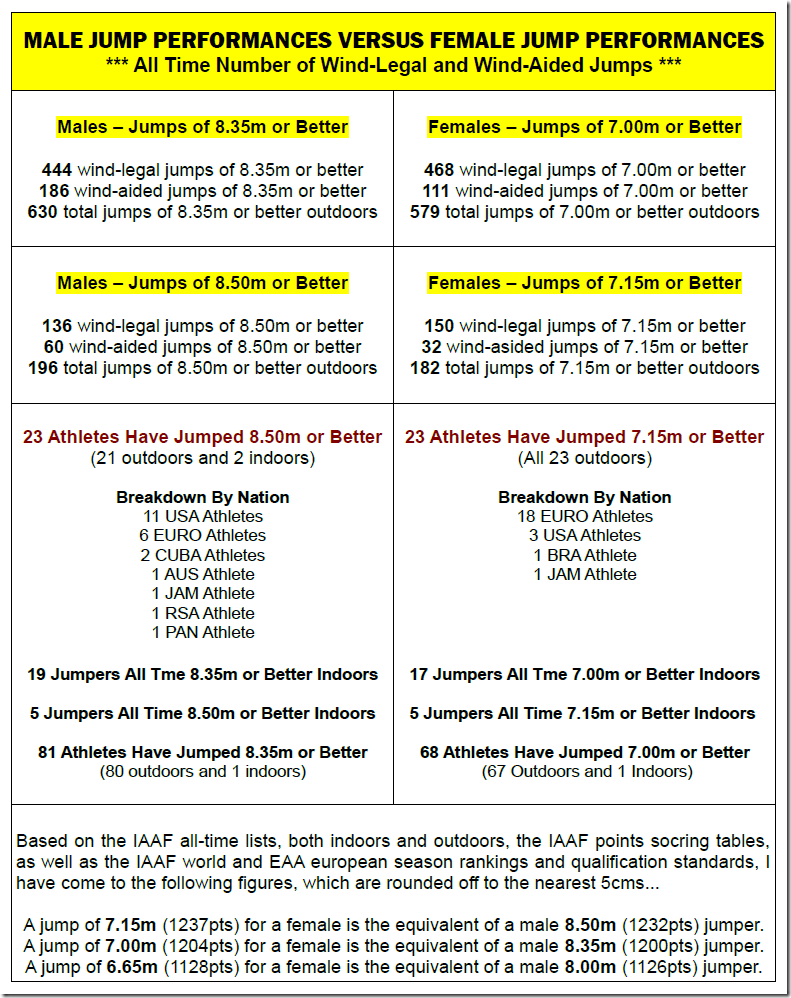 Interestingly no nation has ever clean-sweeped at a world indoor championships, in either the men’s or women’s event. There’s only been one women’s world indoor championships with a winning jump of 7.15m or better (Brittney Reese, 7.23m in 2012). Reese is the only USA athlete to have jumped over 7.15m indoors. Jackie Joyner Kersee and Dawn Burrell are the other two USA athletes who have an indoor personal best of over 7.00m.

In the men’s long jump event, the only two competitions in history, that I’m aware of, were the top three athletes jumped 8.50m or further, are listed below… 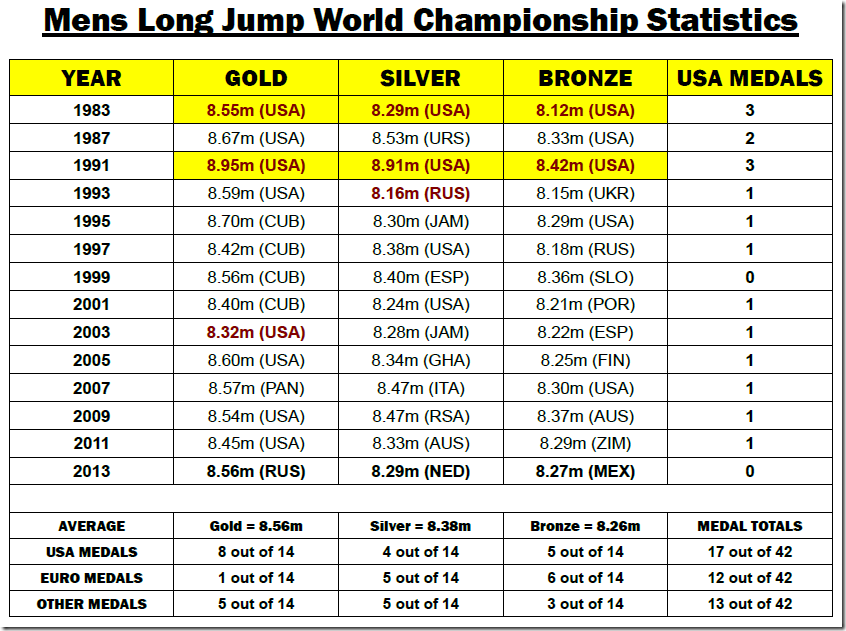 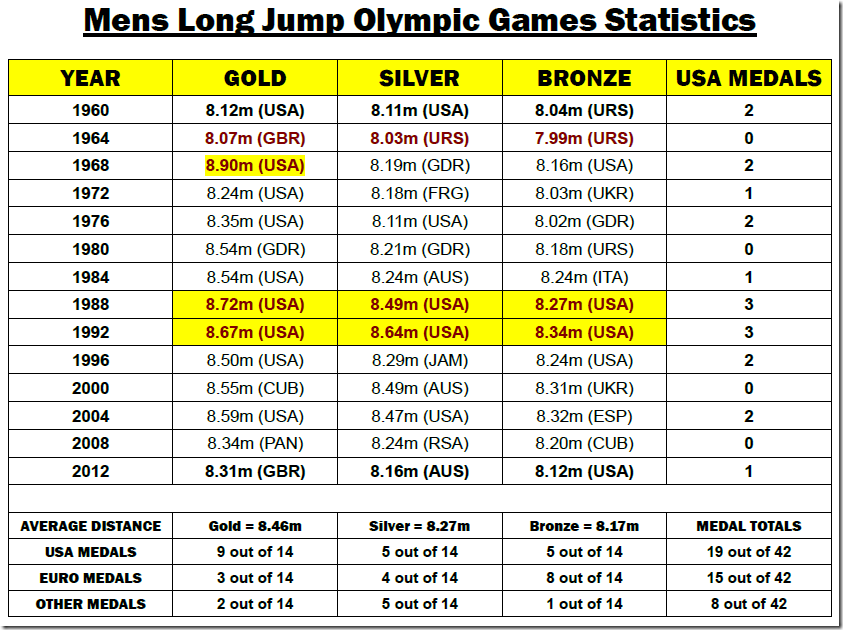 Bob Beacon’s winning jump of 8.90m won the 1968 Olympic gold medal by 0.71cms. The second place athlete was GDR athlete Klaus Beer, who jumped 8.19m. Ralph Boston of the USA took the Bronze medal with 8.16m. Ralph Boston won silver four years earlier in Tokyo, and four years prior to that in Rome 1960, he took the gold medal. 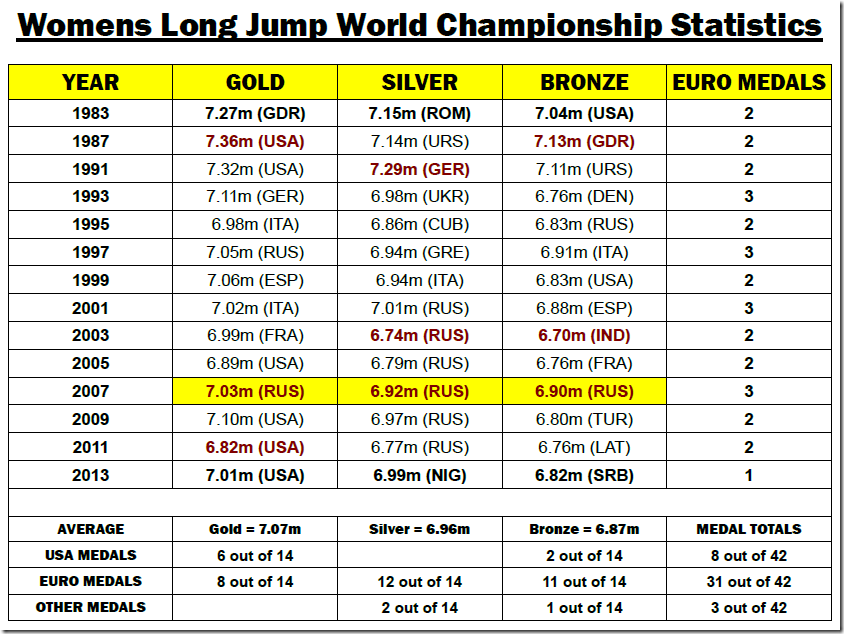 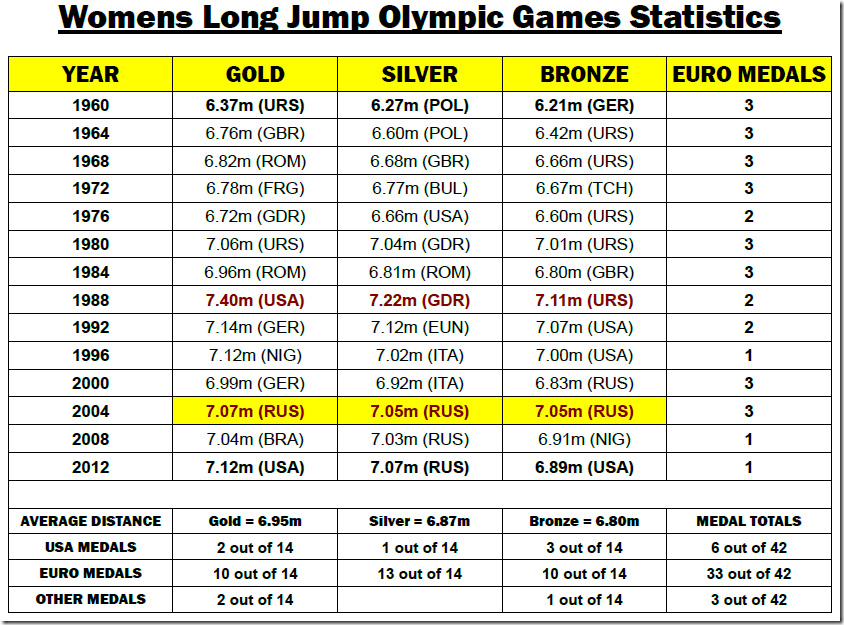 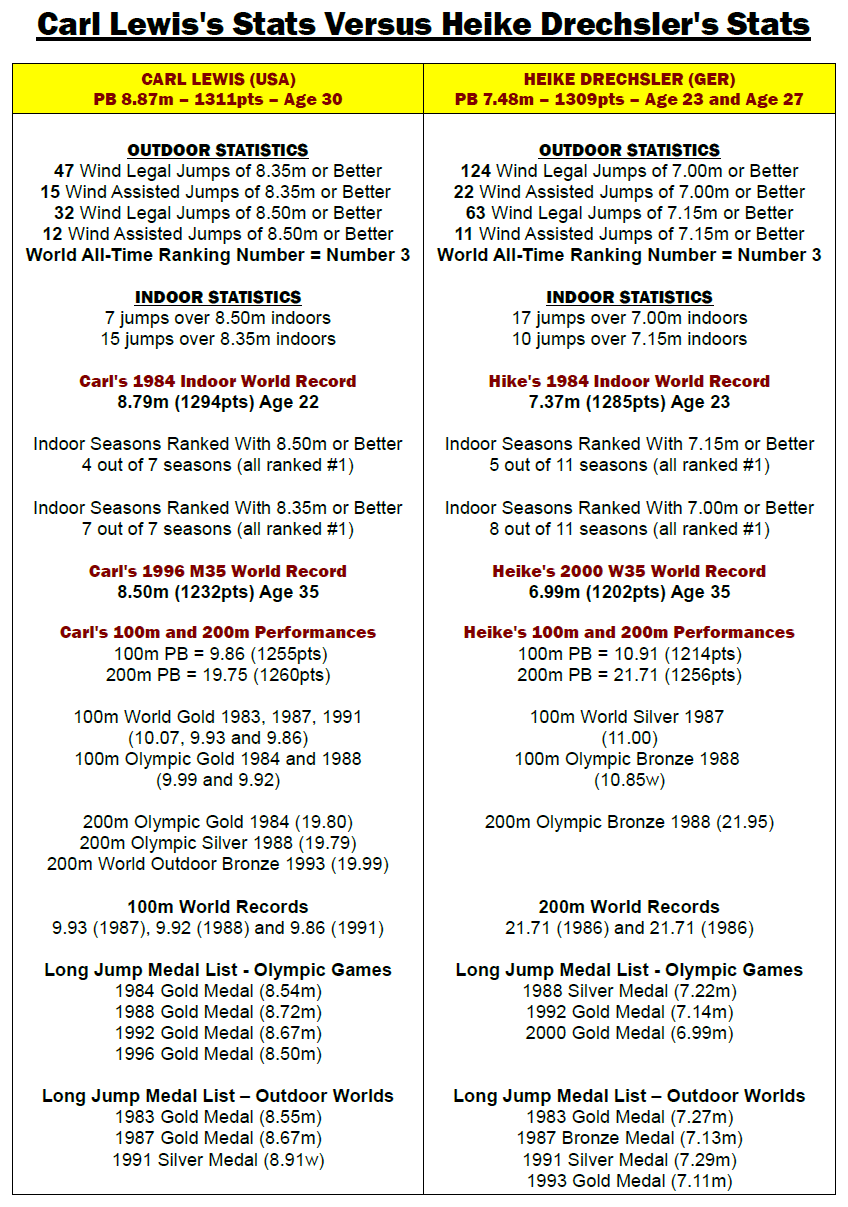 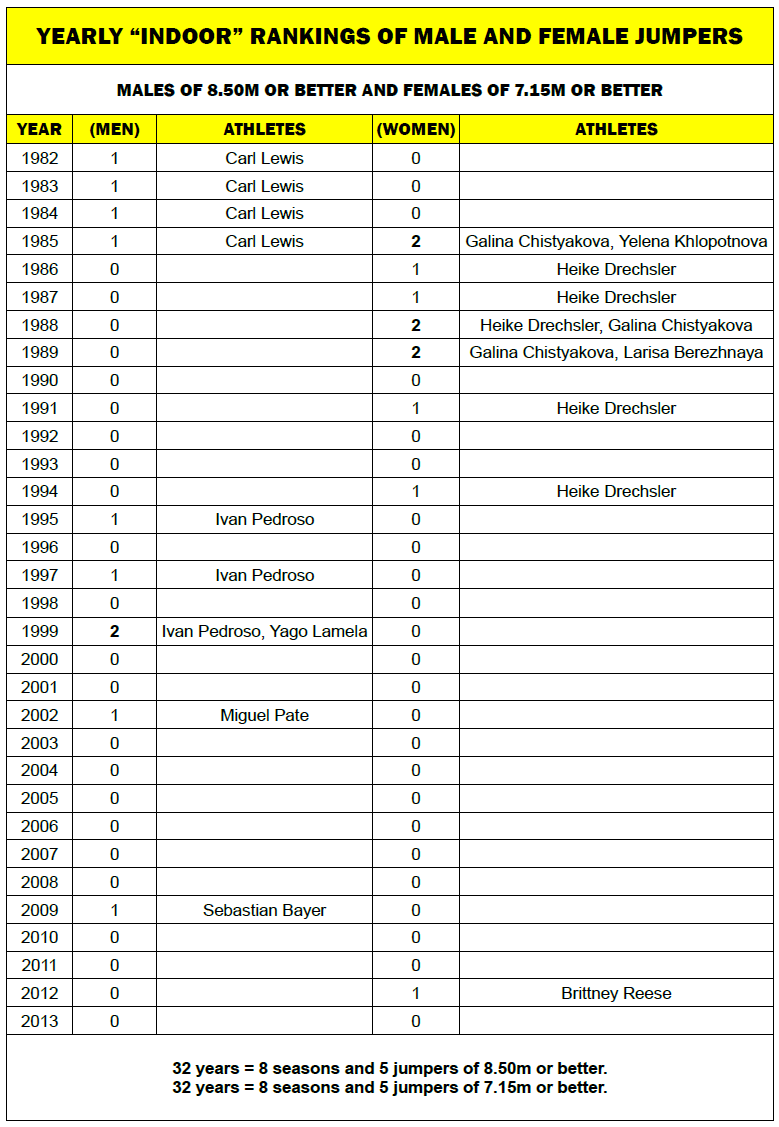 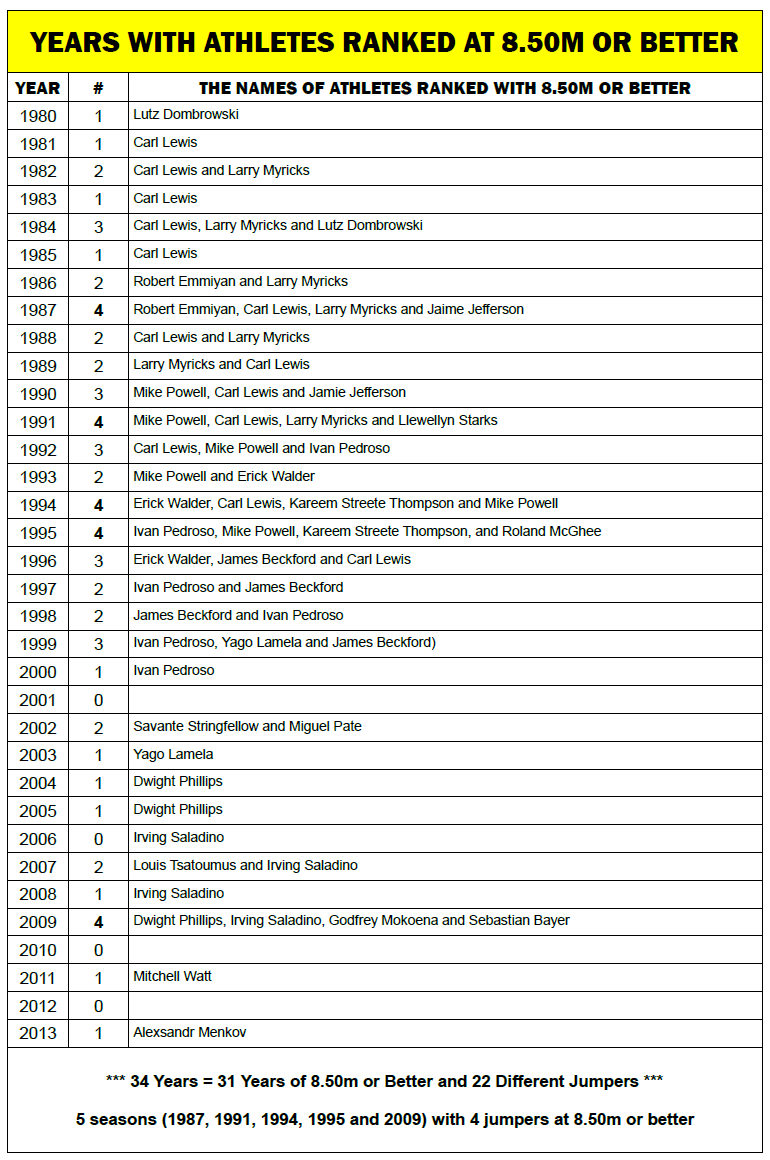 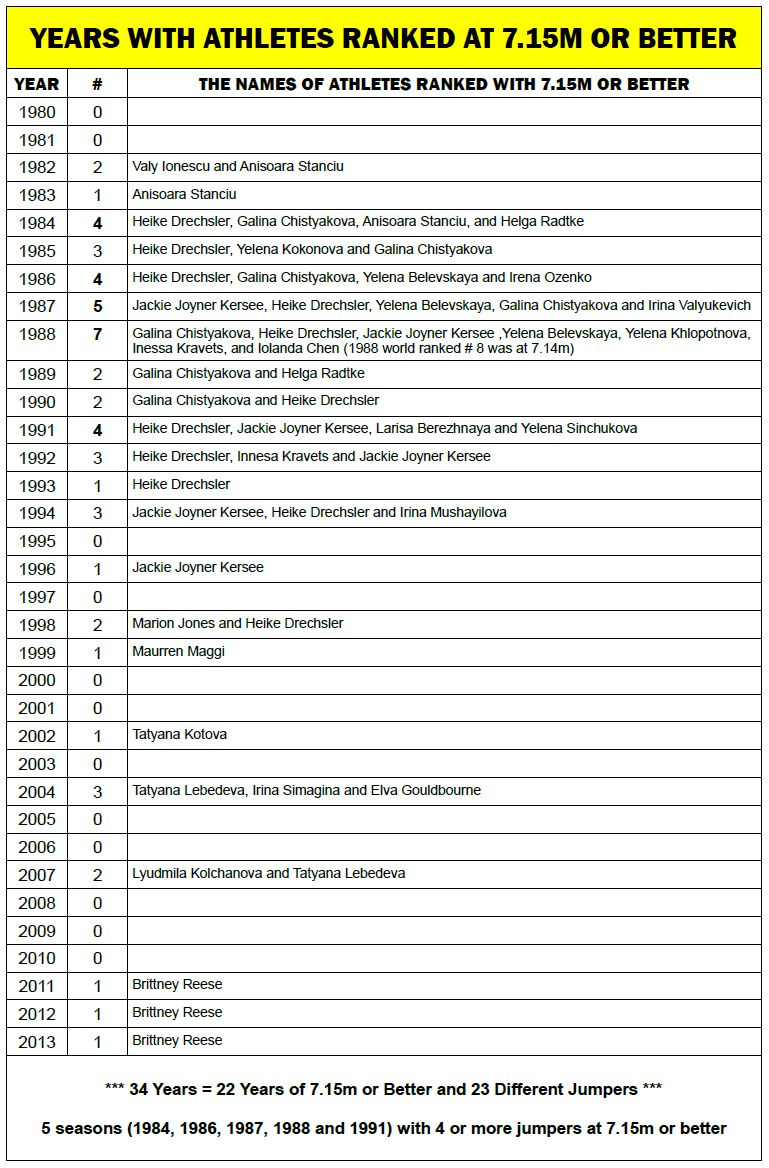