This is his 46th article. Click here for his entire series. 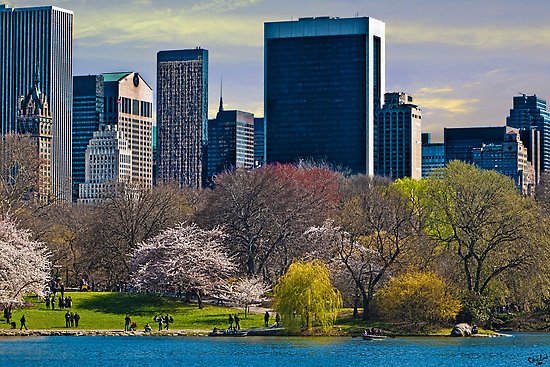 The tree pollen is off the charts. I arrived yesterday and immediately began to sneeze and wheeze; my eyes are bloodshot; my throat raspy. The street trees have begun to bud. The horse manure from the hansom cabs is ripening in the warmer air. Crocus and daffodils are beginning to emerge. In no time at all they will be replaced by tulips and lilacs. Central Park has begun to gussy up. This morning the deli on University Avenue had buckets of pussy-willow and forsythia branches out on the sidewalk.

Sorel and UGG boots have been put away and intrepid fashionistas have begun to trot out the open-toed shoes, sandals and even flip-flops. The Asian pedicure artists are booked solid. Aerobic equipment in the health club hums in preparation for the bikini season. Cafes have begun to put out their sidewalk tables and umbrellas. Dogs on leashes scurry to sniff the new fragrances. Building superintendents have begun to hose down the walkways without fear of creating ice patches.

See also  Why Donuts are Bad for You

Woody Allen’s new show, Bullets Over Broadway, is about to open around the corner from my hotel. The Mets are at home today against the Cardinals at Citi Field, at the other end of the 7 train. The onslaught of European tourists, here for Holy Week, has departed, making walking far easier. I had a late lunch yesterday at an outdoor table in Bryant Park and remembered there was a day when the space was infested with junkies, pushers and pimps.

Fifty years ago this city, my city, was a far different place. I was both a student and a cabdriver during the week. On weekends I was a beer vendor at Yankee Stadium. Those were the days when you could drink alcohol at age 18 but could not vote until you were 21. That paradigm, for some perverse reason, was reversed. I would go on to vote, in 1964, for Lyndon Johnson over Barry Goldwater, partially on the Texan’s promise that he would not lead us into a war in Vietnam. Go figure!

Fifty years ago today marked the opening of the 1964-65 World Fair in New York. Robert Moses, serial builder and neighborhood destroyer, was the impresario of the event. He was motivated by a desire to overcome the negative feelings about the 1939-40 World Fair on the same Flushing Meadow site, which lost a sizeable chunk of taxpayer money. This Fair also lost money, although it drew over 51 million patrons.

Moses, who fought with everybody, tried to get sanctioning for the event from the Bureau of International Exhibitions based in Paris. He managed to piss-off everyone he came in contact with and, as only a few will remember, we had a Fair with neither France or the UK participating. There were, however, pavilions for Spain, Belgium and the Vatican. I remember sitting at a café table, savoring sherry from Jerez, and watching and listening to sultry flamenco dancers and classical guitarists. I remember trying something called a “Belgian Waffle” and ate fries with mayonnaise. Mostly, I remember waiting an hour on line to get my three minutes in front of Michelangelo’s La Pieta, on loan from the Vatican.

See also  The John Carlos Story: The Sports Moment That Changed the World

I was transported by Greyhound jitneys, took the Disney “It’s a Small World” ride, saw the model of the Saturn Rocket and walked through pavilions from countries all over the world. It was a great place to people-watch. As Joseph Tirella wrote in his essay in The New York Times this morning, “Fairgoers could sit by a fountain and quite literally watch the world go by.”

The legacy of the Fair endures in the ethnic make-up of Flushing and the surrounding areas. Neighborhoods of Colombian, Venezuelan, Salvadoran and Mexican immigrants stand side by side with clusters of Chinese, West Indian, African and Vietnamese New Americans. Where only Irish, Italians and Jews made their homes, today this portion of the Borough of Queens is the true melting pot of the city.

Thoughts of the spring of 1964 are, for me, bittersweet. They were my last few months of freedom and relative innocence. By August of that year I would take the Oath of Office in the army; the beginning of a trek that would take me to 13 months of armed combat in a far- off land. Springtime in Oklahoma, where I trained, and in South Vietnam, where I fought, was devoid of the beauty and wistfulness of this season in New York. No peonies full of ants in late May; no wisteria vine; no towering elms and oaks. I never saw a hydrangea of any color, never smelled a rose, and never heard a robin.

I came back in late 1967 to a country torn by strife over the war and polarized over the issue of race. I was tougher, bitterer and less open. It took me a long time to smell the flowers again. Today, I did.