Joel Smith, is the Assistant Strength Coach of Olympic Sports at the University of California, Berkeley.  His personal website at www.just-fly-sports.com.

Joel also wrote the controversial article 3 Reasons the Squat is NOT the Cornerstone of Strength Training for Sprinters (a recommended read) and 3 Ways to Optimize Your Sprint Strength Program. He is also the author of the new book Vertical Foundations.  Click here to learn more about the book.

To view all the articles by Joel Smith, click here. 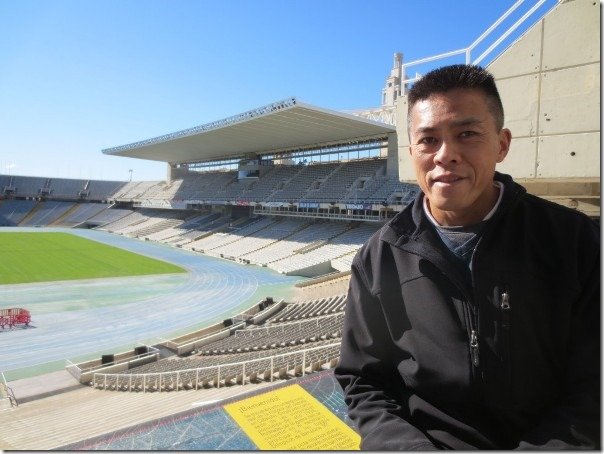 Jimson Lee at the Barcelona Olympic Stadium, site of the 1992 Summer Olympics

Last week, Joel interviewed me for his Blog.

My answer to Question 1 is here:

Believe it or not, when I trained with Dennis Barrett at McGill University from 1984-1993, the ONLY method I was aware of was the long to short.  Dennis had success when he was an athlete in the USA on a scholarship when he was competing, so he used his knowledge from the late 1970’s to his athletes from 1984 onwards.

Even our rival school, Sherbrooke University, was doing long to short under the guidance of Richard Crevier, and he had success with his sprinters.

It wasn’t until I moved out west (Vancouver, Canada) after I retired from open T&F where I met Mike Murray, the coach of Peter Ogilvie and Canada’s 4×100 relay coach at the time (92 & 96).  That was my first time hearing about short to long.  Then I attended a Charlie Francis seminar in 2002 and he re-enforced short to long as well.

Finally, when I started my Blog in 2007, I started researching more about training, and discovered Clyde Hart using long to short, or “very long” to short.

>> Click here for the rest of the interview and my answers!