Applications of Taping: Lymphatic to Pediatric

You are here: Home / Coaching / Applications of Taping: Lymphatic to Pediatric
28
SHARES
FacebookTwitter

This article was written by Dr. Kenzo Kase, a graduate of National College of Chiropractic, is the inventor and developer of the Kinesio Taping Method and Kinesio Tex Tape. He is president of the Kinesio Taping Association International and can be contacted with questions or comments via Kinesio USA (www.kinesiotaping.com).

This article was cross posted on www.dynamicchiropractic.com with permission.

Applications of Taping: Lymphatic to Pediatric

However, this use of taping in sports is merely the tip of the iceberg as to how it can be integrated into chiropractic treatment.

The underwater portion of the iceberg reveals a treatment for a wide patient base in which DCs can utilize taping for pediatrics, pain management, lymphatic/inflammation and proprioceptive positioning. For instance, it is hugely rewarding to be able to help young people with pain and health issues. Florida therapist Linda Shoenberger, LMT, CKTP, got into the taping partly because of issues with her son and his youth soccer teammates. “[S]everal of them were suffering from Osgood-Schlatter,” she recalls, noting that “Nothing really helps with that pain except resting, as it is a growth issue.” Shoenberger has been taping her son’s team for years since becoming certified in the taping method. The coach has credited her with a marked decrease in pain and soreness and fewer missed practices and games among the players.

Taping for edema is another value-added feature. The same rush of satisfaction Linda Shoenberger gets from treating young athletes may also be found when seeing pain, inflammation and bruising disappear visibly in the exact shape of the applied fan cut strips.

Elastic therapeutic taping also works on the surface continuously over a long period of therapy, affecting the epidermis, the dermis and the capillaries. It works with massage, chiropractic treatment, PT treatment, and myofascial type treatment; in fact they are all associated. Circulation of blood and other fluids is a key to total health. The size (number) and length of the capillary system is massive and runs between the epidermis and dermis as an extensive and effective cleaning system in the body. The function of the cleaning system in the organs is to clean the body by removing impurities. Damage to the capillary area may also cause internal bleeding.2 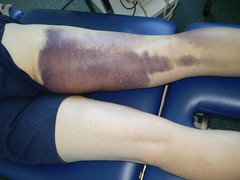 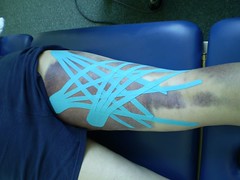 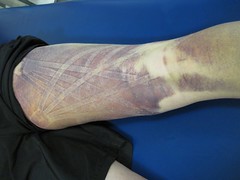 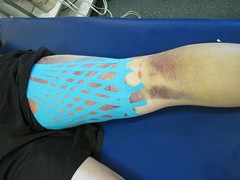 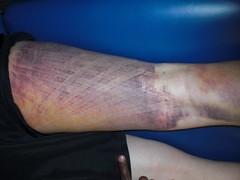 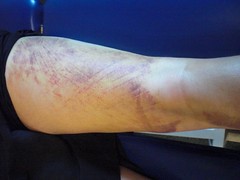 Mechanism of Action: The lymphatic correction with elastic therapeutic taping is used to reduce edema by directing fluid toward a less congested lymphatic pathway and lymph node. The elasticity and lifting effect of the tape decreases pressure, and may also create a massaging action during active motion. The effect of the taping on muscle is to normalize the lymphatics by allowing maximum contraction and relaxation of the muscle.

Edema and inflammation may occur when an increase in circulatory activity of the blood leaves the lymphatic system unable to keep pace. The cause may be trauma, infection, an autoimmune reaction such as rheumatoid arthritis, or excessive heat. Once inflammation occurs, it increases pressure on the touch receptors. The increased pressure in the superficial layers, and lack of skin movement, in turn may inhibit lymphatic receptors and increase edema.3

Research: Studies support the use of elastic therapeutic taping for lymphoedema. In a 2007 Polish study, researchers found that “assessment of the efficiency of an upper limb in women after mastectomy shows a 20-day cycle of improvement with the use of lymphatic applications of the [elastic therapeutic taping] method, [with considerable reduction of oedema lymphatic,] which increases range of motion and normalization of muscular tension, contributing to the increase of muscular strength.”

The study concluded, “Lymphatic applications accelerate lymphatic and venous microcirculation, and reduce the stasis of lymph in intercellular spaces. Decrease of oedema contributes to the improvement of movement range in all joints of an upper limb and normalization of muscular tension contributing to the increase of muscular strength.”4

A randomized, single-blinded, controlled 2009 study of 41 patients in Taiwan suggested elastic therapeutic tape “could replace the bandage in decongestive lymphatic therapy, and it could be an alternative choice for the breast-cancer-related lymphedema patient.”5 And Polish researchers studying 24 patients in 2009 found that “the application of [elastic therapeutic taping] in the study group produced a significantly faster reduction of the edema compared to standard lymphatic massage.”6

Application: The tape strip is applied using a fan cut. Leave about a 2 inch uncut position at the base. Initially, while becoming proficient in this taping technique, it may be easier to section the tape into four separate “tails.” As you become more comfortable and confident of your technique, you may see improved lymphatic drainage using a fan cut in five or six strips. Precut fan strips are now available.

Have the patient move the target area into a stretch position. For example, when taping the calf, the knee would be in extension and the ankle in dorsiflexion. Place the uncut base of the fan slightly above the lymph node to which lymph drainage is being directed. Apply the tails of the fan with paper off to very light tension over the area of edema. A second fan tape strip may be applied in a crisscross weave pattern across the area of the first taping.

Research: In 2006, a pilot study was conducted at the Rehabilitation Institute of Chicago. The purpose was to describe the use of elastic therapeutic taping for the upper extremity in enhancing functional motor skills in children admitted into an acute rehabilitation program. Fifteen children (10 females and five males; 4 to 16 years of age) receiving rehabilitation services at the institute participated in this study.

For 13 of the inpatients, this was the initial rehabilitation following an acquired disability, which included encephalitis, brain tumor, cerebral vascular accident, traumatic brain injury, and spinal cord injury. The Melbourne Assessment of Unilateral Upper Limb Function (Melbourne Assessment) was used to measure upper-limb functional change prior to use of elastic therapeutic tape. Immediately after application of the tape and three days after wearing tape, upper-limb function was compared using analysis of variance. The research found that “the improvement from pre- to post-taping was statistically significant, F(1, 14) = 18.9; p< .02.”

The Chicago team concluded: “These results suggest that [elastic therapeutic tape] may be associated with improvement in upper extremity control and function in the acute pediatric rehabilitation setting. The use of [tape] as an adjunct to treatment may assist with the goal-focused occupational therapy treatment during the child’s inpatient stay.”7

For children with neurological disorders such as CP, TBI and CVA, the ability to achieve full expansion of the open hand may be difficult due to increased tightness or spasticity of the wrist and fingers. This is because the digits may be dominated by marked flexion with a tightly fisted hand. Oftentimes the child will release an object by flexing the wrist which biomechanically will extend the fingers. This is often seen with children using a compensatory tenodesis grasp and release pattern.

It is important to relax and stretch the tightness at the thenar and hypothenar eminence. Applying various techniques such as neurodevelopmental treatment, myofascial release, joint mobilization, weight-bearing, etc., may inhibit the abnormal tone and assist with promoting better alignment of the wrist and hand.

A neutral or slightly extended wrist, with a balance between long finger flexors and finger extensors, will allow for stronger grip strength and functional prehension. It is important to evaluate the child’s basic grip, position of the wrist and the ability to relax the grip to adequately extend the fingers. Elastic therapeutic tape for active release will assist with the extension of the fingers; however, it will take time, practice and repetition.3 Use tape in a 2-inch fan cut and apply as follows:

Every day, health care professionals, patients and athletes are discovering new things about elastic therapeutic taping. On the research side, we work constantly to understand what works and why. It is clear that DCs all over the world have the training and creativity to take the healing sciences to the next level; elastic therapeutic taping can be a valuable asset for that progression.