Of course, the answer is yes if strong illegal tailwinds actually help sprinters.  But there is more to the story… 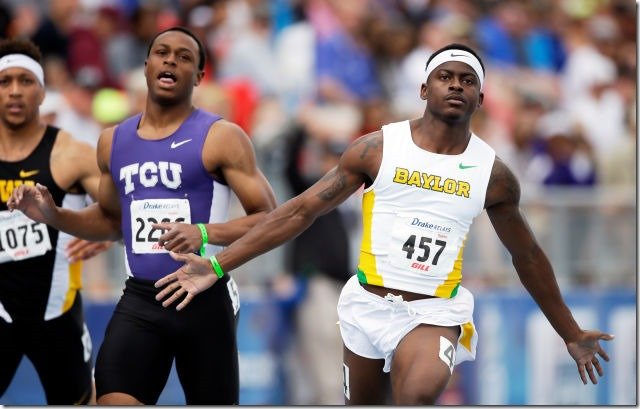 Or Tyson Gay’s 9.68 (+4.1 m/s) set at the 2008 USATF Olympic Trials with the fastest time ever recorded under windy “illegal” conditions.  Click here to see that race on YouTube.  (Little did we know Bolt would run 9.69 slowing down at the finish a few months later)

But the question is, does wind assistance really help?  Of course it does, like altitude, but it can hurt you too (more coming up).

And then there’s the 200m where the wind gauge only records the last 10 seconds once the first runner has entered the straightway!

If you run a PB in a +3.0 or +4.0 tailwind,  I think great, because YOUR BODY really ran that time.  It’s programmed in the muscle and neuro memory.  Now you just have to do it again next time, after a 10 day taper, of course.  Same goes for altitude conditions.

Your sprint mechanics must be solid!  Technically, you will be overstriding because you are covering ground at a faster rate with the same stride frequency.  This means each stride is actually longer than with no wind.

You have to go back to my article on overspeed training, which basically explains the braking effect.  There are several ways to train for overspeed training, such as towing with bungee cords, or wind tunnels, but I prefer a nice gentle slope of 1 or 2 degree grades on a grass surface with long spikes.  Bobsledders and Skeleton’ers are familiar with this type of training as they have to replicate it on the hill.

With overspeed training. you will overstride if you are not careful.  The result would be injuries, and that would be bad.  Take caution.

How Wind Assistance is Recorded

You can go to the article on Track and Field Rules and download the official handbook. The wind velocity is recorded from the smoke of the Starter’s gun to:

In the 200m event, the wind velocity is measured for a length of 10 seconds starting when the first athlete enters the straightway.

In the Long and Triple Jump, a period of 5 seconds for 40m from the take-off line in the Long Jump is used, and for 35m the Triple Jump. If an athlete runs less than 40m or 35m, then the wind velocity is measured from the time they start the approach run. 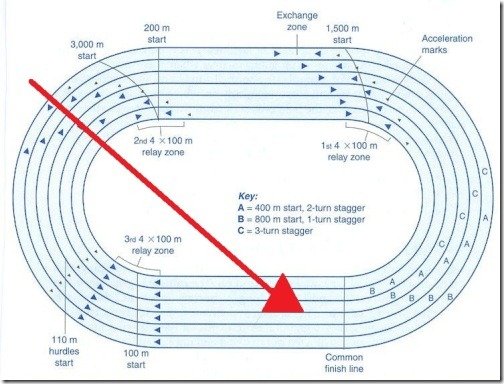 Sprinting is all about vectors.  The above diagram shows a tail-cross wind at 45 degree angle to the straightaway.

First, as far as race strategy goes, refer to my article on How to Race the 200m.

See also: The Effect of Wind on Curve Running

Even if the wind is a +3.0, you will have a headwind for the first 50m (Lane 1 gets it worse than lane 8 or 9).  Your speed is fairly slow compared to the later part of the race, so the wind should not matter too much.

The next 50 meters, where the wind isn’t even being recorded, is where the sprinter gets full benefit with a nice tailwind.

And finally for the 100m straightway, when the wind gauge operator starts the meter, you get the effects of a cross wind, which could show up as little as +1.9

As you can see, there’s a flaw to measuring wind for 200 meters, but take the PB and run if you can!

And finally, In the 400m, you want the wind in your face over the last 100m, because you are already slowing down. You might as well take advantage of the wind and get a fast opening 200m!  The 400 meter success is all about speed reserve, which I have covered at length on the Blog.