You are here: Home / Coaching / Top 14 Ways to Improve your Start – with or without Starting Blocks
206
SHARES
FacebookTwitter

If you are looking for articles and videos on the start, you’ve come to the right place.

This Blog is over 7 years old, so there is a wealth of information here.

I’ve covered (with a little help from some guest writers) topics ranging from the infamous toe drag, how to use blocks, getting out of the blocks, the Bud Winter Rocket Sprint Start, 2 point starts, 3 point starts, 4 point starts, falling starts, and asymmetrical hand positions.

So there they are in chronological order as they were published on the Blog:

A great video analysis by Coach Adarian Barr, using both voice over, as well as frame by frame analysis on Carmelita Jeter start and drive phase.  Not only do you see the good and the bad, but HOW TO correct it. 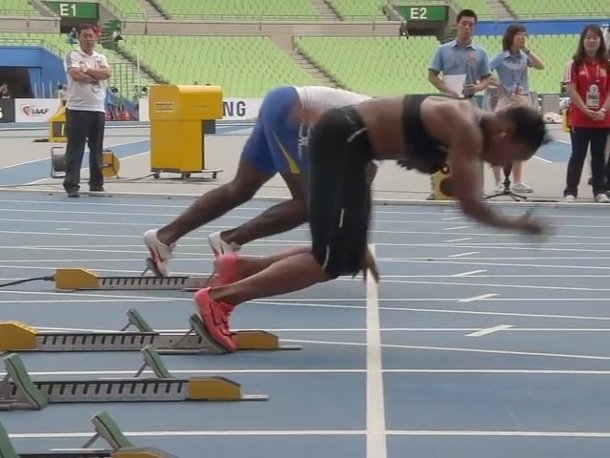 How to Do Different Starts… 2 Point, 3 Point, Falling Starts

Derek Hansen offers a great instruction video and DVD for sale on how to do various starts.  Highly recommended for coaches for all sports where you need a great start, which sets up the speed correctly.  It’s all about getting yourself in the right position

See also  Iwan Thomas on the Pressure of the Olympic Trials

I used this technique for years, because I was taught to move my left had (with a right rear block) upwards and forcefully at the crack of the gun.

So, by using an asymmetrical hand position, with the left hand closer to the line than my right hand, it works for me.

This is one of the highly controversial topics in the start.  Physics show it is better.  But it’s the stopwatch that counts!

Here are some great stills of shin angles and joint angles to show one of the best starters in the world, Asafa Powell.

In 1964, Bud Winter published the book The Rocket Sprint Start based on Germany’s Armin Hary 100 meter victory at the 1960 Olympic Games.

If you’ve seen the vintage footage, you will agree on two facts: (1) he was one of the fastest starters of all time, and (2) his pickup in the first 20 yards was amazing.

What did he do differently? Read on…

Back in my days competing at the indoor Dartmouth college track meets, we did not use blocks for the oval events (200m & 400m).  Why worry?  Alan Wells didn’t use blocks in his early years until it was mandatory for all events under 400m, and the advent of electronic sensors to detect false starts.

How to Use Starting Blocks: Case Study #1

Here I present and dissect a video.  If I had more time, I would do this for everyone!

See also  What is your Favorite NCAA Track and Field Moment?

Carl Lewis: First 3 Steps out of the Blocks

Some classic vintage footage from 1984.  Love him or hate him, Carl Lewis is (was) King.

Going back to the indoor Dartmouth college track meets, we never panicked when we could use starting Blocks.  If Asafa Powell doesn’t use them for his time trials, then we shouldn’t panic.  Just learn from him, or me

One of the original video footage of Usain Bolt using blocks, obtained with permission from Puma.

Valeri Borzov had one of the best techniques in the world during his prime.  Here, we look at his first 3 steps and see that he is doing right.