This is his 60th article.  Click here for his entire series. 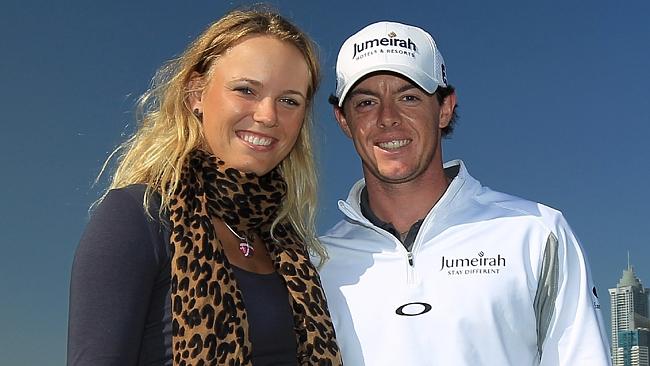 Rory McIlroy is a wonderful golfer. At age 24 has mastered the sport that befuddles, perplexes and exasperates most who attempt to play it. My good friend George likes to say one doesn’t play golf; one “commits” golf, as in a felony or misdemeanor. In any case, young Rory is ranked Number One in this gentlemanly endeavor where one calls the penalties on one’s self. He has won four Major tournaments [the last two, in a row] and has occupied the lofty pinnacle of the sport vacated by Tiger Woods.

Despite his Northern Irish charm, his self-effacing demeanor and his good manners, this year McIlroy has become the poster boy for ungentlemanly behavior. Words that come to mind include cad, lout, callow youth, puerile and insensitive.

In short, Rory, you’re an idiot!

And the reason you are an idiot is not just that you broke up your relationship with Caroline Wozniacki, but the infantile and insulting way you did it. Wozniacki is the Danish born former Number One ranked women’s tennis player. While never winning a Major, she is a former Olympic Gold Medalist, having beaten Kim Clijsters in the final.

See also  Your Behavior Matters, On and Off the Track

Rory and Caroline courted one another in a global romance that delighted their respective fans. From 2010 to early 2014 they were seen as the modern day prince and princess of sport. They were dutiful fans at each other’s competition, and their faces graced the celebrity platforms of all media. They were both accomplished, cute and exuded star magnetism. They truly were sports’ answer to Brad and Angelina, without the sordid run-up to the relationship. On New Year’s Eve, 2013, McIlroy proposed in Sydney and Caroline accepted.

What caused the lad to get cold feet in four months only this son of County Down really knows? But, on May 21st, he called the wedding off. Called it off while the formal invitations were in the mail! His public statement offers little explanation.

“The problem is mine. The wedding invitations issued at the weekend made me realise I wasn’t ready for all marriage entails. I wish Caroline all the happiness she deserves and thank her for the great times we’ve had.”

Say, what? That’s colder than a stepmother’s kiss.

There is no hint that Caroline had a rival for Rory’s affection. Nor is there any hint that he may have a skeleton or two in his closet that he was unwilling to reveal. Bad judgment and worse manners is all it is. McIlroy travels from tournament to tournament with a gang of childhood chums. They do “guy” things together. My theory is that these sycophants in his Celtic posse realized they were about to lose their pack leader and financier of their reveries. They probably leaned on him and convinced him that he was too young to be tied down.

F. Scott Fitzgerald controversially said, “There are no Second Acts in American lives” [not, as many believe, in The Great Gatsby, but rather in the notes to The Last Tycoon]. But, these youngsters are not American; they are Irish and Danish. And, they both have mustered muscular Second Acts.

Rory immersed himself in his sport and had an incredible summer. When he won the British Open in Liverpool he got booed for admitting at the post match presser that he rooted for ManU. Ironically, Caroline is a devoted fan of Liverpool and frequently wears the jersey given to her by Captain Frank Garrard. McIlroy has taken on all comers with a surgeon’s precision and is clearly at the top of his game. But, if you look carefully at his eyes you can see sadness. There is something missing. He does not look happy.

Caroline, on the other hand, took some time to grieve and to deal with the humiliation. On the same weekend that McIlroy won the Open, she won a small tournament in Istanbul. She began to run distances. Those of us who have followed a similar path know the healing qualities of running. The rhythm of the steps and breathing and the solitary communion with one’s soul are balm for the hurts exacted by the cruelties of life.

She emerged in New York last week for the incredible fortnight of the US Open. New Yorkers are far less hard-bitten than their reputation. They are always there to embrace an underdog. When Wozniacki announced she would return to New York in two months to run in the New York City Marathon, she made a pre-emptive move to become the darling of the tournament. And, on Sunday, she made it happen.

In a fourth round match, at Ashe Stadium, she took on the Russian Ice Queen, Maria Sharapova. Dressed in a pretty peach dress and soft pink shoes, Wozniacki outlasted the former champion in three stamina sapping sets. And the crowd adopted her. When the 10th seeded Dane broke the Russian at love to go 3-1 in the final set, she got a standing ovation and waved her arms in glee. Second Act, indeed!

Prince has a great lyric in his song, Kiss: “You don’t have to be rich to be my girl; you don’t have to be cool to rule my world”. But, Rory, this girl is both rich and cool. And she’s pretty and smart and charming and a champion. Young man, this package doesn’t get delivered very frequently by FedEx.