This is his 61st article.  Click here for his entire series. 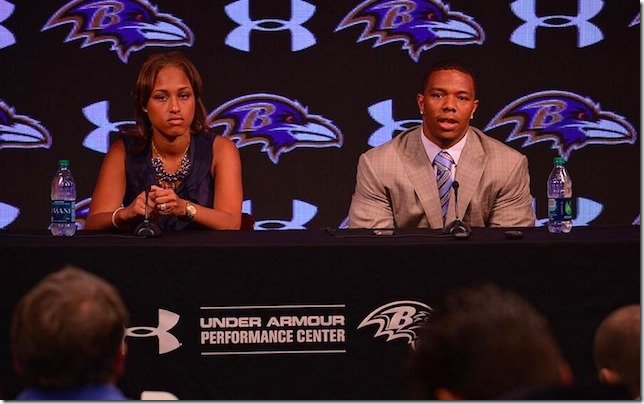 There is no other way to describe Ray Rice or other men of his ilk. Cowards! Men who spend their days pumping iron, exhibiting their musculature, preening their maleness and exuding strength while spending their evenings punching out women and terrorizing them with the threat of violence. Cowards! Men, of any size, shape, age, fitness, race or creed, who physically abuse our sisters, mothers, daughters and friends. Cowards! You may call this domestic abuse; I call it cowardice.

The war for gender equality has had many battles and skirmishes. There was the fight to win the right to vote. The on-going struggle for justice in the workplace. The quest to be accommodated, publicly and privately, in bastions of economic and social power, such as country clubs, educational institutions, pubs, and societies. Equal treatment in the Armed Services. The rights to compete against men in forums like Little League. All of these have been important but not nearly as important as this last battle: the fight to make women be and feel safe.

The days for hiding this sick little secret are over. Joe Louis, the former heavyweight champion, used to say to his opponents, “You can run, but you can’t hide”. Well, the same can now be said of the cowards. All our actions, public and private, are now subject to an incredible level of electronic scrutiny. I took my daily 5 mile walk this morning in Manhattan and my “constitutional” was probably observed by cameras numbering in the hundreds. Everyone I know has an image recording device in his or her pocket or purse.

And, we, and by we I mean men, have to become the spokespersons for this new paradigm. I am sorry to say that up till now we have been alerted to this social and human curse by advocates who have been, for the most part, female. Unfortunately, as a consequence of whom they are and how they look [many of them dressed like they just came from an LGBT rally], they have been largely ineffective in getting the message across. I applaud their passion for justice but it is time for new leadership. This is a male issue, perpetrated by males, and we, men, have to lead the fight to abolish this sick behavior.

There are a lot of villains in this Ray Rice incident. The National Football League [NFL] has been absolutely tone deaf in dealing with this issue. Under the leadership of the late Commissioner Pete Roselle, a former Los Angeles Rams flack, the league established a reputation for nuanced public relations. It has become a sports juggernaut by astute message control and disciplined dispensation of information. Today, that reputation is in shambles. It takes them months to investigate the incident; they then give Rice a two-game suspension slap on the wrist; they follow with a strong post-Rice domestic violence policy; then this week they change the sanction to an indefinite suspension. Their pronouncements and actions are all reactive. They seem to wait for the public and pundits to weigh in, and then they choose a path of action. Roselle, wherever he is, is chain-smoking and muttering under his breath.

Last month, a similar elevator security camera in a Vancouver hotel, caught a guy repeatedly kicking his Doberman pinscher puppy. The guy happened to be Des Hague, the CEO of Centerplate, an international catering and concessions company. The video went viral and within seven days Hague was fired by his board. It has now taken seven months for the Ravens to fire Ray Rice. We treat our dogs better than women when it comes to physical violence.

The Mafia has had its omerta, a culture of silence; police departments have their blue wall. For generations the cowards that have dispensed their insecure hostilities upon vulnerable women have benefitted from a male culture that protects them. Facial bruising on women has been ignored, tolerated, and in some despicable instances, lauded. Misogynistic lyrics in rap music have been accepted as “art” and have created profits for writers, performers and music companies. Insulting depictions of women as “bitches” and “hos” are commonplace and, I believe, are a gateway to physical abuse.

I pledge, from this day forward, I will do my part. I will stop buying the music and purge existing songs that extoll violence from my platforms. I will speak publicly about my abhorrence of the actions of the cowards. I will report anyone I believe is participating in violence towards women. And, as a sports fan, I will withdraw my adulation for anyone with a hint of this behavior in his background.

This has to stop!