Michelle Thomas and the Winning Mindset: Her Story

You are here: Home / Coaching / Michelle Thomas and the Winning Mindset: Her Story
75
SHARES
FacebookTwitter

This article was written by Stevie Gee, a personal trainer, fitness coach and a GB Master Athlete at 400m.

Click here to read all of Stevie Gee’s past articles.  As a primer, read Injury Prevention and Rehabilitation – Part One

Michelle Thomas and the Winning Mindset:  Her Story

In the previous article, The Winning Mindset, Part 1 and Part 2, we focused on Sports Psychology and Optimum Sports Performance, and profiled GB Master, Rick Beardsell’s M35 successful campaign on becoming 2014 World Indoor 400m Champion. Despite having to battle through serious illness and injury setbacks along the way, Rick demonstrated that what the mind perceives the body can achieve. The basic premise of that story was simple: fortune favours the brave.

In this article, we turn our attention to another amazing Athlete, W40 GB Master, Michelle Thomas, whom many believe has the capability of being crowned as a future European and World Masters Champion in either the 100m, 200m or 400m. (Individual and Relay). Just Like Rick, Michelle has had to contend with illness and injury setbacks, which have threatened to permanently curtail her time in Athletics. However, as you are about to discover, Michelle too has consistently demonstrated the same Winning Mindset and Physical attributes that goes into making a Great Champion and an Ambassador of hope and inspiration to others, both in sport and life.

This is her story….

Michelle Thomas took up Athletics as a teenager while attending Reside Middle School in the UK. Having participated in several school sports, including swimming galas and netball tournaments, it was only when Michelle turned her attention to competing in the school sports day sprint events did her talent for running fast get recognised, particularly when she managed to beat her teacher in a 200m race.

She was guided and encouraged by her teacher and friends to participate in the Hereford and Worchester Council District Sports Championships, in the short sprints over 100m and 200m, where she managed to convincingly win and set new track records. Those early victories ignited Michelle’s passion for Athletics and gave her the confidence, motivation and commitment to pursue her dream of competing and medalling for GB as an International Athlete on the World stage: A Dream that eventually became a reality, with the help of her coaches Ron Rodden and former legendary Sprint Sensation, Linford Christie. 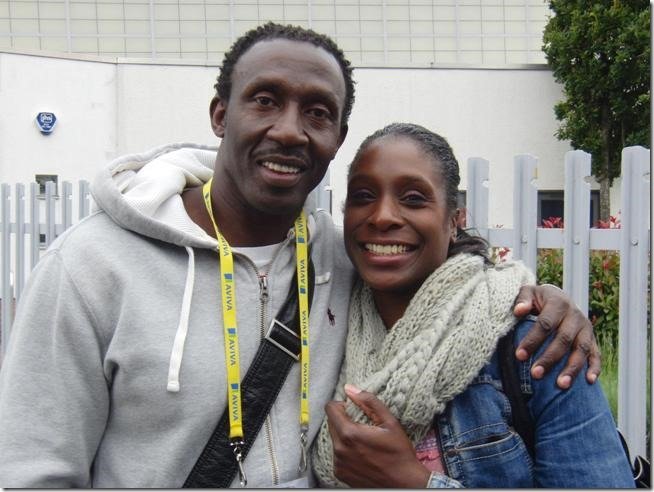 Michelle began seriously competing back in 1990 as a 19 year old , clocking an indoor 7.61 secs over 60 metres at Cosford. A year later, she produced an 18.05 sec clocking over 150 metres at Birmingham, demonstrating early potential as a future 200/400 metre specialist. But It wasn’t until 1997 that she began to emerge as a formidable force over 400 metres, both individually as a brilliant 4x400m relay runner, clocking an impressive L3 51.7 secs for GB at a late August meeting in Munich, Germany as well as 23.98 secs clocking, a week later, over 200 metres in Catania, Spain.

Going into 1998, Michelle was introduced to International 100m/200m Sprint Champion, Linford Christie and his training squad, who began to help Michelle improve her speed and speed endurance, strengthening her strengths and ironing out her weaknesses over the winter.

“Back then, I was fortunate to work with great athletes and receive excellent coaching from Linford. His relentless dedication & support assisted me to perform to my life time best,” she said.

Michelle managed to lower her 100metres to 11.89 secs and consequently produce a new personal best clocking of 52.48 secs for 400 metres at a July meeting at Budapest, Hungary in 1999.

Michelle also proved to be strong over 800 metres, a few years later, coming 4th in the British AAA’s Championships, in Birmingham in 2001 with a 2:09.45 clocking. In 2005, Michelle also managed to successfully compete for her Club, Birchfield Harriers over the 400 metres Hurdles, with a personal best clocking of 58.77 secs.

Some of Michelle’s other Lifetime Athletic Achievements Include: 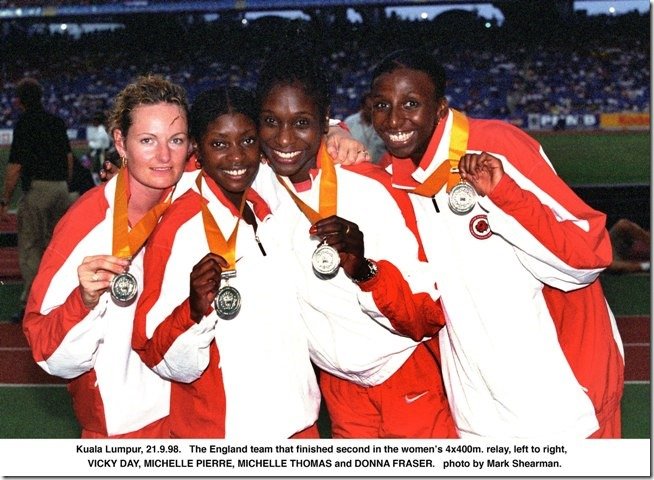 Michelle continued her Athletic pursuits, this time as a GB Master, beginning back in 2007 until present. During this time she has ventured out over distances, ranging from 60 metres to the 400metres.

Michelle began training with Ron Rodden in 2010 when she came to London for work purposes.

“Ron put me through my paces and the training was very challenging for me. Ron takes no prisoners or fools gladly! Therefore I made sure I did the training which he prescribed. It was tough, but I believe in his methods, which have never failed me. I enjoy working with Ron and Linford, as they always prepare you to run well when it matters.” 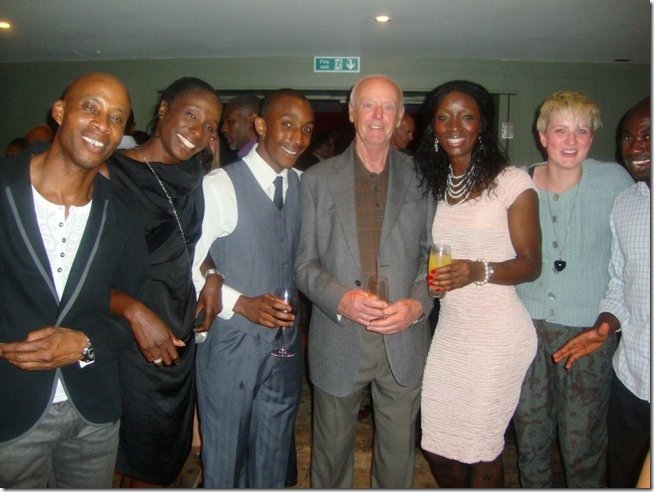 Michelle graduated with a BSC in Sports Coaching from Wolverhampton University in 2008 as well as further graduating in 2011 with an MSC in Sports Science. As a College Teacher, Michelle has successfully helped countless students along their career paths by obtaining Diplomas in Sports Science to the highest level.

As a mother of two, Michelle has carefully managed to balance her work life, family life and athletic training. As a Masters Athlete she has managed to lift several British titles over 60 metres, 100 metres, 200metres, remain highly ranked as one of the top performers in the UK.

In January 2014, Michelle demonstrated her true strength of character, recovering from an operation to remove benign tumours above her womb and then competing two months later in March, over 60 metres, at the British Masters Indoor Championships, earning a silver medal.

Unfortunately late in March, Michelle tore one of her calf muscles and had to receive six weeks treatment- interrupting her training preparation for the outdoor season. In July, she was struck again with an injury, this time sustaining a plantar fascia flare up attributed to her earlier calf injury. Her competitive season wasn’t looking promising, but Michelle persevered with what minimal training she could accomplish, to eventually medal at the British Masters Championships in August in both the 100m (Silver) and 200m (Gold) with times of 13.11 and 27.22 secs respectively.

See also  The Pursuit of Happiness and Olympic Medals

“I enjoyed competing at BMAF. I was asleep in the blocks 100m and ran 13.11 into a headwind, but it was a good result considering that my training was set back following my plantar fascia injury 10 days prior to the championships.

There were some terrible conditions with heavy rain in the 200m. I felt slightly disappointed being put into a B final as I was looking forward to compete against the very best masters athletes for my age . Nonetheless I ran the fastest time overall to win the 2014 200m. I am pleased with the result.”

It was in late August, in the 2014 European Masters Athletic Championships held in Izmir, Turkey, that Michelle managed to get into both the 100metres and 200metres finals, a remarkable feat, considering a year hampered with illness and injuries, earning both a 4thand 6th place, with a seasons best of 13 .0 seconds to be only inched out of 3rd place (12.95 secs). 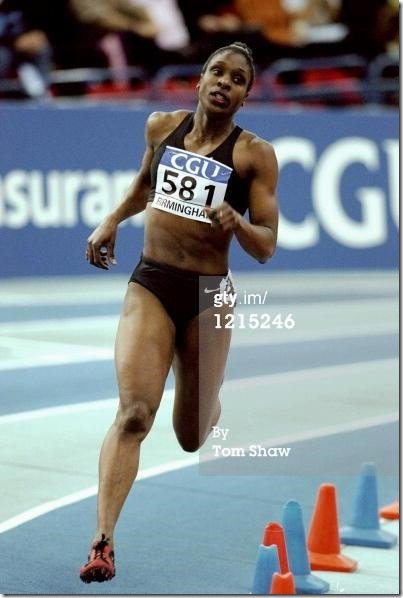 “Beyond Izmir, I will invest time into my training, and get fit for the indoors. Poland will be in the plan provided I am able to get time off work to represent my country. I hope to improve my training and not get injured, the idea is to train smart!! I feel that I am not a particularly good at training, and perform so much better in competition. This may mean that I will need to perform better in training, and I am prepared to do this if it is in my best interest to do so and helps me to improve my performances. I will be looking to compete in the World Master in Lyon in the sprints and again aim to put in a solid performance there.”

“Find your event by trying out different ones in the first instance. You will soon realise exactly what you are good at. Find a good coach, who can work with you. Do not turn up late for your sessions!

Trust your coaches advice, commit yourself to the training, train hard and the performances will come. Athletics is an individual sport so the main focus is on you. Finally, enjoy the sport.”

How Michelle got Mentally Fit 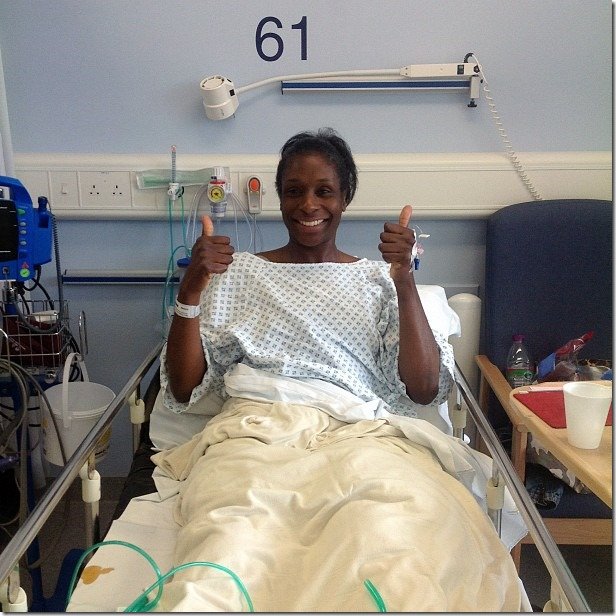 “I have experienced many setbacks and life-changing events. My mentality is now nothing fazes me anymore since I have been through so much. I take each day in my stride. I put each injury into perspective, and simply find ways to work myself back to fitness. I am very self-motivated and my autonomous nature enables me to work harder when I am injured and get on with the work. The worst injury was with the knee torn meniscus and chondroplasty surgery. I have accepted that I am not able to perform as I used to. Therefore I have lowered my expectation and just enjoy each race and competition. I do not worry so much when I get the odd hamstring of calf strain since I know that larger muscles repair easily and I am committed to the rehab. Recently, I have been working with sport psychologist Adrian Peck who helps me with my self-confidence and improved focus and motivation. I have some really great friends who have supported me through difficult times and they have kept me going strong. My son 18 and daughter 11 have also been very supportive throughout my athletic career I am not the sort of person to wallow in sorrow and instead soldier on with it. I continue to believe in myself and enjoy the sport.”

“There is a relaxed atmosphere as a master’s athlete. The differences in age groups promote fair play; you will get to know your competitors who are very friendly. You have to self-fund your athletics including international events and buy your own athletics kit- unlike mainstream athletics where everything excluding entry fees to competitions is paid for. Due to the nature of my injuries, I have lowered my expectation and cannot compete at the level which I used to be at. I simply get on with the events, and enjoy each race. There is strong competition in the age group and it is very competitive, yet I am really enjoying the competition.”

Supplements-Multi-vitamins and protein, and magnesium with calcium supplement.

Those of us who have seen Michelle’s brilliant performances this year unanimously agree that, fully fit, and without any injury problems over the coming months, she has the ability to emerge as a World Beater in 2015.

With expert coaching from both Linford Christie and Ron Rodden, few doubt that, or the truth in these simple mantras:

Your need to achieve must outweigh your fears and doubts

Stevie Gee is a personal trainer, fitness coach and a GB Master Athlete at 400m. He competed for Northern Ireland in the early 1990s, and aims to run at the European Vets Athletic Championships, next year’s world masters championships in Lyon M45 over 400m