You see, I was there, even though I was rooting for John Walker.

Actually, I was rooting for the Kenyans who boycotted the that Olympics.

Then 151 days later, Ivo Van Damme was tragically killed in a car crash.

To his honour, they names the Belgium Diamond League meet is named after him, and rightfully so.

A reader asked OlympStats, “What is the shortest or longest time an Olympian has been able to enjoy their Olympic medal prior to their death?”

The answer is 45 athletes have died within one year of winning their final Olympic medal.  Click here for the full list. 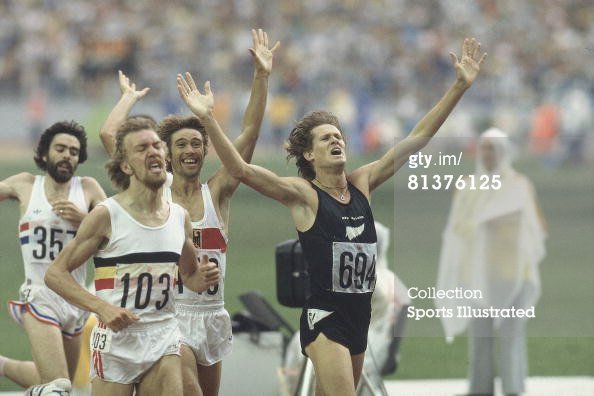 To An Athlete Dying Young

“To An Athlete Dying Young” is a poem in A.E. Housman’s A Shropshire Lad from 1896.  I remember reading this in high school and it made a big impact on me.   The story is about a young man at the height of his physical glory, and the fall from grace.  Sadly, the interpretation of the story shows it could be better being dead than alive.

The time you won your town the race,
We chaired you through the market-place;
Man and boy stood cheering by,
And home we brought you shoulder-high.

To-day, the road all runners come,
Shoulder-high we bring you home,
And set you at your threshold down,
Townsman of a stiller town.

Smart lad, to slip betimes away
From fields where glory does not stay
And early though the laurel grows
It withers quicker than the rose.

See also  Glen Mills on Tall Sprinters having an Advantage

Eyes the shady night has shut
Cannot see the record cut,
And silence sounds no worse than cheers
After earth has stopped the ears:

Now you will not swell the rout
Of lads that wore their honours out,
Runners whom renown outran
And the name died before the man.

So set, before its echoes fade,
The fleet foot on the sill of shade,
And hold to the low lintel up
The still-defended challenge-cup.

And round that early-laurelled head
Will flock to gaze the strengthless dead,
And find unwithered on its curls
The garland briefer than a girls.