This is his 65th article.  Click here for his entire series.

I have been a fan of Notre Dame Football since the age of 8. There are two reasons for this. First, the Dominican nuns in the parochial school I attended let it be known that we had an obligation, as devout practicing Catholics, to root for victory for Our Lady on fall weekends. Late on autumn Fridays they would lead us in prayer that we would vanquish the heathen hordes we would be opposing the next day. Honestly!

The second reason was that I worshipped a running back from our local high-school, Montclair High, whose name was Aubrey Lewis. Lewis was a high school All-American who scored 49 touchdowns and ran for over 4,500 yards. He received over 200 scholarship offers but chose Notre Dame, where he starred in football and was the captain of the track team [Lewis was the first black to captain a sport team at ND]. As a senior, he was a member of the team that broke Oklahoma’s 47 game winning streak. After graduation he became one of the two first black men to graduate as agents from the FBI Academy. He died of heart disease in 2001 at the age of 66.

This coming Saturday night, the Fighting Irish, currently ranked number 5 in the nation, will face the Seminoles of Florida State University, ranked number 2. This has become one of the more highly hyped games of the season. Prevailing sentiment indicates that the winner will probably wind up as one of the four finalists in the new Championship Playoffs while the loser is doomed to an obscure future competing in the Tootsie Roll Bowl in some second-class southern city. The “wise-guys” in Vegas have established Florida State as a 12 point favorite.

You would think this contest represents college sports at its finest. These are two bastions of higher learning who publicly wear their academic cred on their sleeves. Notre Dame boasts of its position as a marketplace of critical thought and scholarship. And, FSU has advertised its goal to become one of the top ten researched-based universities in the world. The half-time commercials for these institutions will show-off their respective dreamy campuses and brag about how their students are changing the world. Enough to bring a lump to your throat!

But, not so fast.

Let’s ignore, for a second, that FSU insists on keeping a nickname and a mascot that has become socially indefensible. The only reason that they have not suffered the slings and arrows [bad choice of words!] of critics in the same manner as the NFL Washington Redskins is that they have paid off certain leaders of the Seminole Indian tribe. Or let’s not belabor the fact that they have just selected as their next president a hack politician, former legislator, over some superbly qualified scholars. 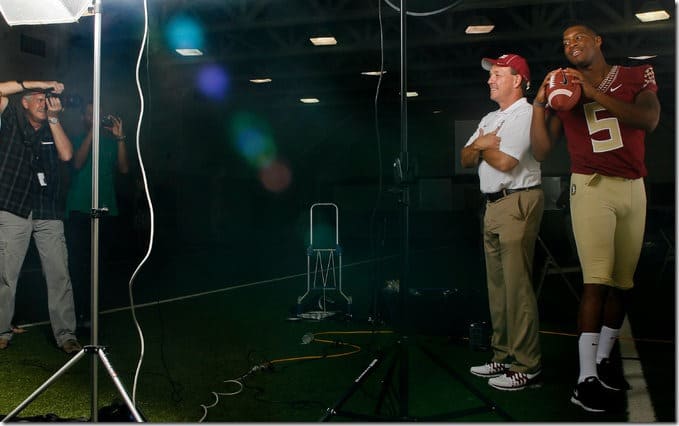 Last Sunday, The New York Times, in a front page story, chronicled the anti-social and illegal antics of many members of the FSU football squad. Their quarterback and Heisman Trophy incumbent, Jameis Winston, has become a poster boy for petulance, arrogance and entitlement. He has been accused of sexual assault, theft and inappropriate public comments. His coach, the irrepressible “Jimbo” Fisher, has stated unequivocally, “We believe in him 100%.” Without going into the advantage a coach named “Jimbo” has in garnering the support of the “bubbas” in Tallahassee, it seems Fisher has become less of a disciplinarian and more of an enabler.

Other members of the team have been no slouches in the category of bad behavior. The Times reported on motor scooter thefts, domestic violence accusations and full-out gun fights by team members using BB air guns.

The papist squad from South Bend fares no better.

The Irish’s own quarterback, Everett Golson, is returning after having been suspended for a year for “an academic infraction and one other reason”. Golson, himself, admitted to Sports Illustrated that he had cheated on a test. Five other members of the 2014 squad, including several defensive starters, are currently suspended pending an investigation into academic improprieties.

Their coach, the pugnacious Brian Kelley, is a potty-mouthed lout who is publicly abusive towards his players during the heat of a game. Lip reading his rants on the sidelines is embarrassing.

So, what we will witness this weekend is the playing out of the movie “Bad, and Badder”. The altruism is gone from big-time college athletics. Permissiveness, for the sake of the almighty win, has carried the day. And, we should not be surprised that the schools cannot control the teams.

Big-time college football teams are no more than mercenaries fighting for their sponsors. And, throughout history, those who employ mercenaries have had an impossible chore in policing their conduct. Just ask George V about his ability to control the Hessians in his little war with the colonies. Just ask George W. Bush about his problems controlling the behavior of the mercs of Blackwater.