Why I Ditched my Weight Belt and Wrist Straps

You are here: Home / Track & Field / Why I Ditched my Weight Belt and Wrist Straps
1
SHARES
FacebookTwitter

During my weight training days at McGill, I remember a lot of lifters were using wrist straps and weight belts, including myself.

The weight belt was good for the vanity – it tightened your waist and tucked in your beer belly, plus it inflated your chest, hence the inverted Jack Lalanne triangle appearance.  You know what I’m talking about, the guys with the 44 inch chest and 30 inch waist.  Of course, these same guys had skinny chicken legs, so they would wear Hawaiian “Jam” pants to hide them.

Today, if you walk into a Gold’s Gym or World Gym, you might see that trend.

About 15 years ago, I ditched the wrist straps and weight belt, in favour of chalk when performing my cleans and dead lifts.  I would bring my own little rock climbing bag with a block of chalk. The staff at Gold’s Gym hated me when I showed up because I reportedly left a “mess”.  I was thinking of bringing my portable hand vacuum cleaner just to shut them up.

which you can buy at Amazon if your Gym has a no-chalk policy.  Thumbs down if they do.

Don’t get me wrong, the straps certainly helped my cleans.  In fact, I can lift more with straps, just like I can shoot a better round in golf with a golf cart instead of walking carrying my bag.

Why the shift in mentality? 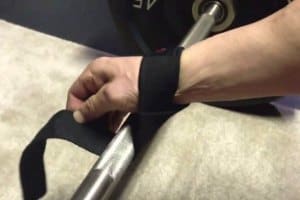 There are two types of wrist straps, one with the loop at the end, and the other is just a long piece of material.

I prefer the single strap.  To use it, hang the strap over your wrist in the middle, then lower your wrist and grab the bar. From there, use your fingers to grab the two straps and loop it over the bar towards the center.  It takes a bit of practice, using your thumb to assist to do this single handedly (no pun intended). 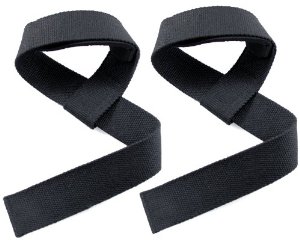 For straps with the loop, make a loop with the strap, put your wrist through the loop, and use the same procedure as above, but only grab and roll the single hanging strap.

Make sure in both cases you don’t have a fold or kink in the strap.

On a 1 RM (one rep max) or double (2 reps), there may not be any benefit, but on higher reps where fatigue sets in, I can see straps having an advantage.

There’s an old saying, “If you can’t lift it, then don’t do it”.  You are adding more stress to your shoulder and elbow joints with assisted lifting.  You are better off to work on your own grip strength first for reasons I’ll get into later.

I am also told your grip gets weaker as you become more dependent on them.  I disagree with the weaker part, as your weight numbers will rise.  But I certainly agree with the dependency.

In the end, psychologically you simply lift more because of the assisted lifting.

There are two types, one regular about 4 inches (10 cm) high and the “high back” version about 6-8 inches high.

Traditionally it was used to keep the back and spine straight and stable, along with a “false sense of security” giving an illusion of safety.

But some fitness trainer claimed it was better to work our natural Abs and core and obliques..  The fitness ad sports industry went through a whole Abs and core crazy not too long ago, with everything from swiss balls, balance boards and bosu balls..  I think the craze is still going on!

As I got older, I was worried the weight belt could give me a hernia if it was too tight.

Again, the old saying of “If you can’t lift it, then don’t do it” applies here.

On Chalk, Gloves and yes, even Sponges

I have since ditched the weight belt, and I still own a pair of gloves, but I use those mostly for chin ups or pull ups.

However, if there is one piece of equipment I can’t live without, it’s my chalk for my cleans and deadlifts.

Yes, the same stuff you write on blackboards while in school, and I’m not a shot putter. Or gymnast.

I simply buy a block of chalk from any Rock Climbing store like Mountain Equipment Coop in Canada, Northface, REI, etc. and store it a plastic container with a lid.  You can even buy a cute matching rock climbing bag.

Just apply it to the areas of your hands where you feel “hot spots” when lifting.

Unless I am at a University weight room with proper lifting platforms, I try not to be too messy, but I can see the gym staff give me an evil eye sometimes.  Especially in posh Hotel gyms where I am forced to workout while travelling.  I have considered brining my own mini vacuum cleaner or “dust buster” just to shut them up.

See also  Inside the Training with HSI - Part 1

The rule is, if you have free weights, expect a few sprinkles of chalk dust here and there.  It’s part of the game, unless you have an allergy to chalk.  And that would be bad.

I’ve seen people use sponges instead of weight gloves.  These are super cheap, and you can add a touch of water when they harden and dry up.

Just choose one that’s not so thick, unless you have very large hands.

But whether you use chalk, straps, gloves or sponges, if you weight train regularly, you will build up resistance over time and get some callouses along the way.  It’s part of the sport.