microStretching is a recovery-regeneration technique aimed at diminishing inflammation and its effects on soft tissue. In turn, this gentle stretching process re-establishes the range of motion (ROM) lost about a joint(s) in response to injury with the related compensation shifts. microStretching influences the neural, hormonal and endocrine systems which are known to influence the physical, mental and emotional states of the individual.

In order to gain a better appreciation of the technique, it is important that we review its history. How the obstacles, the numerous trials and perceptions have led to the development of the concept(s) presently defining microStretching. 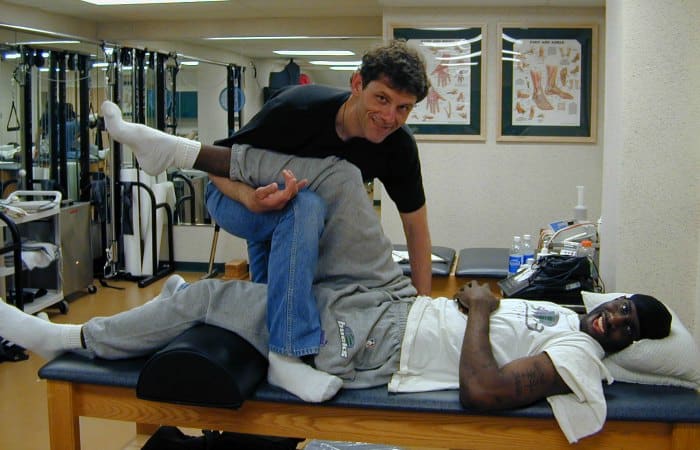 Insights to the Development of the Technique

On January 25th, 1989 while training with my cycling coach I was struck by a car in Stanley Park, in Vancouver British Columbia Canada. The car ran a stop sign striking me on the left side as I was in the middle of a left hand turn. As my bicycle was being struck, this resulted in me being spun resulting in me severely hitting the edge of a sidewalk curb with my helmet. The however, I was knocked out and was informed by my coach that I remained motionless for several minutes. Regaining consciousness, I stood up quickly whereupon my coach shouted that I needed to remain motionless until the ambulance arrived. While lying down I remember experiencing excruciating pain in my neck with a sensation of pins and needles emanating down both my arms, more on the left than the right. I was placed on a spinal board with my neck immobilized and thus began the long road to recovery. The final outcome was surgery in 1992 resulting in a spinal fusion at C5 – C6 of my neck, and a scar underneath my left eye, as well as a lifelong condition known as traumatic brain injury (tbi) and a thyroid condition. Traumatic brain injury results in the inability to produce a lot of serotonin.

That fateful night on January 25th 1989 taught me three important lessons regarding injury and healing; the involvement and interplay of the physical, mental and emotional components of injury. In turn I gained a better understanding of pain.

Excruciating pain was my daily existence and trying to find means to avoid it was foremost on my mind. A month after my injury I began treatments at a physiotherapy clinic. During my treatments, I was subjected to more pain followed by the copious ingestion of anti-inflammatories (i.e. Voltaren, ibuprofen etc). Similar to everybody I bought into the notion that “no pain is no gain”. The belief that in order to get better one needed to subject themselves to more pain and subsequently more inflammation.

One day during a “traction” session for my neck, I began to question this dogma realizing that pain was in essence the body’s response in order to avoid pain to prevent further injury. This view was to become one of the main tenets of the microStretching® technique. In fact, this notion is further supported by the definition of pain as set out by the International Association for the Study of Pain (IASP) (www.iasp-pain.org):

PAIN is “an unpleasant sensory and emotional experience associated with actual or potential tissue damage, or described in terms of such damage“.

So why create pain?

Pain and the Nervous System

The neural system of the body is comprised of two sub-systems the somatic (voluntary) and the autonomic (involuntary) (ANS). The somatic is mainly under conscious control; your thought can move a body part. The ANS is controlled by the subconscious, you do not tell your lungs when to breath or your heart when to beat. However, there are some who after years of training have managed to control the ANS that with a thought one is able to slow down both their heart and breathing rate (interesting how thought transcends the conscious and subconscious?).

The ANS itself is further divided into two systems; the sympathetic nervous system (SNS) and the parasympathetic nervous system (PNS). The SNS is stimulated during flight, fright, or fright and is also stimulated by pain! Therefore, I find it very interesting that therapists subscribe to a concept that has been adopted by the body to avoid an adverse stimulant, one that can cause tissue damage. The PNS is designed to relax the body.

Another way to view both the SNS and PNS is that the SNS is catabolic while the PNS is anabolic in nature. The SNS breaks down the body and is the main system stimulated during training and competition. In short it is born from trauma, while the PNS builds up. I further define the SNS as the great teacher for when stimulated it teaches us to avoid a painful stimulant (both physical and mental). You only need to experience the hot plate of a stove once to avoid it again. The PNS is the great healer. Meditation and its associated euphoria has us returning to this practice again for it helps to calm the mind and regenerate the body.

Conclusion: If pain stimulates the body to avoid pain, why should therapy stimulate such a system?

Read how microStretching was used in the Professional Sports (NBA, NHL, MLS) for Recovery and Regeneration on StrengthPowerSpeed.com.

The “Pain System” is a very complex integrated process; it is the interplay of various components involving the neural, hormonal and endocrine pathways providing a continuous processing of the relationship of the individual to himself and their environment. Each component influences and is influenced by inflammation and the inflammatory response. Hence it is my belief that the inflammatory system represents the prime relationship between the organism and its environment. A relationship defined by the internal and external milieu of the organism, a relationship determining the behavior to an external stimulus. A stimulus that is responsible for the adjustment of the internal environment in response to the external.

[Tweet “If pain stimulates the body to avoid pain, why should therapy stimulate such a system?”]

The inflammatory response is responsible for the plethora of physical, mental and emotional responses to pain. It is important to note that these responses are not all negative. The proper manipulation of the parameters of training; intensity, duration and frequency (I, D, F) represent a controlled traumatic experience referred to as training. How we moderate these parameters in relation to training will determine how we can best help the athlete recover and regenerate.

The balance between exercise and rest is an adaptation to energy “E” expenditure. Workloads taxing the individual (catabolic) need to be moderated to ensure recovery (anabolic). The inherent gradient between these two extremes is represented by the “E” requirements for the mechanical performance of muscle, the conduction of the nervous system and to some extent the thermal work for the maintenance of temperature gradients. The latter is associated with the cellular level ensuring the proper functioning of the enzymes. In addition to proper “E” balance nutrition and mental training aides in the process of the recovery of the body.

Another way to view adaptation and “E” expenditure is protein synthesis; the need to expose the body to the proper load factor, load processes and load structure that ensure the process to adaptation. Exposure to the proper amount of the stress to bring about a growth with minimal “breakdown” is the “holy grail” of proper training.