First, Congratulations to Kim Collins on his recent 6.48 60m win in Moscow.  Anytime someone runs a sub 6.50 60 meter is enough to impress me.  Especially at age 38.

Whether he is clean or not is NOT the topic of this article.  I already wrote 6 Reasons Why Kim Collins is Clean. 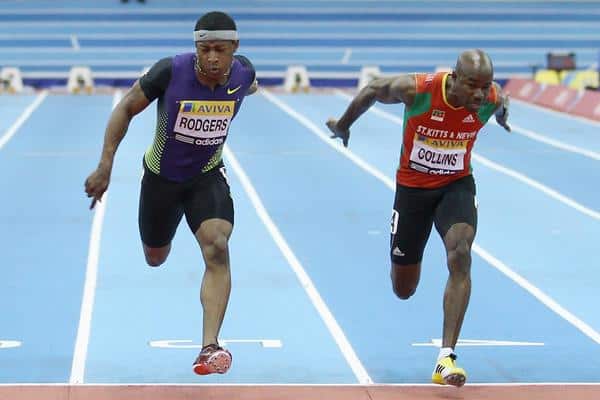 You can talk all you want and hypothesize a 60 meter to 100 meter extrapolation.

The answer is yes, if you can run 0.82 for the next 40 meters with exceptional speed endurance.  These tables or conversions assume a maximum velocity to 60 meters, followed by speed endurance maintenance for another 20-30 meters, and a deceleration anywhere from 10-15 meters.

Based on previous world records, a conversion of 1.53 or 1.54 would give you approximately 9.91 – 9.97.   Kim Collins PB is 9.96.  Still pretty impressive, but no 9.69 which is what the whole world wants to see. At least to non-track fans where the only thing that matters is a world record. 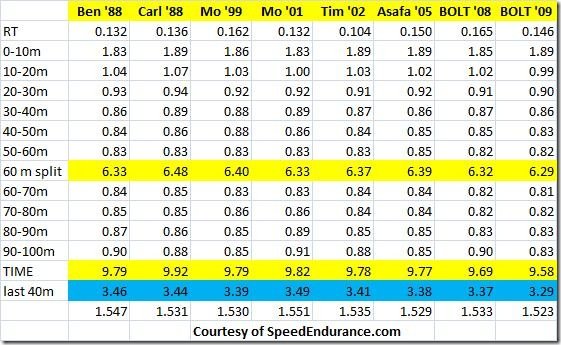 Women’s athletics have it tough with so many records out of reach from alleged drug use. The Pole Vault and 5000 meters are the only events where records are being broken.  (add the new events like Steeplechase, Hammer Throw and Triple Jump)  Forget the 100mH-100-200-400-800 and forget the 1500-3000-10,000 meters. Even a 2.09 HJ or 7.52m LJ can make Men green with envy. Financial incentives for breaking world records will be tough for the ladies!

One poster on the T&FN forum suggested you can extrapolate a 100m using 2 x 60m time minus 3 sec, which to me just doesn’t add up.  But does it?

The problem with any conversion of a 60 meter race is Super-Elite athletes today like Usain Bolt and Tyson Gay are accelerating to maximum velocity well past the 60 meter point… up to 70 meters.

So for those Super-Elite athletes, just take those tables and throw it away.

Unless, of course, you want to have indoor 70 meter races with extra large crash mats!  Then we can talk 70 to 100 meter conversions.

If you take Usain Bolt’s 60 meter split from Berlin, multiply by 2 and subtract 3, to you get:

Or for Kim Collins,

So is this the new formula?

And why are the indoor times slower than the outdoor splits?  Even with the lean for the tape?

Take a look at the chart below and it’s clear Maurice Green ran close to his potential indoors, which explains why he still has both indoor world records 14 years later.  Bruny Surin’s times are slightly faster for the outdoor equivalents, but nowhere near Usain’s Bolt’s 5.47 and 6.29 split times.

Where are the others?

Now take a look at the first charts above, and compare to this: 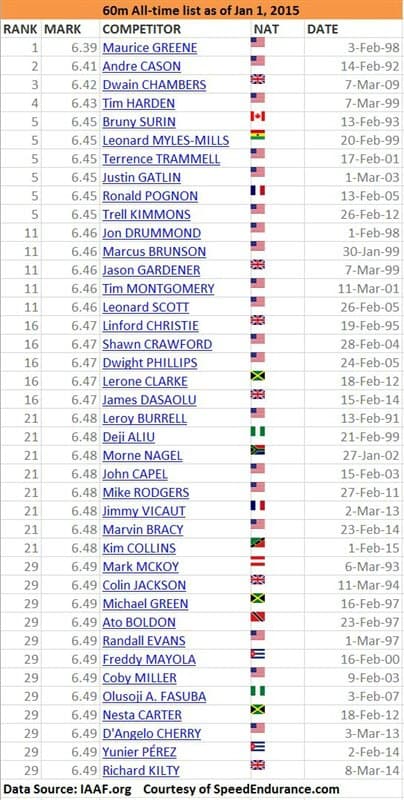 In fact, there are only a handful of performances from the last 10 years that make the top sub 6.50 list.

I am glad Mo has the WR, because when Andre Cason held the WR, we all thought shorter vertically challenged athletes were better at acceleration. Look at Bolt’s 5.47 and 6.29 today and I rest my case.  So throw that theory out of the water.  It’s

If we are indeed getting faster, why aren’t we seeing faster 50 and 60 meter times?

There are several reasons for this.

The Real Reason Why

But wait, I said there were 6 reasons?

#6 – It’s because they are afraid of crashing into the wall.  Psychologically they are slowing down.

But what does impress me is are the non-sprinters in that list, like Long Jumper Dwight Phillips and 110m Hurdler Mark McKoy (speed is everything!)

Bring on the Outdoors!