This video is almost five years old, but there’s a lot to be learned from it.

Take a look at this April 2010 training session on YouTube with Asafa Powell and the MVP group (when he was still with MVP).

Note how the group “race” four at a time.  Even mixing men and women.  I assume they have 4 timers, too.   This was filmed before MVP started using Freelap Timing Systems.

And notice NO BLOCKS.

Should you do Time Trials alone or in a group?

First and foremost, this isn’t cycling or speed skating and I am sure the opinions are mixed.  Weaker athletes will definitely get drawn faster with a faster athlete in front.  Women can feed off the men, though it must get discouraging to see the men pull away. 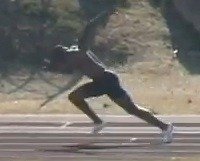 Ironically, Asafa Powell is so fast, has the sound of train horns as he sprints.

Should you do Time Trials Alone or in a Group?

When doing time trials during testing week, should you run alone, or as a group?

My early days with Coach Dennis Barrett were always in a group to simulate a race condition.  Some of us didn’t use starting blocks because our Club only owned two!  As an Alan Wells fan, I would say “screw it” and get down on all fours on the track.  No blocks, as long as you are wearing spikes.

Later in my Masters years when I moved out West and trained with Laurier Primeau and Kevin Tyler’s group, time trial runs were always individual.  I’ll admit, I had a hard time adjusting to that concept.  The coach only has one set of eyes, so it’s best to run them alone.

[Tweet “POLL: Should you run your Sprint Time Trials alone, or in a group?”]

Today, we bring along our video cameras or use our phone or tablet for immediate feedback.

Running alone means no distractions for the runner.  No racing, no tensing up (or getting discouraged) trying to catch the person ahead of you.  Just relax and focus on form and technique.

Let the Freelap and stopwatch tell the tale.  You can’t improve what you don’t measure.